Sure, Iowa just scored a big victory over host Purdue, 24-10. But how much do we really know? What was really important about beating the Boilermakers? What does it all mean, Basil? The Takeaway has the answer.

Thank goodness it was Purdue. That was a thorough victory for Iowa, the type of performance you'd expect from a team with a considerable advantage in talent. The yardage differential was hilariously lopsided: 420-156 in favor of Iowa, and that's even with a first quarter dominated by Purdue. Iowa left gobs of points off the board (again, so more on that in a bit, obviously) and still won by double digits. Purdue QB Danny Etling looked like he was ready to quit the sport by the end of his day, which is usually a sign your defense has done something right.

Oh, and this marks Iowa's fourth consecutive road victory, the first time the Hawkeyes have accomplished such a streak since a five-game spree that spanned from "55-0" to "7 Got 6." So, yes, lots to be proud of, no sleep to be lost after this one.

And yet... this was a performance that wouldn't have beaten a whole lot of other Big Ten teams. Iowa didn't take its first lead until the 45th minute of the game, and it's not as if Purdue had been playing well up to that point. The running game was anemic once again until the second half. The receivers dropped, what, seven passes? Eight? If C.J. Beathard had a chance to lock up a starting role going forward, he didn't take advantage of it.

The Big Ten West still isn't—how you say—good at the football, but Northwestern just skunked Penn State in Happy Valley and Minnesota might have gotten Brady Hoke fired by demolishing the Wolverines at the Big House. And god, the hurt Nebraska put on Illinois. If Iowa plays like it did on Saturday against any of those teams, it'll be a big fat L, and it won't be close.

But! Iowa didn't play any of those teams. It played Purdue. Thanks for being terrible, Purdue.

It had no business being that close. Remember when we said this after the Ball State game?

If Iowa goes -16 against anyone on its Big Ten schedule, it's almost certainly going to lose. The talent disparity won't be there to bail Iowa out against its peers in recruiting, and even bottom-feeders like Illinois, Purdue and Indiana have quarterbacks who are capable of punishing a still-green Iowa back seven better than Ozzie Effin' Football did.

First, we vastly overestimated Danny Etling's capabilities, because if he's a punisher I'm a spiderman. Second and more importantly, Iowa put that theory to the test with a jaw-dropping -17 performance at Purdue. Here's the breakdown:

Why Iowa didn't take either field goal is mystifying. We're normally huge proponents of going for it, but in each situation the kick was the better call. A 25-yarder would have given Iowa the lead in the third quarter, and a 22-yarder late in the fourth quarter would have pushed the lead to 17, effectively shutting the door on any fluke weirdness. Ferentz clearly (and fairly) still has faith in Marshall Koehn, so it's not as if there were no other options. He just left points off the board in a game where the opponent was struggling mightily to generate its own.

Leaving points off the board is officially a pattern with this team. Here's the damage done thus far this year:

For the record, Iowa didn't convert on a 4th and 1 at UNI's 19 as well, but that wasn't a gimmie field goal and the call made sense, so we're leaving that out of the totals.

As a whole though, Iowa's not playing efficient ball. The Hawkeyes are +3 on turnover margin, but haven't converted a single one of the eight turnovers into points all year. Opponents have converted Iowa's five turnovers into 24 points, meanwhile, and in a season where the average final score margin has been 6.6 points, one score here or there is just a bit important.

All hail the defense, and all hail LTP. Yes, it was just Danny Etling and just Purdue, but good lord, that was a masterclass in snuffing an offense out. Purdue's first drive went just 29 yards and ended in a punt. We didn't know it at the time, but that would be the longest drive the Boilermakers had all day long. After Purdue drove 21 yards on a short field for a field goal to make it 10-0, here's what Iowa allowed the rest of the way. 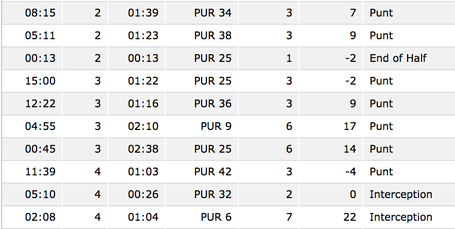 That, friends, is laying waste to an offense. Purdue was pretty low-octane coming into this one, but nothing it tried to do on Saturday worked. By halftime, it was obvious that only several more serious mistakes by Iowa could lead the Boilermakers to a victory, and those mistakes never came.

As with all dominant defensive performances, this was a team effort. Iowa's secondary let Purdue do nothing downfield, which let the front seven key on the run—which it did with aplomb. Akeem Hunt was strong early, with 55 yards coming in the first quarter, but he finished with only 90. Fellow tailback Keyante Green mustered only eight rushes for 20 yards. And poor Danny Etling was run down time and time again for a grand total of -35 yards, which... seems bad? It might be bad.

I can't say enough about the defensive line and what it has rounded into. The starters combined for 14 tackles and four TFL, including three sacks. Nate Meier and Drew Ott were terrors on the edge, combining for 10 tackles and 2.5 TFL. Louis Trinca-Pasat only recorded two tackles, but one was a sack and he swatted down a pass. He and Carl Davis commanded double-teams frequently, and Purdue blockers were almost never able to get to the second level to spring longer runs.

Trinca-Pasat still astonishes me. He's gone from "how is he beating out Jaleel Johnson?" to honorable mention All-Big Ten to—let's be honest—the team MVP in about a season and a half since coming back from a shoulder injury that kept him out for all of 2012. LTP is third on the team in tackles with 33 (Lowdermilk and Quentin Alston lead with 36), including 5.0 TFL (second only to Ott at 5.5) and 2.5 sacks (again, only Ott ahead at 3.0). He's even knocked away two passes.

Most of all, though, opposing teams just cannot run between the tackles at Trinca-Pasat. Even mighty Pitt tried—frequently—and by the end of the game it was Trinca-Pasat asserting his will on the Panther offensive line, and not the other way around:

If Trinca-Pasat's not the most valuable player on the team, who is? It's not Rudock or Beathard. None of Iowa's skill position players have merited the honor, nor has anyone on the offensive line (sorry Brandon Scherff, but not yet, nah). And on defense, the only other guy who might make a claim is Desmond King, and even then he's not the linchpin on defense—it's the front four as it dominates the line of scrimmage, taking away the ground game for teams trying to protect their leads. And the guy leading the way on production is the Human Volkswagen himself.

SO! With that, Iowa's 4-1, just like most people expected the Hawkeyes would be at this point. We're into the first bye week, so everyone catch your breath, hug a dog, remind your spouse you love them, whatever it takes to reorient yourself with the important things in life. Get back in touch with reality, then buckle up for the QB controversy—it's coming.