THE HYBRID: MICHIGAN HITS A LOWER BOTTOM, PURDUE EVOKES NOTHING

Share All sharing options for: THE HYBRID: MICHIGAN HITS A LOWER BOTTOM, PURDUE EVOKES NOTHING

The Hybrid is a weekly preview of every Big Ten game, plus relevant or whimsy games from the national slate.

The column is pretty fat this week, so we're skippin' the intro.

Also, there are no ranked teams playing each other on Saturday, so this is also our Game of the Week.

Unrelated/related to the SEC: I was going to spend some time praising Alabama, their new/cool QB, their emerging/completely exciting vertical passing attack, and embed the new Sabes banking commercial -- but they're off this week. I was then going to stick all of it in the Florida section, since they got pasted by the Tide in a "your program is over" loss last Saturday -- but they're also off this week. Oh well.

South Florida at Wisconsin (19): Are we in Big Ten play or not?

Also, big shout out to Wisconsin for pulling off the somewhat rare "power running team running up the score" that kind of started to become their staple under Bret Bielema.

Iowa at Purdue: Very happy with the Pitt win last week, but Purdue is a team that evokes nothing out of me, so that's why this section ends now.

Northwestern at Penn State: Pat Fitzgerald usually rubs me the wrong way, but I loved this:

Lots of dead air during Pat Fitzgerald's stint on B1G teleconference: "That's what happens when you're 1-2, buddy."

Tulane at Rutgers: Really losing all patience for handling these stupid games.

Oh, and here's another "Rutgers being Rutgers" story...

Multiple people interviewed by NJ Advance Media -- who would speak only on the condition of anonymity because they feared retribution -- said Hermann was talking about "reaching out and touching the donors" of the program and her punchline was to not do it "in a Sandusky way."

Rutgers acknowledged the comment and defended Hermann's words, saying it was an off the cuff remark that wasn't directed at Penn State.

"It wasn't directed at Penn State, it was directed at a former employee Penn State kept around for decades. Not really sure why you'd think that'd reflect poorly on Ped--I mean Penn State."

Maryland at Indiana: Maryland's first conference game as a Big Ten member. Just in time to catch Indiana before the Hoosiers make their move to the SEC West, where wins apparently come easier.

Minnesota at Michigan: I'm going to do my best to make this section not have 95 bullet points. Suffice to say, Michigan is the worst. The worst. They're like if Greg Davis coordinated an offense and defense. It's not even just losing. It's how they lose. It's the indignities that come with almost everything they do. It's sad, futile, embarrassing, and prolonged.

Here are things that happened:

- The Utah dude did the Desmond Howard Heisman pose in the Big House after his punt return TD last week; karma is a bitch, Blue

- Starting QB Devin Gardner got benched, true sophomore Shane Morris came in, picked up one first down for fake hope, threw a soul-crushing pick... and then the game had a lonnnnng weather delay

- The Big House flooded during the weather delay. This tweet happened:

If they resume the game just have Michigan go towards the flooded end zone. You know they won't be anywhere near it.

- The game resumed a million hours later, where Michigan lost heroically and continued to score no touchdowns; during this stretch, down two scores with sub-10 minutes left, SPENT TIME HUDDLING ARE YOU SERIOUS YOU JUST HAD A FUCKING LIGHTNING DELAY TO COME UP WITH YOUR NEXT SEVERAL SERIES WORTH OF PLAYS AND YOU CAN'T BLAME IT ON THE BACKUP BECAUSE HE WAS IN THE GAME BEFORE THE WEATHER DELAY YOU ARE NOW WISCONSIN

- The rise and fall of the coke-for-tickets promotion

- In the epic blowout losses to Utah and Notre Dame, Michigan has actually outgained both opponents and (somehow) has the best defense in the Big Ten. Hit me, SB Nation's Bill Connelly (emphasis mine):

It takes a spectacular, steady rate of failure to pull this off. It takes a place-kicker just trustworthy enough to send onto the field and just shaky enough to miss (Matt Wile missed field goals of 46 and 48 yards against Notre Dame). It takes a flawed quarterback (Devin Gardner, he of nearly 3,000 passing yards and 500 rushing yards last year) who is just good enough to continue to produce and fail. (It also helps that his backup, 7-for-20 Shane Morris, hasn't taken advantage of opportunities either.) It takes a defense good enough to shut down a decent opponent's run game (Utah and Notre Dame: 2.0 yards per carry, 2.9 without sacks) and stay just close enough that the offensive failures matter.

Outlook for the rest of the season, Bill?

Seven of the next eight conference games are winnable, and eight are losable.

Fortunately, former QB Michael Taylor put the school on blast. I thought it was gonna be some stereotypical former player saying "DURRR, I wish we ran a better progr'm" -- and yeah, there's some of that -- but he takes it to another level, makes my life better, and calls for the head of Michigan AD Dave Brandon (ecstasy emphasis mine).

"After the season? I'll put it this way. Didn't Dave Brandon come out and say he'd judge Rich Rodriguez on red-letter football games? ... If you judge Brady Hoke on red-letter football games, where do we stand? That's all I'm saying, is that the treatment given to Rich Rodriguez should be given to Brady Hoke. He preached toughness, he preached the downhill running game, the Michigan defense. The proof is in the pudding. And 12 games, 4-8, mediocre completion, it is what it is. I'm not here to say whether the man is going to be fired; I don't make that call. All I do know is Dave Brandon should not be let to make another decision at Michigan. Period."

Was all of this almost completely tainted after he endorsed Jim "Shithead" Harbaugh to be the head coach? Well, it's Michigan, so yeah. But, man. Dave Brandon getting axed would be almost as sweet as winning at national title (or a single game, period). Champagne would just taste better that day.

Arkansas vs. Texas A&M (6) at Jerry World: Kenny! I really wish I were a Tony Romo hater, only because I could make the "Will Kenny Hill be the best Texas QB this stadium sees all year?" joke. It would have been so easy.

As for the Arkansas side of things...

Arkansas has signed 4 of the Top 20 TE recruits. A glimpse of next year's base offense (via @LSUFreek). pic.twitter.com/yT5F9j8Ozh

Texas at Kansas: Do we go with the story about Texas' QB thinking they can make the playoff this year even though they already have two losses, or the one about head coach Charlie Strong dismissing his ninth player from the team since taking over less than a year ago?

Colorado at California: Sorry, Cal -- this section gets a full RichRod takeover after your big time choke against Arizona last week. Don't worry, we'll still use the third item to make fun of you.

2) RichRod, blowing that high school RB's inspirational speech out of the water with this gem following the Hail Mary victory.

3) Don't worry, Cal -- we didn't forget about you. Just like you didn't forget to wait till the Arizona game was over before announcing a 25% off hats victory sale. But don't worry, the story has a happy ending:

Sorry everyone, we just got a little bit too excited. Our mistake is your win. The hat sale is still on. Have a great weekend.

I love when companies and stores have Twitter handles. The "Have a great weekend" part was probably my favorite.

Stanford (16) at Washington: Shout out to David Shaw, one of the only people lame enough to ruin one of Kanye's coolest stadium songs.

Cincinnati at Ohio State (22): THE BATTLE FOR OHIO.

Related: I need to know I'm not the only person (...man) in the world uses the Cincinnati song from "Babes In Toyland" as a guide each time I spell Cincinnati.

Speaking of South Carolina-related things I actually care about... whatever happened to Jadeveon Clowney? I know he got hurt in Week 1 of the NFL, but is he, like, gonna be out for a while?

Memphis at Ole Miss (10): Ole Miss, despite being awesome, playing in a marquee conference, loaded with random talent, and smart enough to (probably) pay their players the big bucks, still feels like they're flying under the radar. They have 'Bama next week, so that'll obviously change.

New Mexico State at LSU (17): Nice loss, bros. Well, your season is no longer interesting. And since Mississippi State beat you last week and they're off this week, this tweet goes here:

if you go to miss st and you couldn’t make it happen last night, it’s time to transfer.

Baylor (7) at Iowa State: I know we just talked about Ole Miss feeling under-publicized, but how about the Baylor Bears? If I've learned anything in my life, it's that you absolutely do not sleep on the Baylor Bears.

Leftover Clones item: anyone legitimately mad at the Iowa State linemen posing shirtless at Kinnick after pwning Iowa two weeks ago should very much get over it. I think I saw Sash use the classic "Stay classy" retort. Which, you know, means nothing and anyone can say for anything (like I was about to with Rutgers earlier in the column before realizing I was gonna rant about it in this section!). It's one thing to see it and get irked because your team lost, but you have to ask yourself if our guys did the same thing at Jack Trice, how would you feel? It'd be hilarious. Seriously, look at the dude third from the left and tell me you're that mad about it.

Washington State at Utah: Spirited effort from my Cougs in a close loss to Oregon last week. Though I'm proud with the effort, I still gotta do it...

Did Connor "The Limiter" Halliday limit his interceptions to one or two a game? Yes.
How many interceptions did he throw? Zero! He seriously didn't throw any! (First time that's happened all year)
Who did Washington State lose to? Oregon. Seriously, no shame in that game. Though Marcus threw for 5 TDs to Halliday's 4, The Limiter passed for nearly 100 more yards than (almost unarguably) the best QB in the country. Moral victories, people.

Illinois at Nebraska (21): No Geronimo Gaiety last week, since he was hurt. But we did have, well...

That's right, we got a banner! After falling behind to Texas State last week and becoming another lightning delay victim, the Illini roared back on the power of a 7 catch, 90-yard performance from WR Mikey "MD Flash" Dudek, which also featured the go-ahead touchdown for Illinois. 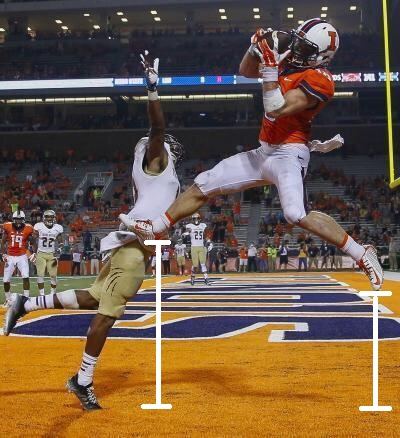 Good things can exist. Also, are we sure he has a face?

All of that said, Ameer Abdullah is a monster and the Illini are in a heap of trouble this week.

Oregon State at USC (18): Was gonna give this game the Lana "NOOOOPE" clip, but the Beavs are undefeated, so I'll hold off.