I RODE A HORSE

This is for you, BHGP. I got on that dang horse for you.

Share All sharing options for: I RODE A HORSE

I am not a man of impeccable judgment. That's not news, but the notion that I could avoid ever riding a horse by setting the BHGP Touchdowns For Kids goal at a whopping $400 per touchdown (like that was somehow out of your reach) was a sensational miscalculation.

So as we march ever onward in the season, the pledges roll in, and the BHGP community is so far past $400/TD (we're nearing $600, in fact) that the day I thought would never come—the horse day—already feels somehow overdue.

Well, it did until Saturday morning.

I showed up to the barn of the Whistlestop Farm right outside of Mount Vernon that cold, wet, morning. Wait, let's back up an hour—I put this shirt on, then I went to the farm. 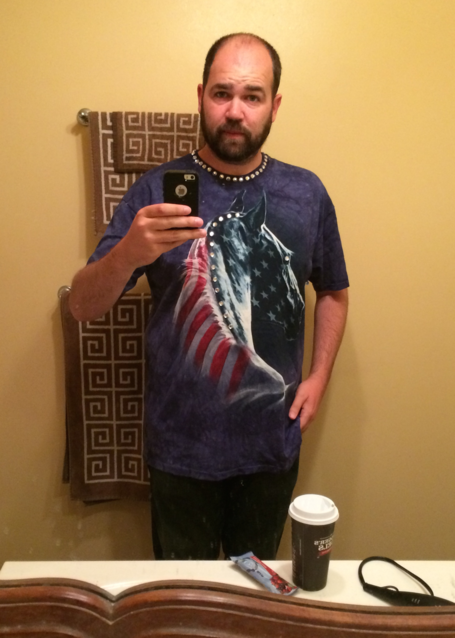 Yes, that is a Bruegger's coffee, LADIEEEES.

Anyway, once there I met the horse that you people—you generous, sadistic people—put me on. It was a trepidatious moment, to say the least. 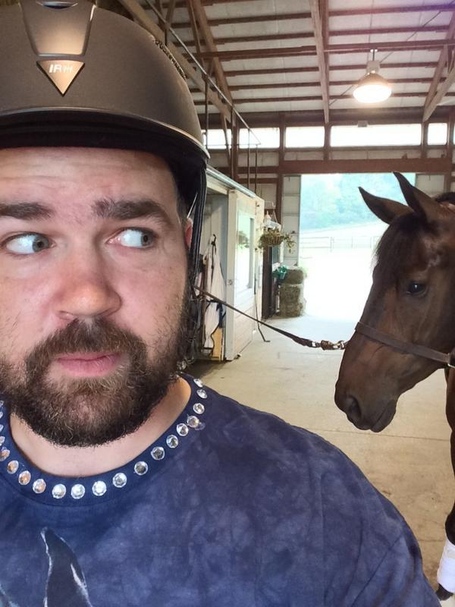 Well, it turns out the horse has a name and a story—and it's a very special horse. He's a Swedish Warmblood named Gaelen, and despite being only eight years old, he's already a Level 4 dressage horse. As I understand it, this is a very remarkable accomplishment for a horse of such youth, and Gaelen has a very bright future as a famous horse.

Let me tell you something, BHGP: it is quite a thing to be placed atop one of the most important horses in the state of Iowa when you don't much care for horses. 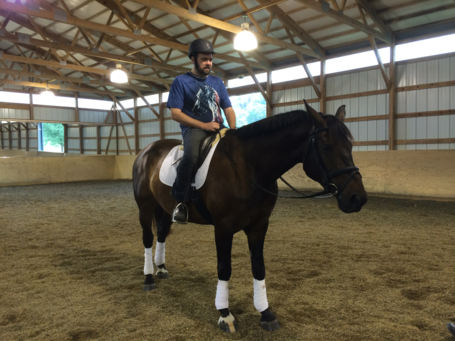 You can really sense the chemistry.

Here's the thing about horses. When they start to trot and all that, you're only bouncing like a couple inches off the saddle, and only for a half-second at a time, but in those moments, your brain's like "okay we're being launched off of this horse, so I suppose this is how it ends, I hope they weren't kidding about the ground being soft. In other words, dear readers, my noises of discomfort are sincere:

But you know what else is a thing about horses? They are fun and nice and exciting! I had a lot of fun! I got to pet the horse a lot and it was totally fine with that, and I got to feed it an apple and it ate the apple right out of my hand. The thing about keeping your hand flat so the horse doesn't bite your fingers is real, but oh man the horse is just not interested in human fingers when it has a sweet, sweet apple to devour. I gave this horse nourishment, people!

After the riding session was done, they asked if I wanted to see some more tricks, and it's like, of course I want to see more tricks! Did you know horses can play music? Well, Gaelen can, anyway.

The horse did not ingest the rubber part of the horn, so don't worry.

I guess what I'm trying to say is the shirt was right the whole time. I HEART HORSE.

The power of #HORSESFORHAWKEYES is real, people. It's not an accident Iowa won mere hours later. More on that game later today.

[NOTE: There is more video—including Gaelen going happy-go-jacky on a cardboard box because that's kind of his thing—but it all needs to be edited down and made pretty, and we didn't want to sit on all this horse goodness and not share the news with you just for the unmade video's sake, especially since I had already mentioned it and put a lot of pictures on Twitter on Saturday morning. But yes, sometime relatively soon, you will be able to see what a special horse Gaelen actually is.]