CHRISTIAN KIRKSEY HAS TINY LITTLE EVERYTHING

Everything, that is, but heart. Actually, his heart is pretty small, too.

Share All sharing options for: CHRISTIAN KIRKSEY HAS TINY LITTLE EVERYTHING

Christian Kirksey, who was drafted by the Cleveland Browns in the third round of this year's NFL Draft, was supposed to be one of a new breed of Iowa linebackers: Smaller, faster, better equipped to handle the spread offenses of modern football.  But while we always knew that Kirksey was somewhat undersized, the newest version of Madden proves that we were giving him way, way too much credit:

In real life, the Browns rookie linebacker is listed at 6'2", 235-pounds. In Madden 15 though, Kirksey is listed at 1'2", 235-pounds -- and he plays for the Titans. One-foot, two-inches is a big for a Smurf, but it's incredibly small for an NFL defensive player.

It's just as funny as you'd expect.

HE GOT THE FUMBLE pic.twitter.com/O8rg8hdhlj

Here's some footage of Lil' Christian defending a pass, taunting the other team, and jumping approximately seven feet into the air to high five a teammate (original footage via Shake4ndBake on Youtube):

Iowa football has a history of players who have short appendages. Both defensive tackle Karl Klug and offensive lineman Riley Reiff were knocked by NFL scouts for their tiny little arms, and if you ever looked at them, you could see why.  But not since Dominic Alvis has Iowa had a player who, like Kirksey, was simply tiny, though Alvis was being tiny solely to pay homage to a Saturday Night Live skit from the 1990s.

This is the second Iowa-related glitch found in Madden 15. Last week, it was discovered that Brandon Scherff is an unlockable bonus character when playing with the St. Louis Rams:

UPDATE: Our very own hawk6894 went back through the archives and found this photo from last year's game against Northern Iowa. 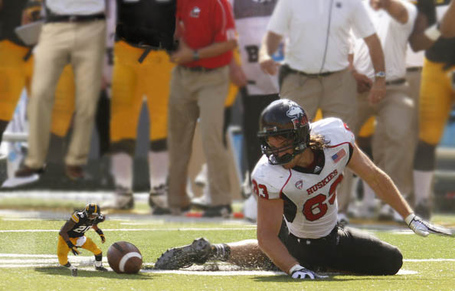 Maybe it's not a glitch, after all.