IT'S NOT PLAGIARISM IF YOU LINK TO IT: IOWA VS NORTHERN IOWA GAMEDAY

Kickoff is soon, let's talk about it.

Share All sharing options for: IT'S NOT PLAGIARISM IF YOU LINK TO IT: IOWA VS NORTHERN IOWA GAMEDAY

GAME DAY. Iowa vs. Northern Iowa kicks off at 11:00 am CT on the Big Ten Network. The game will also be on the radio. WHO 1040 for Des Moines. WMT 600 for Cedar Rapids. For an online stream, check out BTN2Go. There's not a vegas line but offshore betting sites have the Hawks -15.

Attention, @HawkeyeFootball fans: Use our GameFinder to catch all of the action tomorrow - http://t.co/wSuZVRZLRr pic.twitter.com/GJywcfvMr3

HERE'S YOUR WEATHER. Looks like the rain is out of the forecast and the temps look mild. 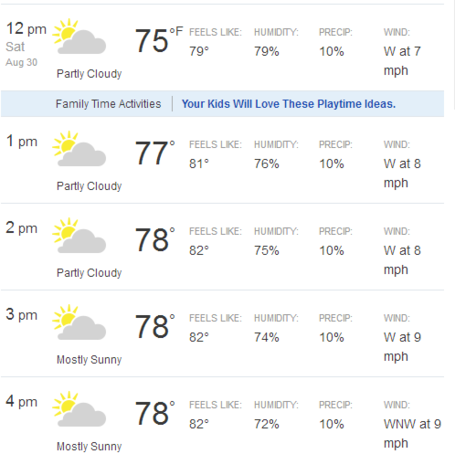 BECAUSE OF THE RAIN. Iowa has announced special parking exceptions for the Finkbine Golf Course parking area.

LET'S GO RIGHT TO PREDICTIONS. You're probably not going to find many that will pick an FCS upset. So, Iowa is the unanimous pick on ESPN.com's Big Ten blog. I'm not looking too hard beyond that. This predictions section will bulk up as more important games lie ahead.

TWITTER LIST. If you're new here. This is a list of Iowa media that will have updates up until kickoff (and beyond). Stay informed with the latest from the booth.