Some other fun moments from Monday's festivities, courtesy of our intrepid horse reporter Neigh Leman.

It's the 2014 Big Ten Media Days, and BHGP has sent correspondent Neigh Leman to Chicago to cover the proceedings. Neigh Leman is a horse. Adam is not happy about this because Adam doesn't think horses should do journalism. Nonetheless, he's been overruled, so here we are. Neigh Leman's thoughts and observations have been transcribed herein. We cannot vouch for the accuracy of anything Neigh Leman says; to repeat, he is a horse.

Given what I know about Adam Jacobi, I was expecting the worst from the Big Ten's coaches and writers.  I'm happy to report that I could not have been more wrong.  The Big Ten has welcomed its first horse reporter with open arms!  Here is Michigan coach Brady Hoke exchanging his signature "double point" with me in the hallway. 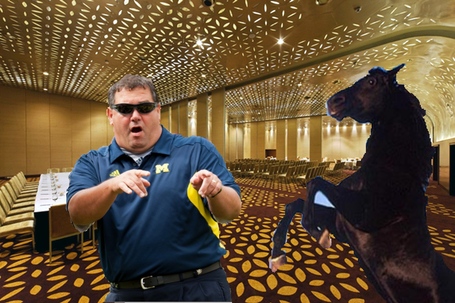 And here is a video that Illinois coach Tim Beckman made for me.  He told me to play it when he gave the right answer to a question.

Michigan State sent me a picture of my own butt!  It was kind of weird. 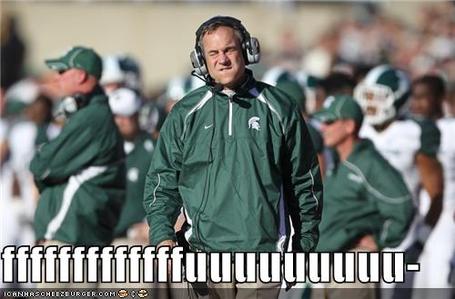 Rutgers has a horse for a mascot, a serious neigh-neigh among those in the equine community.  When I asked an administrator about backlash to the decision to use a horse as a mascot, the Rutgers administrator threw a basketball at me and called me names.  He was immediately fired and replaced by someone who had thrown basketballs at horses 20 years ago but denied any memory of the incident, and yada yada yada Gary Nova transferred to Iowa.

Anyone who thinks that Ohio State is the only sports franchise in the nation represented by a poisonous nut hasn't met California Chrome's owner, amirite?!?!?!

The big trend in the Big Ten: Teams hiring coaches that look like their mascots.  Minnesota got it going with the gopher-faced Jerry Kill.  Iowa's Kirk Ferentz looks a lot like Alan Alda's "Hawkeye" character from M*A*S*H.  And Penn State got into the act this year by hiring James Franklin and changing their mascot to the Penn State Walking Recruiting Violations.

Welp, that's it for Monday at Big Ten Media Days!  Here's to the hope that someone actually says something newsworthy tomorrow!