EXPOSED: CARL DAVIS IS A VAMPIRE

Let's hope no other Big Ten teams have a Van Helsing on their squads.

Share All sharing options for: EXPOSED: CARL DAVIS IS A VAMPIRE

Damn you, Delanybot 9000.  Do you know what you've done?  You've managed to piss off Carl Davis by not scheduling Iowa for any night games.

"Getting up early sucks, you know," said Carl Davis, Iowa's towering defensive tackle. "I wish we could have had some night games.

"Those are always fun."

Hawk Central cites some mundane reasons for why Davis would prefer to play at night -- it's more fun, his muscles are more "woken up" -- but I think we all know that's just a cover-up.  The real reason Carl Davis wants to play night games is because he's a goddamn vampire.  And when we say he's a vampire, we're not speaking figuratively or using some flowery metaphor about how he sucks the life out of the opposing team's running game from his position in the heart of Iowa's defense.  He doesn't want to "suck the life" out of Wisconsin's running game; he wants to literally plant his giant incisors in Melvin Gordon's neck and drain every last drop of blood out of his carcass.

Just take a look at this picture of Davis from the 2013 football season: 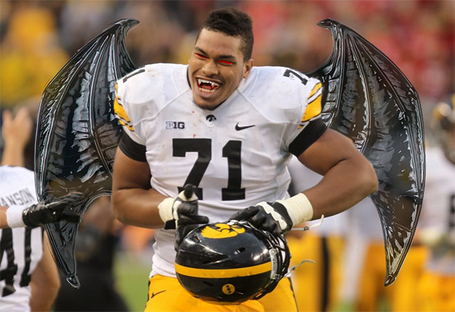 Pretty damning evidence, no?  Frankly, I don't know how we didn't realize it before now.  Vampires are often called "nosferatu," and some sleuthing from BHGP's intrepid crew of linguistic investigators has discovered that that archaic term is actually just a bastardization of the full expression, "nose tackle comin' for your precious bodily fluids." 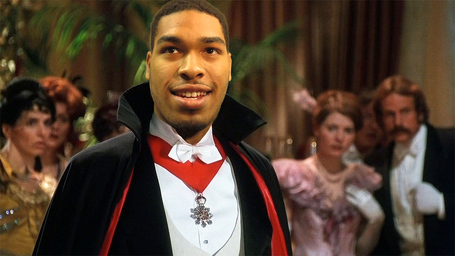 Now we're not saying it's a bad thing that Carl Davis is actually a godless creature of the night bent on terrorizing townsfolk and sating his bloodlust by sinking his teeth into the soft, fleshy necks of unsuspecting humans -- far from it!  Iowa's best defenses have often featured players who were just this side of normal -- Bob Sanders was basically a human Tasmanian Devil and 2009 Adrian Clayborn was basically the Predator minus the scales and the cloaking technology.  If we can ride Carl Davis and his inhuman vampire rampage to a Big Ten title, so be it.  You can't make omelets without breaking a few eggs and you can't win a Big Ten title without leaving a few blood-drained corpses in your wake.

Big hat tips to Tony, Horace E. Cow, and hawk6894 for their invaluable assistance with the images in this post.  Many, many thanks, fellas!