Chris Doyle tweeted this out yesterday and in addition to marveling about the fact that Greg Mabin's torso appears to be carved out of marble and LeShun Daniels seems to be crazy-strong, something else about the image struck us:

#getbettertoday Mabin on the battle ropes & Daniels knocking out push ups with 180lbs. of chain. pic.twitter.com/t5O3OTzxee

There was something familiar about Daniels... but doggone it, we couldn't quite place it.

And then it hit us: 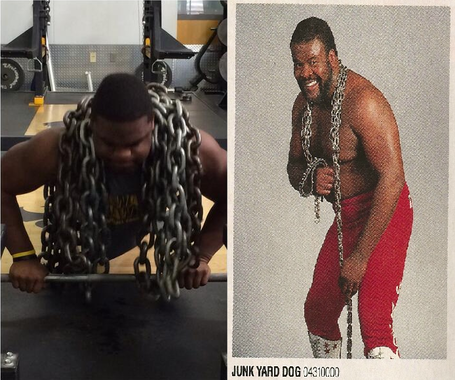 Is it a penalty to start barking at opponents after driving them into the turf on the way to a touchdown?  DON'T KNOW, DON'T CARE.