The league's attempts to establish itself in the five boroughs have been wildly successful, with Midwestern culture taking over every aspect of New York City life. 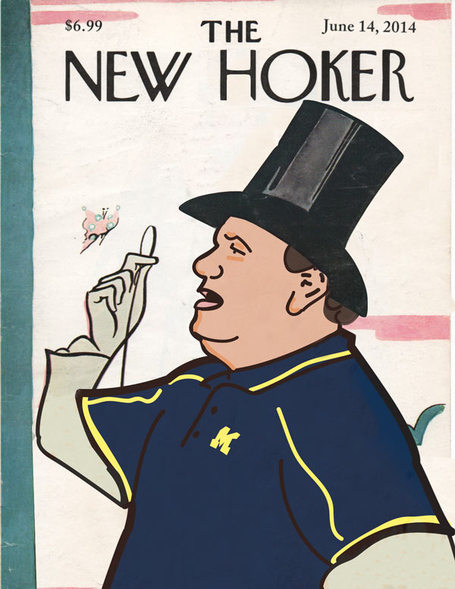 When the Big Ten Conference added Rutgers University, the goal was to establish a beachhead for the league in the largest metropolitan area in the country: New York City. Although the Scarlet Knights have yet to play a game as an official member of the conference, early evidence has emerged that Big Ten fever has taken hold in the Big Apple, with Midwestern fashion, food and culture gaining wide popularity in the famously cosmopolitan city. 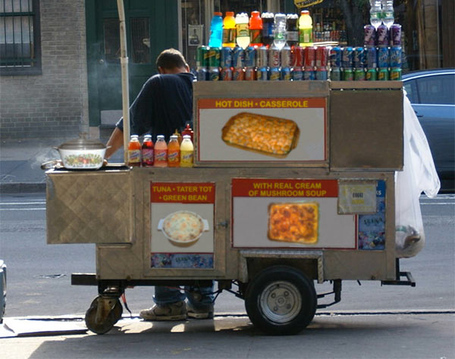 Once an icon of the New York streets, the hot dog stand has now faded into dim memory, with vendors now scooping piping hot portions of casserole into styrofoam bowls at $3.00 a serving. Sales of Campbell's Cream of Mushroom Soup have reportedly gone up 500% in the New York area since 2013. 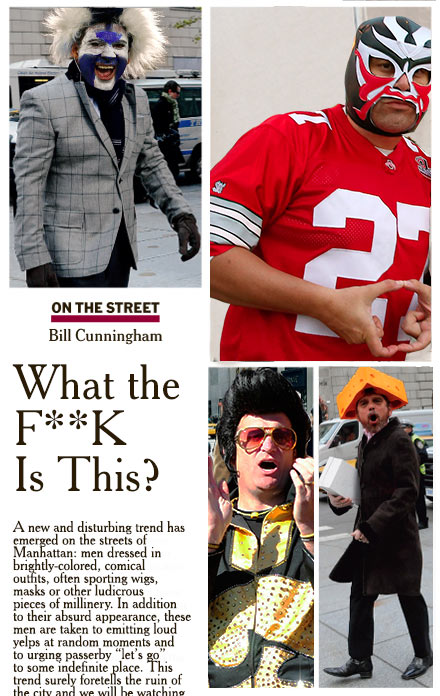 "It was ... unsettling," said Cunningham. "At first I thought it was there must be some sort of conference or bowl game being held and that these were tourists, but after talking with these people, I discovered that they were authentic New Yorkers. They actually wanted to dress this way."

Although the conference recently opened offices in New York and held a "New York selfie" contest to celebrate its new forays into the city, the response of New Yorkers has far exceeded league expectations.

"I am just pleased as punch," said conference commissioner Jim Delany. "I mean, I had hopes that adding a team based in New Brunswick, New Jersey would gain us more followers in the New York area, but a full-scale cultural takeover? No, that is above and beyond what we anticipated, honestly."

In addition to the more superficial changes in cuisine and clothing, a new Midwestern spirit has taken over the city. Famous for their verbosity and willingness to argue and complain about even minor ailments, New Yorkers have recently taken on a newly taciturn, stoic demeanor. Streets that once rang with the noise of horns and shouting have fallen eerily silent as the city's residents have learned to absorb the irritations of life in the same way that a Minnesota farmer absorbs another day of -15 degree weather.

This reporter recently overheard the following exchange on a subway platform in Manhattan: One man remarked: "There was an accident on the F train – Looks like we'll have to walk to Brooklyn," to which the other quietly responded, "Yup... yup. Well, let's go then." The conversation was remarkable for its complete lack of profanity and low decibel level.

Moss confirmed that a new level of politeness has gripped the city. "I was walking in Greenwich Village when I saw this guy step out into a crosswalk and nearly get hit by a cab. I braced for a loud argument, but the cab driver just rolled down his window and said, very nicely, 'Oh, were you walking there? Were you walking there? I'm so sorry.' To which the man said, 'No, I'm sorry. I shouldn't have been walking there.' Then they shook hands. It was the damndest thing."

Even the city's famous non-stop energy has slackened. "We used to be known as the 'city that never sleeps', but residents have settled down now," said Moss. "Now we're the 'city that gets to bed by a sensible hour.'"

Not all of the changes have been positive. Doctors across the city have reported an increase in obesity levels and heart ailments as the rich, dairy-based diet of the midwest has taken hold. "I see a lot more patients wearing sweatpants," said Dr. Richard Hopkins, a primary care physician at St. Luke's in Manhattan. "And those sweatpants usually have some sort of cheese stain on them." Statistical evidence corroborates this observation: a survey taken earlier this year showed that the average body mass index for New Yorkers had gone up from its 2013 level of 25.2 to a new high of 28.3. 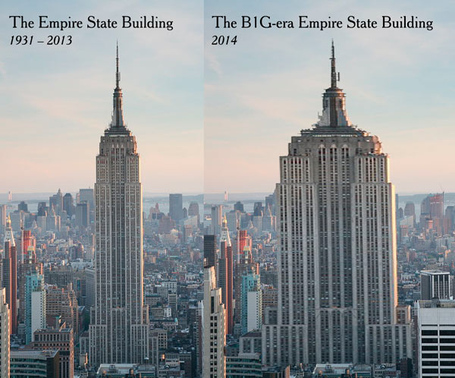 Even the buildings seem to have grown in girth since the arrival of the Big Ten in NYC.

Time will tell if Big Ten culture will remain a lasting force in New York culture, but many residents are not waiting to find out. Upon returning from the Cannes film festival this May and discovering that the beloved Film Forum had been replaced by a Blain's Farm and Fleet, director Woody Allen is reported to have remarked: "F**k this shit. I'm out of here." He and several other New York luminaries are rumored to be planning a colony for traditional New Yorkers "anywhere that Jim Delany can't get his hands on." Possible locations for the colony include Alabama, Louisiana, and the Canary Islands.