IOWA FOOTBALL 2014: THERE WILL BE JETPACKS

Share All sharing options for: IOWA FOOTBALL 2014: THERE WILL BE JETPACKS

For the past few years, we've bemoaned the lack of verticality in the Iowa offense under Greg Davis.  Things have gone sideways for the offense since Davis rode into town on the back of a burro and fixed his gaze upon the assembled Iowa wide receivers.  They were too big, we heard.  They were too slow, we heard.  They didn't fit Davis' intricate offensive schemes, we heard.

But we were only half-right.  The full GD-ification of the Iowa passing game doesn't involve adding a fleet of whirling dervishes at wide out or in the slot.  No, speed and quick twitch reactions alone won't provide the Iowa offense with verticality.  There's one missing piece needed for the offense to achieve operational Death Star status and it's building a time machine to go back and kidnap Vince Young circa 2004 been revealed to us by the new Iowa football poster for 2014: 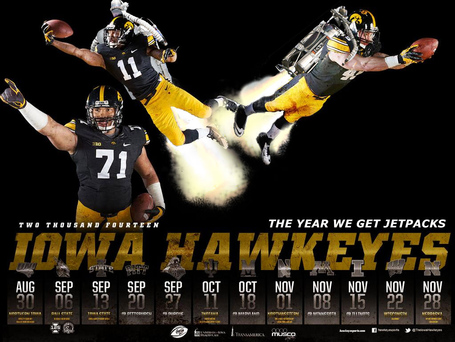 You thought Damond Powell was fast last year?  Just wait 'til you see how many touchdowns he's scoring WITH A JETPACK. 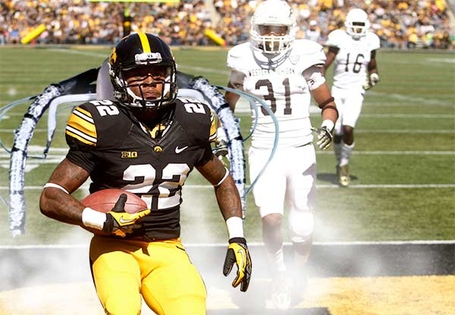 In hindsight, we should have known to expect this.  The evidence was right there from Davis' days coordinating the Texas offense: 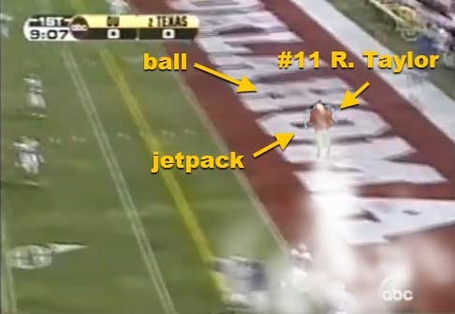 I mean, how else did Jordan Shipley score all those touchdowns with Colt McCoy throwing him the ball?

So get ready for Iowa football in 2014: The Year of the Jetpacks.  The Big Ten better get ready to suck our exhaust fumes.

Hat-tip to Horace for his assistance with the images for this post.  Thanks!