HOORAY FOR THE CITY OF AMES

Shots fired by the city of Ames, we guess. TAP WATER!

Share All sharing options for: HOORAY FOR THE CITY OF AMES

Oh man, the people who brought you those hilarious fake Cleveland tourist videos are back with a magnum opus, one devoted to Ames, Iowa, home of Iowa State University and its hapless Cyclone football team. And oh boy what a doozy of a fake spoof video, where... hang on... um...

Okay, I'm sorry. We've been informed that this is a real video. That someone did on purpose. And they did it because they like Ames.

Hang on, I need to take a deep breath and sit down. Hoooooo boy.

Okay. Let's watch this together, and we'll post our reactions below.

0:09: This is already a failure on nearly every conceivable level. The state of Iowa does not float by itself in space. It is part of the Earth like every other state. AND. AND. EVEN IF we accept this ridiculous premise, you wouldn't see blue sky and clouds behind it unless you were looking up from Earth at the Space State of Iowa. And you know what? If that were the case, the Space State of Iowa would be upside down and everything would be falling off the face of the Space State of Iowa toward Earth with its much more potent gravity. So I really can't even with this already. WHY DID YOU DO THIS TO IOWA?

0:12: Oh no, they're singing. I'm so sorry. Go back to the floating in space. "In space, nobody can hear you miss every single note."

0:34: A botched green screen makes these people look like they're rapidly growing in size in front of the school. Also... you couldn't just take them to the school itself and have them stand out in front? It's right there. It's Ames, everything's in walking distance.

0:45: "It's ISU, home of Hilton Magic, drivin' with the top down next to College Creek!" So we're just not going to bother with segues then?

0:46: Let the record show that if there were a tack hammer within arm's reach it'd be embedded in our skulls by now.

0:47: HOW IS THERE STILL TWO AND A HALF MINUTES LEFT JESUS I'M SO SCARED

0:52: Oh no they're taking their clothes off. I did NOT sign up for Ames nudity. AMES: YOU CAN TAKE OFF YOUR JACKET IN JULY, NO BIG WHOOP!

0:57: "Affordable living, why go to L.A.?" Okay, they've clearly hired Bored High School Student to write this song. "There are many factors to consider in where do you live. Los Angeles California and Ames Iowa have many compares and contrasts. This is the question of our times." 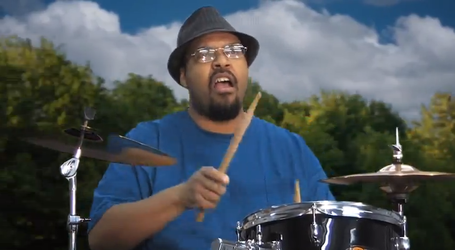 1:34: I am physically in pain right now and we're only halfway through. Do you people appreciate our suffering? Do you people even care?

1:48: "The water's so great that it won awards!" People, the city of Ames is boasting about its tap water. We are not making this up.

1:50: "Many cultures live together without any wars." AMES: WE HAVE SAID NO TO ETHNIC GENOCIDE THUS FAR!

2:05: "Met and fell in LOVE in Ames!" AMES: WE HAVE ANECDOTAL EVIDENCE THAT NOT EVERYBODY DIES ALONE HERE!

2:12: I know songs typically have a certain structure and all, but hitting the refrain is completely unnecessary. Don't do this to us.

2:29: Clearly, Fedora Man and his Magic Guitar are the real stars of this video.

2:40: Fedora Man wanks his way through a guitar solo that's at once interminable and only 11 seconds long, and they didn't even take the opportunity to show us anything about Ames during said solo? Objection, your honor, relevance?

2:56: This is the rockin'-est dancing the city of Ames has ever seen.

3:04: Also, let's not forget—let's NOT forget, Dude—that keeping a drum set, a drummer, for, uh, rhythm, you know, backseat of a Jeep... that ain't legal either.

Why did I do that. Why is that video. Why is anything. Why.