Iowa's head coach lost a bet he made with Iowa State coach Paul Rhoads that his school would raise more money for charity, and agreed to get a small tattoo as a result. 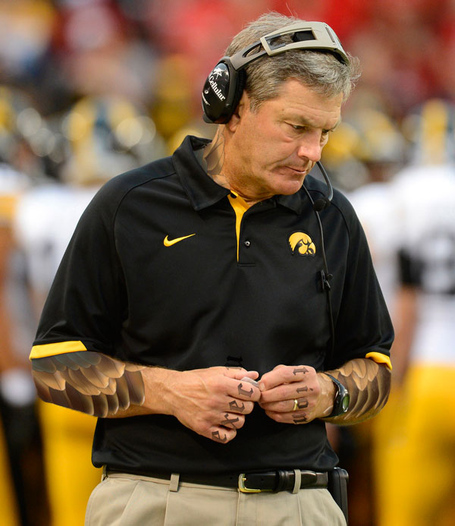 IOWA CITY, IA (AP) -- Kirk Ferentz's commitment to charity causes is well known, but from now on that commitment will be literally etched into his skin. The Iowa head coach recently went under the tattoo artist's needle and received his first tattoos as the result of a friendly wager he made with rival head coach Paul Rhoads.

"I bet Paul that our charity, The Find Homes for Old Buicks Initiative, would raise more money than their charity, Bus Tickets Out of Ames, and it turned out that we came up just short. So, per the terms of our wager, I agreed to get a little ink, as the kids say."

The tattoos, which cover the length of both of the coach's arms and nine of his ten knuckles, feature hawks' wings and the words "execution." The coach spent eight hours all told in the tattoo chair and paid $950 for the original design, but is pleased with the results.

"It was a little painful, but, hey, it's for a good cause, and I think the players will like it."

Ferentz indicated that he was inspired by a shirt he saw on a recruiting trip to Oshkosh, Wisconsin. "There was this great shirt of a hawk soaring majestically over a moonlit lake, and I thought: if I have to get this dang tattoo, that's what I want it to look like. Just that sensation of freedom, grace, and aerial attack – it just screams 'Kirk Ferentz'."

"Plus, you know, I'm the coach of the Hawks, so a hawk tattoo is right up my alley."

Ferentz is believed to be the first major conference football coach with full-length sleeve tattoos (although Arkansas coach Bret Bielema does sport an ankle tattoo). The Big Ten conference does not currently have any rules against their coaches acquiring tattoos, although conference commissioner Jim Delany remarked after seeing Ferentz's tattoos that he may consider new rules this summer. "I'm frankly a little surprised Kirk got those particular tattoos," said Delany. "I don't consider myself closed-minded, but I would just remind him that tattoos are forever. He may wake up one of these days and think, 'Maybe I should have gone with something smaller.' I know I did after I got that one of the Big Ten logo with the eleven hidden in it."

Rhoads expressed his appreciation for his rival's new tattoos. "I am so proud of Kirk for following through on his end of the wager. And I am so so proud of the Iowa State Community for raising so much money for BTOA. Sixty people are going to get out this summer because of your efforts, and will live full, productive lives." Rhoads then choked up and had to step away from the microphone.

Ferentz, for his part, is feeling no regret about his new body art, and is considering getting additional work done. "The first one is the hardest, I'd say. Once your family and friends have gotten used to the idea of you having tattoos, suddenly it's like your whole body is a canvas. Plus, I have to admit, the tattoo is... it's talking to me now. It's fully in charge." Possible future tattoos Ferentz has considered are a tribute to Norm Parker, Floyd of Rosedale, or Herky the Hawk "but with, like, a sword, or something.