Zach McCabe throws a punch and then blows a kiss in a downtown Iowa City bar Thursday night.

According to Iowa City Police, at around 12:10 a.m. Friday, McCabe allegedly punched a man in the face, causing a cut and swelling. The police officer obtained security video that showed McCabe and a female arguing. The alleged victim tried to separate McCabe from the female before McCabe punched him. After the man fell the ground, McCabe then blew him a kiss and walked out of the door.

Following the incident in the downtown Iowa City bar, a few tweets popped up.

If you recall, back in February during the Iowa basketball season, Fran McCaffery shut down Twitter for his players after a McCabe tweet following a loss to Wisconsin. Iowa fans took to Twitter to send McCabe some awful messages. In frustration, McCabe responded:

One such tweet, sent February 22nd during the final minutes of the loss to Wisconsin, is this one:

The same individual mentioned McCabe again in a tweet in March but did not send it directly to him.

Why is this important? Kase Heuermann, the individual that sent the tweets above, sent McCabe the tweet below on Friday morning at 12:02 AM.

According to Scott Dochterman's Gazette piece, the police report stated that McCabe punched an individual around 12:10 AM Friday morning, and it appears Heuermann might be the individual who was punched. He responded to questions sent directly to his public Twitter account. He was asked if he'd "be an internet hardo anymore." To which he replied: 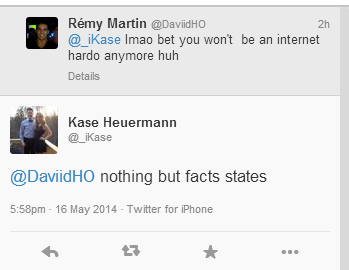 He was also asked directly "were you there?" He replied with, "he hit me haha." 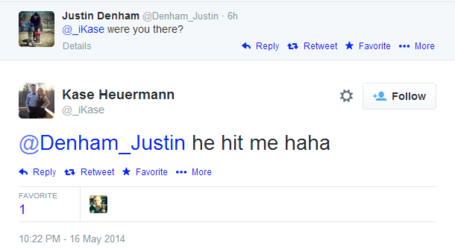 There's also a tweet sent by McCabe, who has since deleted his tweets and his Twitter account. Following the fight Friday morning, McCabe sent a tweet to @mspiers22 (the tweet above about McCabe fighting someone because "they said something about you on Twitter") and @paige_gee, the girlfriend of Heuermann (according to Facebook). McCabe's response to Spiers and Gee says "[he] had it coming" and includes the screencaps of the tweets posted above by Heuermann. Both from February 22nd and March 6th. 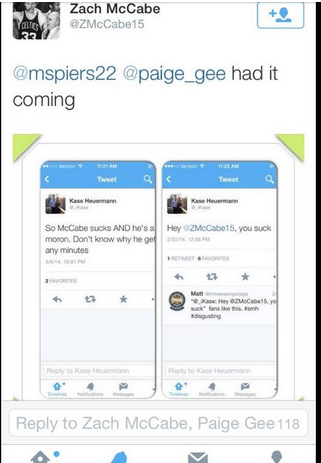 It's fairly clear that the ongoing social media beef between McCabe and this guy was a catalyst in this fight.  At the very least, it looks like it played a role.

The police report states McCabe was in an argument with a female and the victim tried to separate them.  It could be girl problems, but it would seem unlikely that the same person that sent derogatory tweets directly to McCabe eight minutes before the incident just happened to be there and felt that he needed to intervene upon seeing an argument between McCabe and a female.

Obviously, we don't know much yet.  More on this story as it develops.