HOW WILL IOWA FOOTBALL USE THE RAIDER PACKAGE IN 2014?

We saw the Iowa defense utilize a new package last season to defend passing downs. With personal changes, how will Iowa adapt their new package this fall?

Share All sharing options for: HOW WILL IOWA FOOTBALL USE THE RAIDER PACKAGE IN 2014?

2013. Iowa introduced a new defensive scheme against Northwestern. We learned after the game Iowa called it the Raider package. (We looked back at it using Vine). Phil Parker and staff stuck with the scheme and used it throughout the end of the season, including the bowl game versus LSU.

This past week, we learned that the package is here to stay. Phil Parker told reporters in his spring press conference that they'll continue to use the package going forward and we may see some tweaks. Of course, Iowa loses all three linebackers from the 2013 team. 2014 opponents will also have this package on film to study this summer along with Iowa's blitz packages and blitz tendencies.

The question was asked of Parker:

Q. The Raider package seems like it is something that is here to stay.

Phil Parker: I think it's unique in the way we came about it. We were at Ohio State; we had trouble getting off the field on third down because we had the guys covered up, but we didn't have anybody to catch the quarterback, and he's a great athlete and a great player. But we came out and Northwestern had a great athlete at quarterback that can move and so we designed a package that we were going to put more linebackers and guys would go chase and catch guys. So with that, that's been very successful for us and we just keep on adding to that package. And really alls you're doing is taking out one or two defensive linemen and putting in some linebackers that can rush and get to the quarterback and you can play zone out of it and you can play man and you can do everything you can in your base stuff, and it just gives you better athletes on the field.

And he discussed it further:

Q. Does that bump out nickel? Last year you played a low percentage of nickel.

Phil Parker: Well, everything changes with personnel, you know what I mean, and we thought that if you put nickel in the game and then you've got to take Kirksey out or you have to take Hitchens out and we didn't want to do that. That's why we created that situation and kind of limited nickel. This year it might be a little bit more nickel or maybe even nickel/Raider type of deal, so it might put a defensive back in there instead of a linebacker; so that we are still making those decisions. But right now, we are not that far along in our preparation. We still want to learn how to play first and second downs really well and see what we can do with our guys' base fundamental stuff first.

So, a nickel/Raider package? That makes sense. As Parker noted, Hitchens, Morris and Kirksey were three of Iowa's best athletes last season. This year, they have athletes at linebacker but nobody like Kirksey. Reggie Spearman is athletic but he lacks experience. Last season, he played rush end in the Raider package and maybe he'll move down to end and rush the quarterback again. He's young and while he's learning, at this stage he still might be better moving forward than in reverse.

A nickel/Raider is schematically similar is a 4-2-5 defense. The 4-2-5 includes a weak and strong safety with a free safety. A nickel is three corners. We learned, from his Facebook, that second string safety Nico Law worked a little bit with the linebackers. We've also heard Phil Parker praise corner back Greg Mabin. He's a defensive back with near safety size at 6'2" and 200 pounds. Both Law and Mabin could see time in Iowa's Raider/nickel scheme.

We can look at TCU's famous 4-2-5 defense to get an idea of blitz packages. (TCU runs a 4-2-5 as a base defense). Let's visit Brophy Football where he breaks down TCU's blitz schemes. Remember, for Iowa, this scheme will likely utilized on pass downs only (3rd and 5+). Brophy shows how TCU uses two safeties in their blitz package. They're named "Smokes." 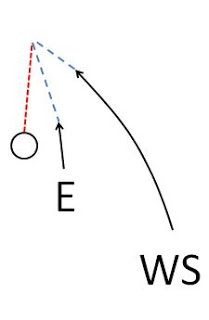 The safety doesn't always have to have an outside rush. As Brophy explains in this next example,

Additionally, on a SMOKE call, a safety can make a "LION" call to alert the end that he is going inside the rush lane, so that the DE should continue on a wide rush.

Here's where the linebacker-type can really be beneficial. They'll have the speed to really get up-field using an outside rush leaving a larger hole for the safety. 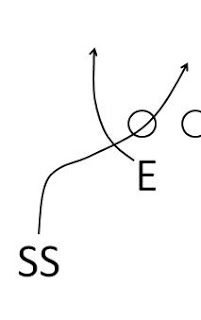 The safeties (we're calling Sean Draper a safety too), bring speed to the field. They give Iowa help with the rush but they also give Iowa speed to play contain if a mobile quarterback decides to take off with the ball.

Iowa got pressure with its linebackers last year. They still can with linebacker and safety combo blitzes. Here are two examples: 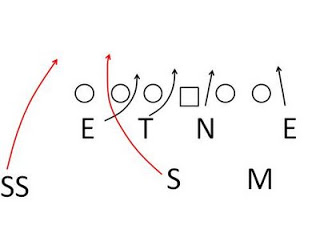 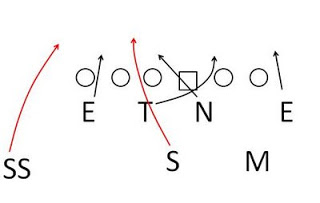 Remember, Iowa had their defensive tackles and ends stand up to confuse the offensive linemen and quarterback. Linebackers approached the line and both the linemen and linebackers moved around as much as possible pre-snap to disguise their intentions.

THERE'S A LOT OF FLEXIBILITY HERE. Iowa can still play multiple zone coverages in the backfield and or match-up man with four defensive backs and a free safety on the field. If they use any of the linebackers at end or Nate Meier they  have quick feet that can play in a zone blitz and cover a curl zone (quick slant/curl) and even get to the flat (out).

As Parker noted, they'd have the athletes to chase down a quarterback. Iowa's problem with mobile quarterbacks isn't a problem completely solved. But, these concepts and the fact that they've hitting the drawing board to better utilize their athletic ability on the roster and that will make them a better team in 2014.

Finally, here's a pdf download if you'd like to read more about the 4-2-5 concept and pressure defense.