Even in one year of limited playing time, it's not hard to see that Peter Jok looks like a special player. With the graduation of Devyn Marble, his heir apparent is already here and he's got three more years of eligibility. Get excited, everybody.

If I had to choose one word to describe Peter Jok's freshman year, it would probably be: confident. As a true freshman on a roster full of talented upperclassmen, Jok predictably saw little playing time this year in games that mattered. But when he did see the court, the youngster was not afraid to shoot the ball. With the departure of Devyn Marble, Peter Jok looks primed to step into that scorer role over the next three years. Their offensive styles aren't quite compatible, as Jok loves shooting the three ball and is already a more accomplished outside shooter than Marble was as a true freshman. However, Jok like Marble, was a high usage offensive player who took a lot of shots when he was in the game. The results this season were decent for a freshman, but Jok should get better as his offensive game grows and he learns to be more than just a spot up shooter. When it's all said and done, we are looking at a guy who is probably going to put up double-digits points on an almost nightly basis. He's going to be a fun one to watch for the next couple of years.

Jok didn't really play much during the Big Ten portion of the schedule. At home against Illinois was the only conference game where he played more than 10 minutes (he played 11), and other than that, he never saw more than 7 minutes of playing time against a Big Ten foe. Outside of the Illini, Tennessee was the most difficult team Iowa played against that Jok received meaningful minutes (16). So, of course, we are not only working with a small sample size, but we are also dealing with somewhat inflated numbers, considering the bulk of his resume came against less than stellar opponents. But even keeping those in mind, there are some very positive takeaways from Jok's numbers.

First, let's look at his scoring ability as a true freshman. 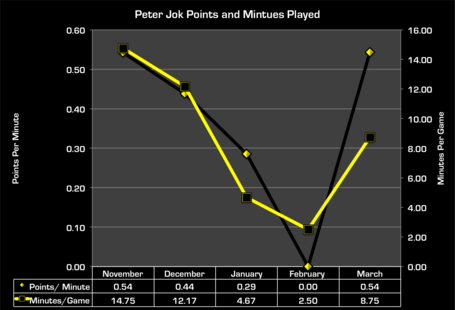 Predictably we saw his scoring go down as the competition got tougher this year. There are two good things in this chart, however. First, was the fact that Jok was able to come right out of high school and put up 0.54 and 0.44 points per minute in his first two months of college basketball. Sure, Iowa was playing some cupcakes during that stretch, but college is much different game than high school, and it takes talent to come in and score like that right away playing as many minutes per game as he was in November and December. Second, the decline isn't a negative at all, because we all knew Jok wasn't ready for Big Ten caliber players. His trigger finger was often too itchy, and he had a tendency to force up some bad shots. That tendency, and the return of Josh Oglesby ate into Jok's minutes in January and February. But in March, Fran saw improvement from Peter in practice and Iowa's offense was in need of a boost down the stretch. With the defense being little more than five turnstiles on the court at a time, McCaffery called on the freshman to play more minutes. Results were mixed, but Jok did put together a very nice offensive game against Tennessee scoring 12 points in 16 minutes on 4-5 shooting (2-3 from three point range), and giving us a possible glimpse of things to come over the next few seasons. His defense was clearly still in need of some work, but the offense was there and it looked good.

But let's talk about Peter's confidence. As I alluded to previously, Jok seems to have a no fear mentality on offense. He is not afraid to put up a shot at any time. He may have only averaged 9.44 minutes per game this season, but during his time on the court, only Roy Devyn Marble had a higher usage rate and shot rate. Usage rate is essentially an estimate of how many possessions ended by a player making a shot, missing a shot that isn't rebounded by the offense, or turning the ball over while the player is on the court. Shot rate is just an estimate what percentage of a team's shots the player takes while they are in the game. According to Kenpom, Marble used 27.3% of Iowa's possessions when he was in the game and took 29.6% of the Hawkeyes' shots. That was easily the highest volume on the team this past season. Jok, though, used 21.7% of Iowa's possessions and took 25.1% of their shots. His usage rate was second highest on the team, but was only about 1.5% higher than Aaron White or Zach McCabe. Jok's 25.1% shot rate, though, was about 3% higher than the third place Zach McCabe and about 5% higher than fourth place Mike Gesell. In other words, the stats back up what our eyes saw; Peter Jok likes to shoot the ball. That's good in the sense that he does seem to be a good shooter, but it has a downside when he forces up bad shots that kill a possession. That will be a work in progress.

As for the rest, his penchant for shooting made it so assists weren't a big part of his game, but the nice thing was that turnovers weren't a huge part of his game either. Losing the ball on only 13.4% of your team's possessions while you are on the floor is very good for a freshman. Overall, he finished the season with 0.9 total win shares (0.6 on offense and 0.3 on defense) in limited playing time. That's good. If we look at win shares per 40 minutes, Jok was sixth on the team averaging 0.144 wins added per 40 minutes on the court. And even with few Big Ten minutes, Jok was eighth on the team with 0.130 wins added per 40 minutes in conference play. It was a limited sample size this year, but the future looks bright for him. 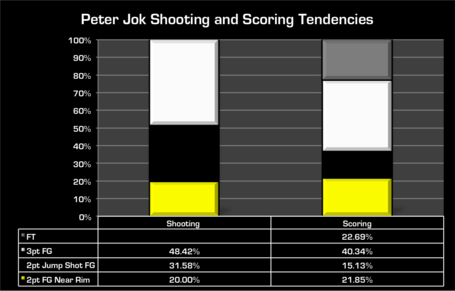 Except for the high volume of shots put up on offense, the comparison to Devyn Marble doesn't really work. Marble's long range game developed as his career went on, but Jok came right into college firing from deep. As a result, that was where most of his offensive contribution came from. 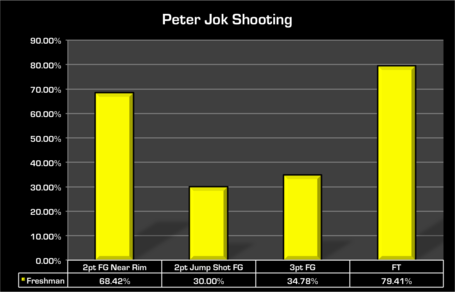 Also, Jok is pretty clearly a better shooter and more efficient scorer than Marble was. His 48.42% eFG% was better than any eFG% that Marble put up in his entire career (Marble's 47.94% in his senior year was his best). That's not a knock on Marble, it's just that Jok's got the talent to consistently put up an eFG% better than 50% every season. And for a guy who puts up as many shots as he does, it's a real positive to be that efficient.

First and foremost, Jok is next line for a big increase in playing time next season. How big that increase is, most likely depends on how quickly his development comes along. Since Fran has rebuilt this program, the Hawkeyes don't need Peter Jok to play 30 minutes per game as a sophomore the way they needed Devyn Marble to do. If he proves to be a quick learner, he could find himself in that Devyn Marble role, but more likely I see him getting about 20 minutes per game or so (again, off the top of my head, without breaking down the minutes yet). The big improvement that needs to be made next year is on the defensive side of the ball. Being only a freshman and possessing extreme length and athleticism, it's pretty realistic to think that he can become a very good defender by the time he leaves campus. Will it happen next year? Probably not, but hopefully he won't be a liability after one year of experience under his belt. And on offense, I think Jok needs to show that he is more than just a spot up shooter. He showed the occasional ability to take the ball to the rim and score, but that was clearly not what he was most comfortable with as a freshman. He seems to have a nice shot from outside, so 48% of his shots coming from there isn't a bad thing. If he can turn some of those long twos (even though he looks like a pretty good jump shooter) into short twos, that eFG% will go up over 50% and he should even find himself getting to the free throw line more often.

But like I said before, Iowa doesn't need Jok to turn into Devyn Marble overnight. It wouldn't hurt, of course, but next year's team has a lot of talent returning and a lot of that talent is in the backcourt. That means, Jok could start or he could come off the bench. There are so many lineup possibilities next season, I'm not really sure who the starting five will be next November. Jok has the potential to crack the starting lineup if he can show defensive improvement from his freshman year to his sophomore year. Otherwise, he will be a very nice piece off the bench on what should be another very good Iowa team next year.

Next Up: The Entire Team in Review