Year two on campus was another good one for Adam Woodbury. He hasn't reached his full potential yet, but with another year in the books, the Iowa big man looks to be right on schedule.

Share All sharing options for: 2013-2014 SEASON IN REVIEW: ADAM WOODBURY

With the graduation of Zach McCabe, Iowa is in need of a new enforcer. Someone to get in people's faces, to dive on the floor for loose balls and tangle up with opponents for jump balls and, of course, someone to replace that evil grin that McCabe patented over his four year career in Iowa City. Luckily, the Hawkeyes have another hard-nosed, slightly cocky player from Sioux City on the roster in Adam Woodbury. Woody, as he's often referred to because it's one less syllable, fits the profile to replace McCabe perfectly. His game is more predicated on power than finesse, he's averaged a very McCabeian 6 fouls called on him per 40 minutes during his career, and most importantly he's not afraid to address his haters:

(Courtesy of PSD, yet again.)

Coming out of high school, centers often take a little more time to develop offensively than players at other positions. Many times they go from being the biggest and strongest man on the court in high school to being just another tree in a forest of big men; and often the skinniest and weakest tree in the forest at that. Similar to his former AAU teammate, Mike Gesell, Woodbury came in and started at the five spot right away for McCaffery's squad last season. Also like Gesell last year, Woody was fine out of the gate, but had some trouble offensively when it came time to face Big Ten competition. This year, though, there was no sophomore slump for #34, as he continued to show improvement even when the big boy portion of the schedule rolled around. It wasn't a breakout year for Woodbury by any means, but it was another solid step forward. And considering that he has two more years left in the program, his development seems to be right on schedule.

Adam Woodbury was fairly consistent on offense all year long. 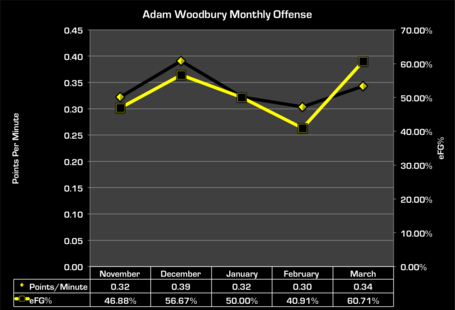 December was his best month and February was his worst month, but his scoring was consistently within the 0.30-0.39 range all year. And unlike most everybody else on the team, he didn't fall off a cliff in March. So that's something.

Honestly, though, Woodbury's non-conference performance was pretty similar to last year. Instead, it was the conference slate where he showed the most improvement on the offensive side of the ball this year. 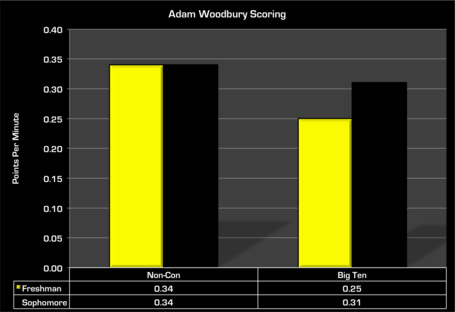 Even with February being unkind to the big fella, he was still more productive on offense during conference play than during his freshman season. Even his win shares in conference play display his offensive improvement. 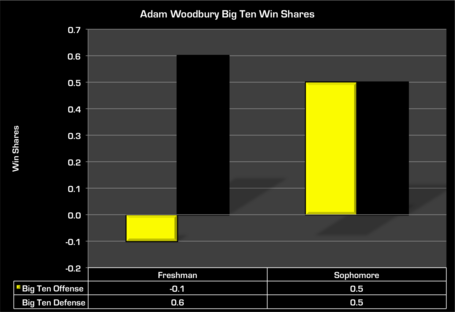 His offensive game in his first season against Big Ten competition left a lot to be desired. However, his in-conference offensive win shares went from -0.1 during his freshman season to 0.5 during his sophomore season. Overall, he was estimated to be worth 1 win in conference play for the Hawkeyes this season compared to just 0.5 wins last year. And he did all that by only increasing his minutes by about 1 per game against conference foes, which means he went from being worth 6.7% of a win every 40 minutes for Iowa in Big Ten play in his freshman year to being worth 13.3% of a win every 40 minutes.

Splicing things down even further, Woodbury's offense seemed to flourish at Carver-Hawkeye Arena against Big Ten opponents more than it did on the road. Check out the table:

Woody shot, scored, and grabbed offensive rebounds better at home in conference play this season. I'm not saying it necessarily means anything. I just found it interesting while going through my spreadsheet.

Anyway, Woodbury's game is not just about shooting and scoring the basketball. Really, Iowa doesn't depend on him much for offense at all. But because he stands seven feet tall, the Hawkeyes do rely on his ability to rebound and guard the basket. And just like his freshman year, Woodbury did not let them down. According to Kenpom, Woodbury grabbing 11.44% of all available offensive rebounds while he was on the court was good for 149th in the country this season, while his 3.72% blocked shot rate was 338th best in the nation. His blocked shot rate was down 1 percentage point from last season, but oddly enough, that's because he only blocked 4 shots in all of non-conference play. Rather, Woodbury had 15 of his 19 blocks in conference play this year, which was actually good for a 5.35% blocked shot rate. That's odd, but definitely encouraging.

What's more odd and less encouraging, on the other hand, was his defensive rebounding this season. Woodbury went from a Kenpom ranked defensive rebounding rate that was 227th in the nation last year at 19.65% to an unranked 13.93% as a sophomore. Now, I'm not really sure what happened here. This past Iowa team was a better defensive rebounding team than the 2012-2013 version, so maybe other guys just sucked up more opponent misses (Melsahn Basabe and Aaron White did post career highs in defensive rebounding rate this year, while Jarrod Uthoff proved to be a great defensive rebounder himself). Additionally, Iowa's opponents took 4% more of their shot attempts from behind the three point line compared to last year, so maybe there were more long rebounds to be had and Woodbury couldn't get to them as easily as his teammates. I don't really know. Similar to Mike Gesell's free throw issues this year, I'm hoping it's just a one year thing and Woody gets back to crashing the defensive boards next season.

Overall, though, Woodbury had himself a fine year. His offensive game took steps forward against the tougher competition like it needed to, and his rebounding and blocked shots were roughly the same as his solid freshman campaign. I mean, career highs in shooting, points per minute, offensive rating, and offensive win shares against the toughest league in all of college basketball this season is nothing to sneeze at. Iowa may not run their offense through Woodbury, but his 16 points on 8-11 shooting against Tennessee in the final game of the season showed what he could be capable of over the next two seasons. 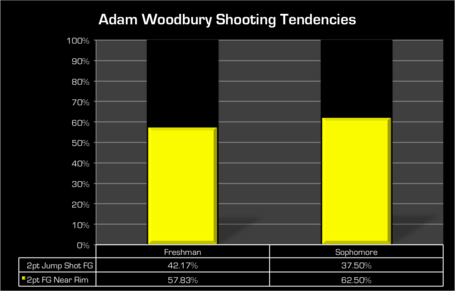 Going along with Woody's offensive development, this chart shows that he was playing closer to the basket this past season. Now, the "2pt Jump Shot FG" doesn't necessarily mean mid-range jumpers here (although, Woodbury did seem to add the elbow jumper to his arsenal this season). Instead, Woodbury is most likely always going to have a lower percentage of shots near the rim compared to someone like Gabe Olaseni because Woodbury has always had that little turn around baby hook in his bag of tricks. Olaseni, meanwhile, is more of a clean up guy, who gets offensive rebounds and scores by dunking or just laying the ball in. Thus, because Woody's turnaround hook varies in distance from the rim more than Gabe's, he will most likely always have a lower near rim shot percentage. It's not good or bad, per say. It's just two different styles from two different players. 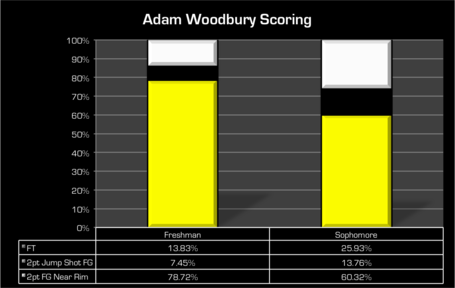 Another positive development that I didn't really touch on above, was the fact that Woodbury learned how to draw fouls this year. He averaged 0.51 free throw attempts per field goal attempt this year, which was up from 0.31 as a freshman. Even better, he upped that to 0.65 free throw attempts per field goal attempt against Big Ten teams this season compared to 0.44 against non-conference opponents. The increased rate at which he drew a foul basically made free throws a quarter of his entire offensive scoring this season. Needless to say, that's a pleasant development. 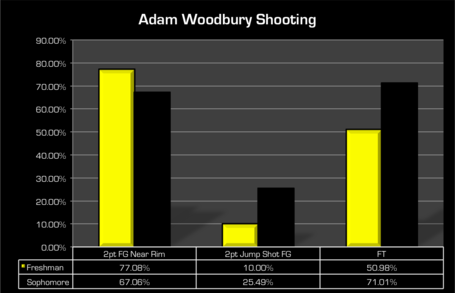 That increased free throw rate was an especially pleasant development because Woody hit 71% of his free ones this year. I'm not sure if that's sustainable for a guy as big as him moving forward, but that number is at least encouraging if nothing else. As for his shooting from the floor, Woodbury showed better touch on his baby hook this season and he also showed that he was capable of knocking down the elbow jumper. The shots near the rim, though, are interesting in that what really drug that percentage down this year was the fact that he couldn't make a shot near the rim to save his life against conference opponents on the road. Against Big Ten teams at home, Woodbury made 72.73% of his shots near the rim. Against Big Ten teams on the road, he made only 34.78%. This makes me think that his whole conference home and road offensive splits this season were just random noise. I just don't see how it's possible for him to shoot that badly on the road in his final two years, but I guess we shall see. Afterall, that's why they play the games. 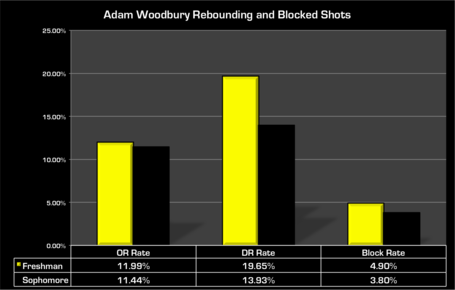 I've already covered this above, but here's a visual representation of his defensive rebounding drop off this season. Like I said, let's just hope that's also a statistical anomaly.

Even with the loss of Devyn Marble from this team, Iowa still returns plenty of offensive talent next season. Woodbury could be considered part of that, but he probably isn't going to be relied upon heavily for points. With another year of experience under his belt, I do see his points per minute going up to somewhere around the high 0.30s, but I don't think we see him eclipse the 0.40 threshold until his senior year. Not that he may not be capable of that next year, it's just that Iowa has so many scoring options that they don't need to rely on the big man for constant scoring production. So as long as the shooting stays about as efficient as this season and his points per minute are in the high 0.30s, I consider that a successful offensive year. A more complete season would also include continuing to be good at grabbing offensive boards and rebounding (sorry) from an odd season on the defensive glass this year, while continuing to block shots and defend the rim.

Also, last but not least, I should probably mention turnovers. For the second straight year, Woody coughed the ball up more than anybody on the team not named "Anthony Clemmons." Granted, he did see his turnover rate drop to 19% from 23.6%, which is good, but 19% is still high. So, a slight uptick in points per minute, pulling down rebounds and blocking shots similar to the way he did in his freshman year, and cutting down on the turnovers -- that's what we should expect to see out of him next season. Player development isn't always linear, but I think that's definitely doable for him.

Adam Woodbury's sophomore season was anything but a slump. His defensive rebounding wasn't what we know it can be, but other than that, his offense was better and his overall game was better against tougher competition. And that's kind of what I look for from a player in their second year on campus. In the first year, it's basically expected that the jump in talent level from the Fairleigh Dickinson's to the Michigan State's is going to be overwhelming to most freshman. It's the sophomore year where you want to see some improvement against the more difficult competition. Woodbury showed us just that, and he also did it with some attitude. And who doesn't like a little attitude when it's coming from your team? With the departure of Zach McCabe, the torch of the enforcer has been passed on to Adam Woodbury. While he may have some big shoes to fill, I think it's safe to say that torch seems to be in plenty capable hands.

Up Next: Anthony Clemmons