IT'S NOT PLAGIARISM IF YOU LINK TO IT: CHRIS WHITE AND BOBBY KENNEDY TALK IOWA FOOTBALL

There was another weekly press conference. We learn from Iowa's running back and wide receivers coaches about Iowa's young players.

Share All sharing options for: IT'S NOT PLAGIARISM IF YOU LINK TO IT: CHRIS WHITE AND BOBBY KENNEDY TALK IOWA FOOTBALL

ANOTHER WEEK OF SPRING FOOTBALL. ANOTHER PRESS CONFERENCE WITH IOWA ASSISTANTS. Marc Morehouse has video of both Chris White and Bobby Kennedy from yesterday. Here's also the transcript of both. I'll summarize below these videos.

SUMMARY. There's a lot of good stuff here (this also includes notes from Kirk Ferentz and Brandon Scherff who participated in the Big Ten teleconference).

And there's certainly more. That may be the most bullets from one press conference and those guys gave us a lot. Make sure to read the whole thing.

ALSO, GERRY DINARDO ATTENDED IOWA'S PRACTICE YESTERDAY. The Big Ten crew is making the rounds on their spring football tour. Iowa held another practice yesterday, here's some pics. Also, here's some of the things DiNardo had to say about Iowa's practice. (click to embiggen) 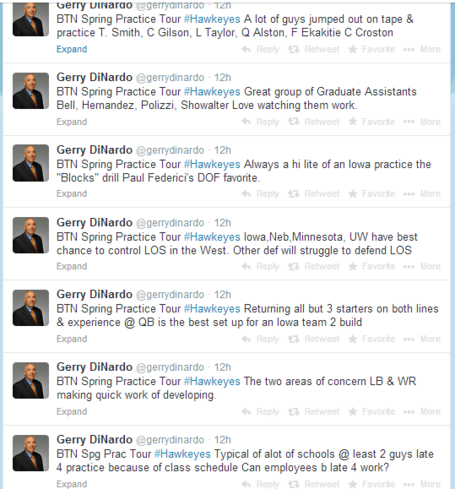 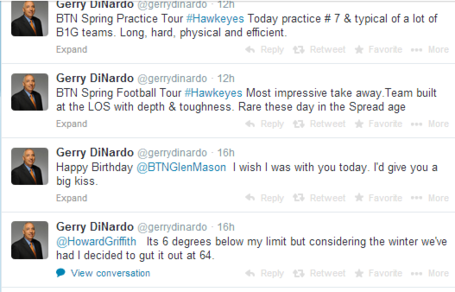 HAWK BASEBALL NOTCHES ANOTHER WINNER. The Hawks complete the sweep over Kansas. Here's the highlights: