Want to know what caused Iowa's slide into mediocrity? Here are eleven totally serious and realistic conspiracy theories that explain it.

Share All sharing options for: What happened? 11 Conspiracy Theories About Iowa's Decline

The excitement of Iowa's NCAA tournament bid has been leavened with a certain amount of unease on the part of most Iowa fans. The team's precipitous decline over the last month has been as steep as it has been mysterious, leaving many to ask the question: what happened to this team to transform them from the juggernaut that they were into the confused, lost team they became toward the end of the season? What follows is BHGP's reconstruction of the most likely possible theories, presented in order of probability from lowest to highest.

Evidence in favor of the theory: This photo of Dr. Gert Uthoft, psychology professor at the University of Mainz 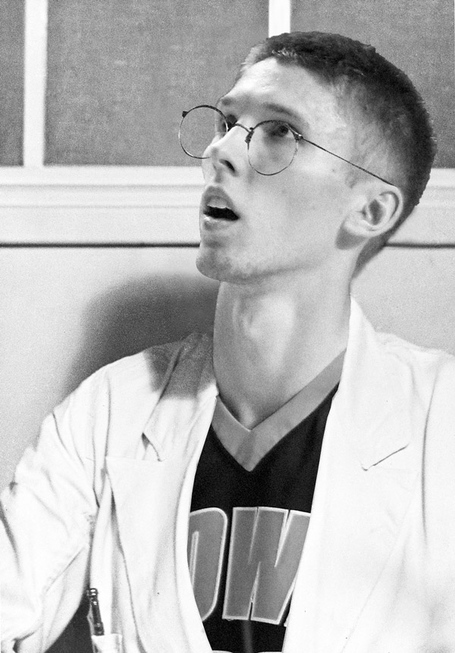 Some quick research into Dr. Uthoft's background reveal that he specializes in "large-scale experimental research that tests the boundaries of human endurance for suffering". Indeed, he is the chair of his the University of Mainz's interdisciplinary "Institute of Suffering", and has written several papers specifically on the topic of suffering and sports fandom. One of these papers, "A multimodal model of human despair in the Cleveland Browns fan base," includes the following sentences:

The assumption has been made by other researchers (Jenkins 1971, Christie 2003) that fan suffering will peak when the team's Baseline Aptitude for Deficiency and Non-Endurable Sadness Score, or BADNESS, reaches a low level and remains there for many years. A careful study of the data reveals, however, that the misery of Cleveland Browns fans did not reach its zenith in the 2000s as expected by the earlier theory, but rather in the late '80s, an event known in the literature as the Byner Cataclysm. We hypothesize that it is not BADNESS, per se, that produces maximal fan suffering, but rather a period of extreme non-BADNESS followed suddenly by a swift acceleration of BADNESS.

Further research reveals that Uthoft did a one-year sabbatical in 2012-13 at the University of Wisconsin in Madison, where he performed what he describes in his CV as "preliminary research into a large-scale experimental design in the upper midwest."

Evidence in favor of this theory: this team photo 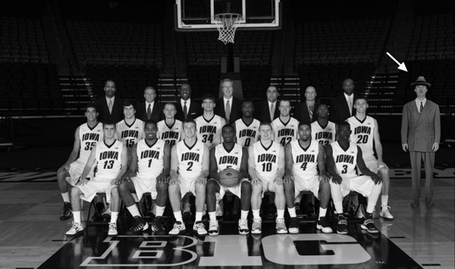 The presence of a 42 year-old team manager raised a few eyebrows at media day, but Chip Zhukov's credentials were impeccable. His resume stated that he was "the grandson of Red Auerbach and the nephew of Gregg Popovich", that he was "largely responsible for the design of Tom Thibodeau's defenses in Boston and Chicago" and that he "taught Tim Hardaway his killer crossover." In spite of his age and poor English, Zhukov was taken on as a manager and given sole responsibility for "inflation and maintenance of basketballs." When the team returned from their first trip to Bloomington this February, many players reported that the basketballs used in practice seemed to have a dull metallic sheen, but wrote it off as some kind of marketing promotion. Shortly after, the team began exhibiting extreme sluggishness and confusion in games. Coincidentally, Mr. Zhukov disappeared around the same time, saying he had to care for a "sick aunt" in Pennsylvania.

Evidence in favor of this theory: this photo of Adam Woodbury in ENG 313: Introduction to English Literature 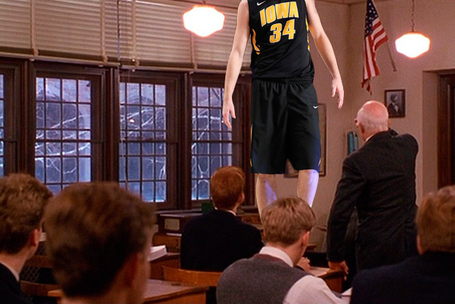 There are reports that the entire team was enrolled in ENG 313 because it was rumored to be an easy class, but shortly after the semester started, the class's original professor fell ill and was replaced by one Will Blakely, described as a "boyish-looking, impish young man who is entertaining in small doses but not so much over the long haul." Blakely is reported to have inspired a fervent love of literature in the team, encouraging them to rip up their textbooks, stand on their desks, and "question society." According to this theory, the players took the natural next step of forming a "Dead Poet’s Society" that met late at night by the banks of the Iowa River, where the players recited poetry and stayed up until all hours dancing, shouting, playing the saxophone, and generally not getting their rest. Exhausted from these literary shenanigans, the team's performance on game day would naturally suffer.

Evidence in favor: This text message from Mr. Horton to an unnamed player. 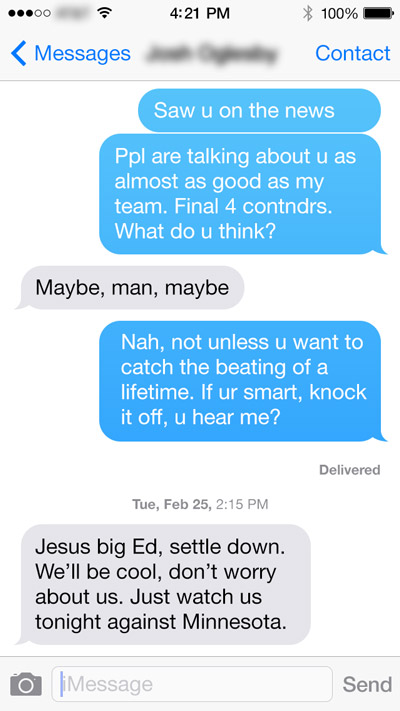 5) The coaching staff and team wanted to encourage Iowa fans to reflect philosophically on the role of sports in their lives.

Evidence in favor: This comment in an early press conference by Fran McCaffery:

MCCAFFERY: Obviously we're happy with the way we played, but the strangest thing is that the fans are really happy about it. I mean, it fundamentally doesn't make sense, right? They didn't play the game, most of them weren't even at the game, yet they act like they just won a triathlon or something. It's nice to receive the praise and all, but it's something that's never made sense to me. I mean, I get it that it goes both ways – if we start losing, the fans will act like they did something wrong, when it, again, had nothing to do with them – but I guess what I'm trying to say is that sports, at a psychological level, doesn't quite make sense to me. Maybe people would be better off taking up a hobby, something where they could really accomplish something at a personal level.

REPORTER: And, uh, the team really seemed to come out strong in the second half. Did you make any adjustments at halftime?

6) Aaron White walked under a ladder right before the Illinois game. That ladder was coated with polonium 210. 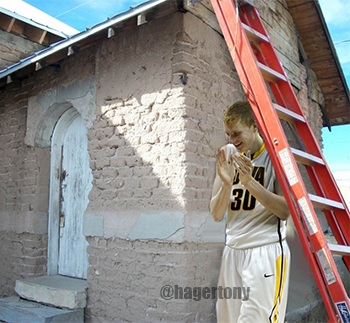 7) A mysterious black cat began appearing at their practices.

Evidence in favor of this theory: this photo 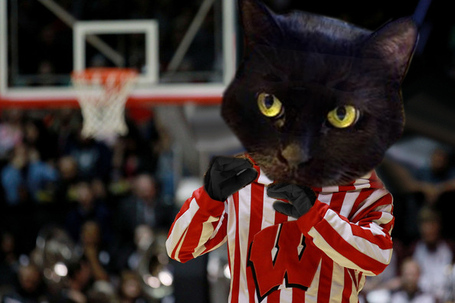 8) The team had a movie night before the second Wisconsin game where they watched the science fiction film Primer, and they are still trying to wrap their heads around it. 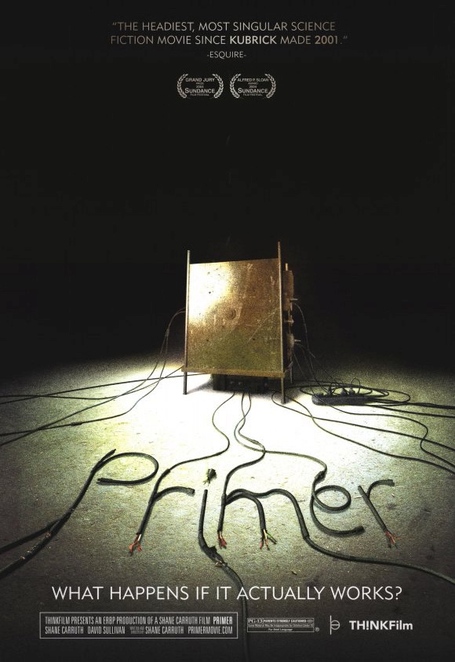 Evidence in favor of this theory: this is pure speculation, but if they did see that movie, it would have probably thrown them for quite a loop.

9) In the master settings for this season of NCAA Basketball, the "opponent skill" was accidentally bumped up to "Expert". Also, all existence is a Matrix-style computer simulation.

Evidence in favor of this theory: this one is really hard to test, but it would explain a lot. A lot.

10) Fran punched a mirror in extreme frustration after any one of the many close losses the team had. 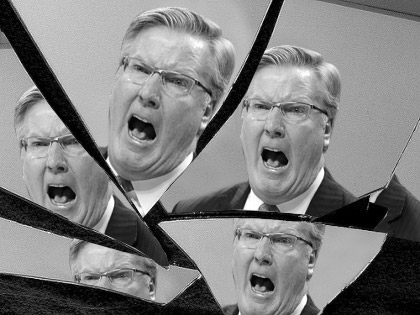 Also, his personality seems to indicate that he is the type to punch mirrors.

11) There is no ultimate explanation; it's just one damn thing after another.

Yeah, this is probably it.