The Hawkeyes host the Big Ten leaders Saturday, desperately needing a victory. Where there's a will, there's a way.

Here's something we haven't had to type in a few years: Iowa tries to break a home losing skid on ESPN Saturday afternoon against the Michigan Wolverines. Tipoff is set for 1:00 at CHA. 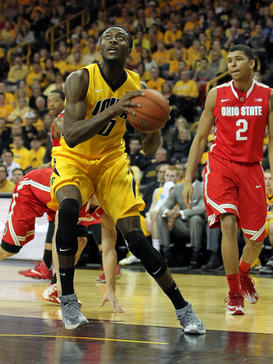 Take a deep dive into the metrics before Saturday's game.

Michigan beat Iowa by eight at the Crisler Center a few weeks ago by doing something that nobody else had done: Slowing Iowa's pace to a crawl and shut down Iowa's bench.  Iowa got just eight points from the bench, and the teams shared just 66 possessions over 40 minutes.  Michigan's starting five outshot Iowa's, and the slow pace neutralized Iowa's depth advantage by allowing Michigan to comfortably play all five starters over 32 minutes.  Iowa countered by trying to go small, but Josh Oglesby and Zach McCabe were unable to make a dent in Michigan's advantage.  That was the ballgame.

That was Iowa's second-slowest game of the season (only UTEP had been slower, and that was because Iowa built a big lead and tries to take the air out of the ball). Until that game, no BIg Ten team had played Iowa under 70 possessions.  But Big Ten coaches have clearly watched the Michigan tape: Since that game, Iowa has played four games.  Three of them have gone under 70 possessions.  Iowa blew out Northwestern on just 65 possessions, but Michigan State's overtime win against Iowa was on just 68 possessions (with 16 of those in overtime).  Ohio State, which had lost to Iowa on 74 possessions in Columbus on January 12, played Iowa to just 68 possessions Tuesday night.

The slow pace means Iowa can't score with its bread-and-butter attack: There are fewer transition buckets and fewer scores on the early dribble drive.  Iowa's natural response is to take perimeter shots, and the Hawkeyes are a pretty terrible perimeter shooting team when those shots come out of the halfcourt set. The results speak for themselves.

In those three losses, Iowa went a combined 8/42 from behind the arc.  That's 19 percent.  That's hideous.  And the idiotic decision to take 20 three-point attempts against Ohio State exemplified the issue.

Michigan is going to try to follow its template again Saturday, and they have only gotten better at it since that night in Ann Arbor.  The Wolverines can fill it up from anywhere: They are now fifth nationally in effective field goal rate, 11th in two-point shooting percentage and 22nd in three-point shooting percentage.  Nik Stauskas is unquestionably one of the nation's most effective offensive players, and Caris LeVert and Glenn Robinson present myriad matchup issues.  Michigan doesn't turn the ball over, they work for good shots, and they make them.  And they haven't played a 70-possession game since November.  Opponents are not allowed to generate quick points in transition or cheap ones at the free throw line, and Michigan is content to take its chances in a shooting contest.  They usually win that contest.

We thought Iowa had a great chance in Ann Arbor because nobody had slowed them down to date, and a fast-paced game would expose Michigan's depth issues.  Michigan flipped that script, but Iowa does still have the opportunity to push Michigan out of its low-tempo comfort zone at Carver Hawkeye.  Tempo will be key, and Iowa's going to have to do everything they can to push that tempo up, to force Michigan to run and dig into its bench, to generate cheap points in the lane and in transition.  If Iowa can do that, it can win this game.  But that's a big "if".

Iowa desperately needs a win Saturday.  The Hawkeyes are firmly in the top 25 and in the tournament field, but their resume is starting to look a little thin.  Losses to the Big Ten's top two teams (particularly the home loss to Michigan State) have hurt, and the home loss to Ohio State Tuesday counteracts the one serious win on the calendar to date.  Opportunities are dwindling: After Saturday, Iowa only has two games left against current top 25 teams (Wisconsin and @MSU), and road games against unranked teams in the Big Ten present plenty of downside potential.  Iowa needs a win against Michigan Saturday to stay within shouting distance in the conference race, yes.  But more importantly, Iowa needs a win Saturday to avoid the question that is starting to be asked: Who, exactly, have the Hawkeyes beaten to justify a top seed?