A Brief History of Metal Things at Iowa Sporting Events

Tuesday's incident at Assembly Hall was alarming, but it's hardly the first time an Iowa sporting event has been interrupted by a metal object.

Share All sharing options for: A Brief History of Metal Things at Iowa Sporting Events

Iowa's Tuesday basketball game at Indiana's Assembly Hall was postponed when a large piece of metal fell off the roof of the building, damaging a section of seats and prompting 30 million people to Tweet about what would have happened if people were in those seats.  The widely-circulated Vine video of the incident is particularly harrowing.

This is hardly the first time that an Iowa sporting event has been stopped due to something metal falling on the field of play.  In the 2011 Insight Bowl against Oklahoma, Iowa wide receivers Marvin McNutt and Kevonte Martin-Manley had to dive out of the way of an ESPN camera that fell to the field when a wire broke.  The camera fell innocently to the turf, but the wire nearly garrotted McNutt.  As the announcers said, "That's a first."

In the 2006 Outback Bowl against Florida, an Iowa second quarter offensive possession was delayed when the famous Tampa Bay Buccaneer Pirate Ship, which is usually moored above the north end zone, broke free from its dock and floated onto the field of play. 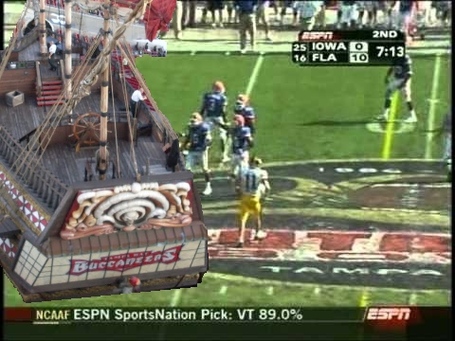 In 1952, at the height of the Korean War, first-year Iowa head coach Forest Evashevski fired up his team and showed some patriotic spirit by driving a Sherman Tank onto the Kinnick Stadium turf before the kickoff of the Hawkeyes' game with Illinois. 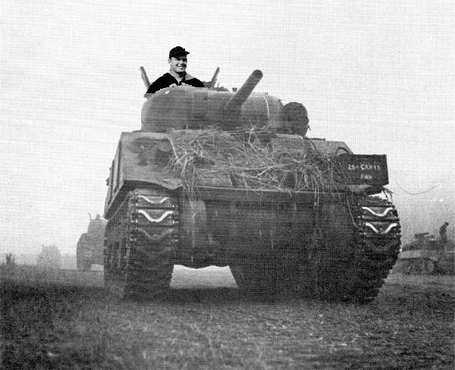 The stunt sent the team and crowd into a frenzy, so much so that Evashevski decided to incorporate the tank into the gameplan.  Here, the tank is used on kickoff coverage. 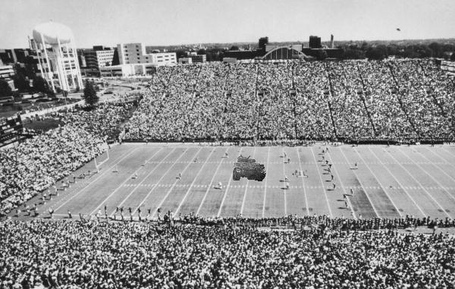 The referees permitted the tank under a one-time "instrument of war" exception, a rule that allowed for muskets in the early days of the game but was abolished from the rulebook the following season.

Of course, the weirdest metal item to ever fall onto the field of play during an Iowa game took place during the 2012 Iowa-Michigan State game, when hair metal band Poison fell from a luxury box above Kinnick Stadium onto the field. 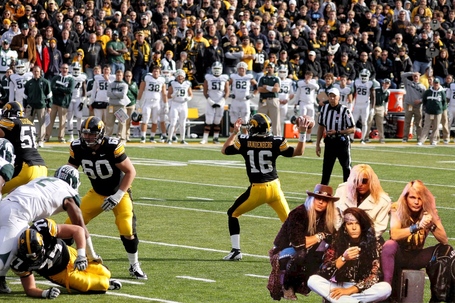 First-year offensive coordinator Greg Davis immediately incorporated the aging rockers into his gameplan.  Lead singer Bret Michaels got 17 carries for 41 yards, while guitarist C.C. DeVille led the Hawkeyes with two receptions.  They were later disciplined for talking about the experience on Twitter.