IT IS ONCE AGAIN TIME TO MANCOTT

Let's make one thing clear: BHGP does not issue MANCOTTs idly or without adequate provocation. Without delving too deeply into NO POLITICS territory, let's make it clear that we here at BHGP respect the greasy wheels of capitalism and your right to choose which business ventures you wish to patronage. So when we decide that a business enterprise must feel the righteous wrath of our MANCOTT, it's because they truly deserve it. We staged our first MANCOTT in 2007 when the Outback Bowl had the temerity to pick Wisconsin to play in their bowl game over Iowa. (Outback Bowl, how could you? I know there was that unpleasantness at the end of the 2006 Outback Bowl, but I thought we were besties!) We staged our second MANCOTT in 2009 when the Davey O'Brien Award failed to include Ricky Stanzi on their preseason watch list, on the grounds that they were a bunch of un-American chucklefucks.

So who has drawn the full righteous fury of our MANCOTT this year? No less than Buffalo Wild Wings, thanks to this incendiary new commercial that they've begun airing in the run-up to the NCAA Tournament:

WARNING: The following video and still footage may contain images of a very graphic and unsettling manner. Proceed at your own discretion.

What's the big deal, right? Just a couple bros bro-ing out at their local Buffalo Wild Wings establishment, eatin' a few wings, drinkin' a few beers, watchin' a few sporting events. And then one of them gets browbeat into participating in a hot wing challenge by a Vince Lombardi analogue but whatever that's not important and what's important is this little subliminal gut-punch from B-Dubs to Iowa fans everywhere: 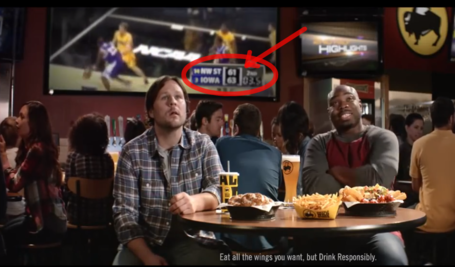 Iowa stands less than a month away from their first return trip to the NCAA Tournament in eight long, painful years... and B-Dubs has chosen now to run an ad that conspicuously features footage from the last time Iowa appeared in the NCAA Tournament, an appearance that ended with [MEMORIES REDACTED FOR SAKE OF SANITY]? It's not as if there haven't been other buzzer-beater finishes in the NCAA Tournament over the last seven years. (There have been!) It's not as if there haven't been other #3 seeds to lose in the first round. (There have been!)

But, sure, maybe it's just pure coincidence that B-Dubs has chosen to include footage from That Goddamn Game in this commercial. Maybe it's just a quirk of fate, a random bit of chance that unluckily features one of Iowa basketball's most depressing moments.

...or maybe not. Per Friend of the Pants Mike Hlas:

I like Buffalo Wild Wings' wraps, and the people who work at their Cedar Rapids locations are good folks who do good jobs. Please do not take out your wrath on them, Hawkeye fans. Instead, perhaps you should focus your displeasure toward the corporate headquarters in ... Minneapolis, Minnesota.

So Buffalo Wild Wings, the creators of this ad that rubs salt into a particularly painful wound for Iowa fans, just so happens to hail from the land of "WHO HATES IOWA?" Coincidence? I THINK NOT.

Look, we could overlook the overpriced booze. We could ignore the wings that were under-sized and overpriced. We could look past the weird texture that the wings had and the fact that they just didn't taste that great. We could accept the fact that the sauce menu really just offered the illusion of choice (WHAT THE HELL IS THE DIFFERENCE BETWEEN SWEET BBQ AND HONEY BBQ?!). All of that we could deal with. Sometimes you need some chicken wings and you just don't have a lot of options. But this is a step too far. This is one indignity too many.

(A tip of the hat to Hlas for bringing this to our attention.)