The Hawkeyes go east Saturday. Can they come home with a win?

After a week off, Iowa goes up against a dangerous Penn State squad Saturday afternoon. Tipoff is set for noon CT in State College.

As anyone who listened to the podcast can tell you, Penn State looks like a team on the verge of a breakthrough. The Nittany Lions lost their first six conference games of the year, including three losses (Minnesota, Indiana, @Purdue) where they were 75 percent or better to win in the final four minutes. The breakthrough came in a home win over Nebraska, then an overtime win over Ohio State at the nadir of the Buckeyes' January slide.  Penn State also beat Purdue at home and got a victory at Indiana Wednesday.  They haven't come within 12 points of Michigan or Michigan State in three tries, but those four wins and the close losses evidence that Penn State isn't that far away. 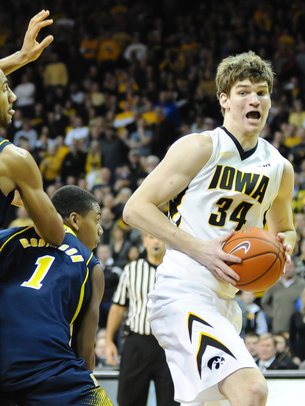 Even more stuff about Saturday's game.

Penn State's advanced metrics are a mess.  PSU is reasonably efficient on offense, but it's almost entirely due to their low turnover rate.  Just 15 percent of Penn State's offensive possessions end in a turnover, one of the lowest rates nationally.  PSU shoots at a 50 percent effective rate, and their three-point percentage (32.6) isn't going to worry anyone.  The Nittany Lions make free throws at a 75 percent rate, but are not particularly effective at getting to the line.

On defense, Penn State contests interior shots: Opponents shoot just 44 percent inside the arc, and 13 percent of opponent shots are blocked (that's right in line with Iowa's defense).  The biggest problem for Penn State Saturday could be what happens when they don't get a block: The Nittany Lions foul at an obscene rate.  They also don't generate turnovers, and their rebounding is thoroughly average.

Tim Frazier and D.J. Newbill are the key to everything Penn State does.  Both Frazier and Newbill average 35 minutes a game; in the last five games, the two of them have been on the court together for 37 minutes a game.  Newbill, a 6'4 guard/forward, leads the Nittany Lions in scoring (17.2 ppg), and is second in rebounding (5.3 rpg), assists (1.9 apg), and steals (0.8 spg).  Frazier, the PSU point guard, adds 16.1 points per contest -- Newbill and Frazier account for 45 percent of Penn State's points -- and a team-high 6.0 assists per game.  Freshman shooting guard Graham Woodard has established himself as a starter in league play, but has averaged just five points a game in eight games as a significant contributor.  Junior guard John Johnson didn't start playing until late December after transferring from Pitt.  Let's ask MGoBlog what they think of him.

You have no idea who this is, but PSU's Josh Johnson is the worst player in the Big Ten.

@mgoblog As someone who does, you mean John.

He plays like 10 minutes a game for PSU and I still know everything about him because he has never taken a good shot. 85 ORTG.

If I was Pat Chambers I'd keep John Johnson on the sideline in a Hannibal Lecter mask.

AND WHO NAMES THEIR KID JOHN JOHNSON ANYWAY

That pretty much sums up the John Johnson Experience.

The Nittany Lions don't have much for frontcourt height -- center Donovan Jack is just 6'9 -- but they make the most of what they have.  Jack is actually kind of a badass on defense, blocking 9.2 percent of opposing field goal attempts when he's on the floor.  Perimeter shooter Brandon Taylor (9.8 ppg, 4.6 rpg) and Ross Travis (9.3 ppg, team-high 6.9 rpg) play significant minutes on the frontline, as well.  If Pat Chambers is thinking of going toe to toe with Iowa's forwards, he could start all three with Newbill and Frazier in the backcourt, as he did against Illinois last week.  Seven-foot center Jordan Dickerson plays limited minutes, but blocks plenty of shots when he's out there.

Iowa's height and perimeter defense should be enough to get them across the finish line here: The Hawkeyes aren't as susceptible to the blocked shot as other PSU opponents, and Aaron White & Co. should be able to get to the free throw line at will (usual caveats about Big Ten officials apply).  Iowa's guards have shown an ability to force turnovers out of guards that are otherwise good at holding onto the ball, and Penn State's perimeter shooting isn't a significant threat.  But "should be" and "is" are two completely different things in a Big Ten road game, and the long trip and early start time could play a factor.  On paper, Iowa should have this, but it's far from a lock.