Wisconsin's modus operandi is fairly simple to diagnose.  On offense, the Badgers run extraordinarly long possessions, wearing down opponents by forcing them to play defense for the vast majority of the game.  They steadfastly protect the ball, preventing opponents from using turnovers to get easy points (Wisconsin has ranked in the national top 5 in turnover percentage in each of the last six seasons).  Bo Ryan's teams have never been great offensive rebounding teams -- in the 12 years of data available from Kenpom, just once have the Badgers ranked in the national top 100 in offensive rebounding -- mostly because they opt to drop back on defense and make opponents go through long possessions themselves.  Defensively, Wisconsin refuses to foul opponents but contest every shot and box out opponents especially well.  Turnovers mean additional fouls -- steals and reach-in calls go hand in hand -- and so they don't press the issue.

The results, of course, are an extraordinarily slow tempo at both ends.  The Badgers are 335th nationally in tempo at the moment; only Baylor, Virginia, Clemson, and Miami are playing at a slower tempo among major conference teams.  Only Miami is running slower offensive possessions.  Against standard opponents, Wisconsin's formula is simple and effective.  Opponents tire of the defensive grind, fall victim to Wisconsin's stout, no-easy-shots defense on the other end of the court, and settle into a plodding pace that plays to Wisconsin's strengths.  Changing gears so often takes its toll.

Iowa, though, is no standard opponent, and the Hawkeyes' peculiar mix of transition offense and methodical slow-down defense makes them a matchup nightmare for Wisconsin.  Iowa is second nationally in possession length, with only BYU taking shots faster than the Hawkeyes.  On the other hand, Iowa is one of the most deliberate defensive teams in the country; Iowa actually forces opponents into longer possessions than Wisconsin does, and rank 323rd nationally in defensive possession length.  The result is a quick-strike offense that is more than happy to let opponents take their time.  Iowa's transition game is not just unrelated to a fast defensive pace; it actually relies on opponents taking their time on offense.

Here is a list of the offensive and defensive possession lengths of teams that beat the Badgers in 2012-13:

Aside from Ole Miss, teams that beat Wisconsin in 2013 had one thing in common: They were perfectly happy to let opponents sit on the ball.  Not only did Wisconsin sitting on the ball for 30 seconds of each possession fail to shake their gameplan, it played right into it.  Ole Miss found success because, even though they weren't used to Wisconsin's long possessions, they did not let those possessions get in the way of their offensive tempo (the same can be said for Iowa).  There is no team in the country with a bigger differential between their offensive and defensive tempo than Iowa, and there is little doubt this is a good thing for playing Wisconsin.

A BRIEF HISTORY OF THE IOWA-WISCONSIN RIVALRY 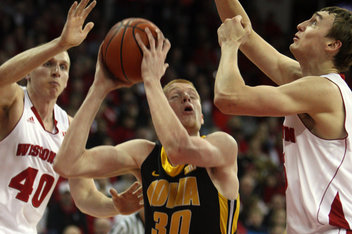 Of course, none of that matters if Wisconsin is just that good, and so far this season, the Badgers have been just that.  Wisconsin has played six teams -- St. John's, Florida, Green Bay, Virginia, Marquette, and Northwestern -- with defensive tempo ratings in the lowest quadrant.  Two of those teams were in the Kenpom Top 30 at the time; five were in the Top 100.  Wisconsin beat them all by an average of ten points (skewed slightly by a 27-point win over Northwestern).

And that might be the story for Wisconsin this year: They're doing what they always do, but they shoot the ball better than any Wisconsin team in a decade.  Wisconsin is still disproportionately dependent on the perimeter jumper, but the Badgers are shooting 39 percent from behind the arc, the highest rate from a Wisconsin team since 2004-05.  They are making more than 52 percent on two-point attempts, their highest percentage since Kenpom statistics began in 2002-03.  And where the 2012-13 Badgers were horrendous at the foul line, this team makes nearly 74 percent from the charity stripe.

You can't go too far into any Wisconsin preview without talking about sophomore Sam Dekker, who has become a division killer in his second season.  Dekker is averaging 14.5 points and 6.4 rebounds per game, and is shooting 37 percent from behind the arc.  The scary part: That's the lowest three-point shooting percentage of any Badger starter.  Seven-foot center Frank Kaminsky, who scored 43 on North Dakota, has slowed down slightly since going 6/6 from downtown against UND, but is still making three-pointers at a 42 percent rate.  Traevon Jackson, who made a crucial three-point basket to send last year's game in Madison to overtime, is scoring 10.6 points per game while dishing out 4.4 assists.  Josh Gasser, a 6'3 junior guard, adds 8.4 ppg and 4.1 rpg.  And of course there is Ben Brust, who leads the Badgers in minutes played, scores 12.4 points per game, and makes an average of three perimeter shots at a 43 percent rate.  Wisconsin can go eight-deep if needed, though their depth took a hit when sophomore guard and certified Hawkeye killer George Marshall decided to transfer in December.

Bo Ryan has yet to win a game against Fran McCaffery in regulation -- yes, that's the stat of the day -- because Iowa's system is particularly suited to messing with the Badgers.  Essentially, Wisconsin can do what it always does on offense but not get its regular results on defense, while Iowa can play Wisconsin's game relatively unfazed.  Against a typical Badger team, that usually means success.  This Badger team might be special, though.  We'll find out how special they are Sunday night.