The Big Ten Is Full of Blood and Spiders

Two more upsets on Wednesday night, and now even the bottom of the Big Ten is flexing its muscles. That's life in the nation's best college basketball conference four years running.

Share All sharing options for: The Big Ten Is Full of Blood and Spiders

If you missed Wednesday night's games in the Big Ten, you missed an utter bloodbath, with Ohio State dropping a home game to Penn State, then Wisconsin getting shot out of its own building by Northwestern down the stretch. That's two former Top 5 teams—like, a couple weeks ago, Top 5 in the damn nation—losing at home to the dregs of the conference.

In the aftermath of those losses, the landscape of the Big Ten looks like a train wreck, but some weird wreck where the front of the train is perfectly fine (maybe a meteor hit it? I don't know, I'm not a trainologist). Anyway, as Chris Hassel tweeted out: 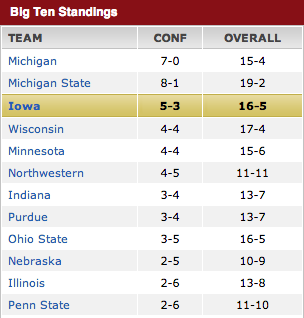 Of course, it never works out like that, especially when putative conference title contenders lose to last-place teams. The thought is never "hey, every single team in this conference is pretty decent," it's always "hey, that contender team was a FRAUD." And yeah, maybe, but it's worth noting that the Big Ten is not only strong at the top but unusually devoid of cupcakes, even by B1G standards.

So of course the middle of the Big Ten is racking up conference losses at a hilarious rate. It's like jumping into a woodchipper and then wondering where your legs went. Were Ohio State and Wisconsin's losses still bad? Well, yeah. For sure. The best teams shouldn't lose to the worst teams. But when the worst teams aren't that far off from the best teams, you shouldn't be pulling out your hair and screaming over this news. It happened, and it's going to keep happening.

All of this is to say, the standings are not going to get a lot prettier over the course of the year. KenPom thinks Wisconsin and Minnesota will work their way back over .500 in the conference, but only to 10-8, and only three teams (Michigan, MSU, Iowa, of course) will escape the B1G season with fewer than eight conference losses.

The Big Ten is full of blood and spiders. The spiders have lasers and chainsaws. You just kick your way through the best you can and hope you're on the right side of .500 by the end of it all. The odds of that are not stellar. So it goes in the best, most evil conference in basketball four years running.