Iowa gets a favorable stylistic matchup Wednesday, but is it enough to overcome the problems inherent in a Big Ten road trip?

Iowa faces its third serious road test of the season Wednesday night, with a visit to Ann Arbor against the Michigan Wolverines. Tip is set for 6:00 on BTN, shockingly. This could be one of the last times that Iowa is an underdog this season; according to Kenpom, the Hawkeyes are the favorites in all but two games left this year, here and at Michigan State.

Wednesday night's game matches two to the nation's most prolific offenses against each other. The Wolverines are fourth nationally in offensive efficiency so far this season (only Creighton, Duke, and Iowa are better), and that success is built on two simple principles: Don't turn the ball over and make shots. Michigan is sixth nationally in effective field goal percentage, and shoots 55 percent on two-point attempts and nearly 39 percent from behind the arc. The Wolverines also turn the ball over on just 14 percent of possessions, the seventh-lowest percentage nationally. They rely heavily on perimeter shooting; nearly 40 percent of their field goal attempts are from three. Michigan doesn't crash the offensive boards or draw fouls at a particularly high rate. The perimeter shooting, the lack of rebounding, and the lower-than-average concern with foul trouble all point toward Iowa playing a lot of man-to-man defense Wednesday.

Much like last season, Michigan's defense is just enough to get by. The Wolverines make up for their offensive rebounding deficiency by owning the defensive glass; just 27 percent of opposition misses go back to the Wolverines' opponent. More importantly, Michigan does not foul, as opponents have to take four shots for every free throw. Michigan uses tempo -- the Wolverines are even slower than Wisconsin this year -- and efficient shooting as their best defense: They limit the number of possessions, reduce the number of shot attempts by pounding the defensive glass, refuse to give away easy points at the stripe, and expect to make more shots than you. Usually, it works. 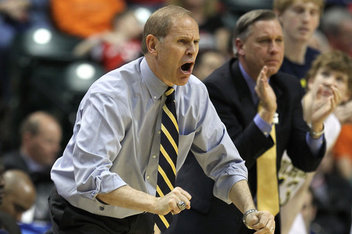 Where it hasn't worked this year is why Iowa should be optimistic Wednesday. The Wolverines have lost four times this season. Iowa State took them down at Hilton, Duke won in the Big Ten-ACC Challenge, Arizona beat them by two at Crisler, and Charlotte shocked them in Puerto Rico. Aside from the Charlotte game, which was just a horrible shooting performance in the third day of a three-day tournament, Michigan's other three losses came against high-tempo, high-efficiency offenses that were able to increase the number of possessions by keeping the tempo up throughout. The magic stat: Michigan is 13-1 in games where its opponent scores 70 or fewer points and 0-3 in games where its opponent gets 71 or above. Iowa has been held under 71 just once this season, and has the high-tempo, high-efficiency offense needed to hang with Michigan.

There's another positive sign for the Hawkeyes: Michigan isn't deep by any means. With Mitch McGarry out due to injury, the Wolverines go eight players deep. Those eight guys are really good, though. Nik Stauskas is one of the conference's best offensive players, scoring 18 points per game and shooting 49 percent (44 percent from behind the arc). With Trey Burke in the NBA, Stauskas has developed from a pure perimeter threat to an all-around scorer, and can take over a game by himself. Fellow sophomores Caris LeVert and Glenn Robinson III are equally dangerous. While neither is quite the same outside threat that Stauskas has become, they shoot well enough from the perimeter to stretch defenses and can pour in shots if given the opportunity. Michigan's top three account for 57 percent of Michigan's overall scoring and are on the court together nearly 60 percent of the time. Freshman Derrick Walton Jr. mans the point; he is more a facilitator than a scoring threat, but can knock down an open shot if it's given.

The loss of McGarry leaves Michigan lacking size on the inside. Senior Jordan Morgan has been the ostensible center as of late, but he stands just 6'8, and aside from a 15-point performance against size-challenged Nebraska, he hasn't been much of a factor. Junior Jon Horford is slightly taller (6'10) takes plenty of minutes in the post, but is no more an offensive threat,

Freshman Zak Irvin is a 40 percent three-point shooter off the bench, but has seen his minutes collapse since conference play began. Spike Albrecht asked a swimsuit model out on Twitter once.

The game is a stylistic match for what Iowa likes: A high-efficiency, low-tempo opponent that might not be able to handle Iowa's high-efficiency, high-tempo style. The key to Iowa's success against such teams this year has been its ability to maintain offensive tempo and pressure despite the slow-down on the defensive end. Michigan's aversion to fouls -- both getting them and giving them -- should reduce the usual Big Ten home officiating bias somewhat. Roy Devyn Marble will be just a few miles from his hometown, and could well want to put on a show. Those are all positives. Whether they're enough to overcome a Final Four team playing on its home court, where only the nation's top team has won, will determine Wednesday's game.