Iowa looks for its first win in nearly a decade at Ohio State.

When it came out, Iowa's early Big Ten schedule looked fairly straightforward: Three home games against the league's bottom tier, cut by a trio of road trips against some of the league's best.  While Minnesota has proved to be better than advertised and injuries have taken Michigan down a peg, that early analysis remains largely accurate.

The fourth game of that six-game run comes Sunday, when the Hawkeyes visit No. 3 Ohio State.  Iowa has not won a basketball game in Columbus since February 18, 2004, when [REDACTED] matches wits with a soon-to-be-fired Jim O'Brien.  That Ohio State team finished 14-16.

This one might be a bit better than that.  The Buckeyes dropped their first game of the season at Michigan State earlier this week and should drop in the rankings next week, but that does not change the fact that they are among the conference and national elite.  Ohio State boasts the nation's top defense, and are excellent across the board: Fifth nationally in effective field goal percentage allowed, sixth in opponent three-point percentage, seventh in free throws allowed, top 20 in opponent two-point field goal percentage and turnover percentage.  Ohio State gives up more offensive rebounds than it would like, but otherwise it's hard to find anything they're doing particularly poorly. 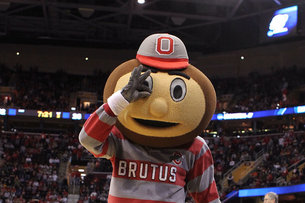 The offense is another story.  Ohio State is surprisingly pedestrian when it has the ball, posting a rather meh 53.1 percent effective field goal rate and turning the ball over once every six possessions.  The Buckeyes again are not a great rebounding team, and are actually quite poor at the line (68.6 percent) and behind the arc (34.2 percent).  Ohio State makes more than half of its two-point shots and does not allow opponents to steal it away -- those turnovers are throwaways and traveling calls, apparently -- but are otherwise fairly manageable.  They simply don't need that much offense to win.

The Buckeyes feature five upperclassmen starters, and keep them on the floor as much as possible.  Ohio State's starters -- Aaron Craft, Shannon Scott, Lenzelle Smith, LaQuinton Ross, and Amir Williams -- have recently played 30 percent of the team's minutes together, while no other OSU lineup combination is on the court for more than 8 percent of the time.

And since he leads the team in minutes, it's high time we talk about Aaron Craft.  We mocked Craft before the season began, believing his neverending hand-checking and flopping would be legislated out of existence in 2013, but Craft has adapted and remains one of the nation's top perimeter defenders.  His scoring is down slightly and his shooting is borderline atrocious (47.6 percent from the field but just 25.0 percent from three), but Ohio State's never relied on Craft for point production.  Instead, he keeps the Buckeyes organized and on schedule in the halfcourt game, dishes out a handful of assists, and locks down perimeter threats on the defensive side.  Scott, who acts as a second point guard for all intents and purposes, is likewise a low-scoring, high-assist perimeter player, though he is slightly more turnover-prone than Craft.

Ohio State only has two players averaging double-digits in scoring: Junior forward LaQuinton Ross (13.1 ppg) and senior guard/forward Lenzelle Smith (12.4 ppg).  Both Ross and Smith are far more lethal perimeter shooters than Craft, and both can play in the paint.  Amir Williams stands in the middle, but his stat line (9.6 ppg, 6.8 rpg, 2.1 bpg) is hardly terrifying.  Junior forward Sam Thompson (6'7, 7.6 ppg, 3.3 rpg) plays more than 20 minutes a game off the bench, and a trio of similar shooting guards/small forwards -- Marc Loving, Amedeo Della Valle, and Trey McDonald -- round out Ohio State's nine-man rotation.  Della Valle is primarily a perimeter threat, and Loving isn't shy from outside.

While there isn't any single superstar on the roster, it's Ohio State's versatility that makes them so good.  Six different guys could be their best player on any given day, and the neverending string of players between 6'4 and 6'8 make them a matchup nightmare for most teams.  Iowa shouldn't have as much trouble with that as many, but it's still a problem when the Hawkeyes go to the bench.  Furthermore, Ohio State has the ability to go small on Iowa in much the same way that Iowa State and Villanova did, even if their game remains much less perimeter oriented when they do so.

But getting hung up on how Ohio State is going to score misses the bigger point: It's difficult to see how Iowa generates much offense against the Buckeyes.  Until Tuesday, no opponent had scored 70 on Ohio State, and it took Michigan State an overtime to do that.  Iowa is 4-11 in the last 15 games where it scored less than 70 (though 1-0 this season, to be fair), and Iowa needs transition buckets to get the score -- and the tempo -- where it wants it to be.  If the Buckeyes turn it over or don't stop Iowa off of missed shots, the Hawkeyes could have a chance.  But that's not the way that Ohio State plays, and with an experienced Buckeye lineup at home, it's going to be extremely difficult to rattle them enough to change that.