Stuff happened. Little of it good.

Honestly, I'm exhausted.  The last few days have been exciting and amazing and grueling and draining and [insert a billion other words].  I'll have a proper recap of Iowa's tournament up after everything winds down tomorrow, because there's a lot to talk about.  It's been yet another disappointing performance for Iowa -- we seem headed to a 4th place finish, barring some impressive Iowa wins today (and a host of Oklahoma State losses in the finals) -- and there's plenty to discuss there.

Friday's morning session was mostly agonizing, with few bright spots like wins by Tony Ramos, Mike Evans, and Bobby Telford to get into the semifinals countered by brutal one-two combinations like the near-simultaneous Brody Grothus and Derek St. John losses or the also near-simultaneous Ethen Lofthouse and Nathan Burak losses about an hour later.  The opportunities have been there for Iowa to make noise in this tournament -- Penn State has made mistakes and opened up the race for other teams and even their main challengers, Minnesota and Oklahoma State, have had their own hiccups along the way.  But those teams have also taken advantage of many of their opportunities and won several big matches (both as favorites and as underdogs), which is why they enter Saturday with a chance to catch Penn State.

The Friday evening session started better for Iowa, with Tony Ramos avenging his early-season loss to A.J. Schopp and advancing to Saturday night's finals, where he'll see a familiar foe, Wisconsin's Tyler Graff.  Iowa followed that up with Round of 12 (or "blood round") wins by Cory Clark, Derek St. John, and Nathan Burak that guaranteed all of them All-America honors this year.  Clark and St. John added additional wins later in the evening that will give them the opportunity Saturday morning to go for All-America spots between 3rd and 6th.  (Burak lost his second consolation match Friday night and will wrestle for 7th place on Saturday morning.)

But the night was tainted by Iowa's final two semifinal matches, losses by Mike Evans (to Chris Perry) and Bobby Telford (to Tony Nelson).  Telford's loss was not particularly noteworthy or controversial, beyond the usual stall-tastic ride that Nelson has made his trademark.  It had all the hallmarks of a typical Telford-Nelson match: Telford struggles to escape, Nelson employs his spiral ride of doom and stalls his way to victory, the referees swallow their whistles.  This one had the additional wrinkle of Tony Nelson actually getting a takedown (after Telford fell slightly after attempting a shot), but it was still more or less the same story that we've seen over and over and over and over again when those two wrestle.

But the Evans match... sigh.  It's painful to have a chance to wrestle for a national championship and then have that ripped away by officiating that was... baffling?  Incompetent?  Farcical?  I don't even know.  The officiating cannot possibly take all of the blame -- not when Evans or the Iowa coaches or both concocted the asinine idea to take down against Perry in the third period, a decision that sent the match to overtime and contributed to Evans' ultimate doom -- but it also deserves all the condemnation and scorn and disapproval that you want to heap across it. 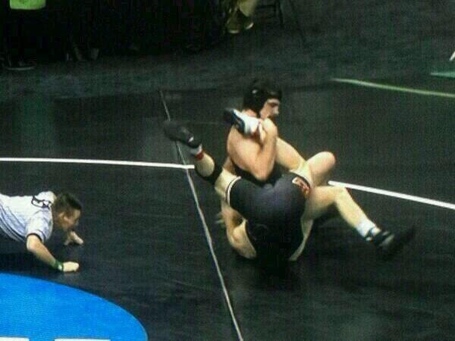 Call the fall. That was a call that a referee decided he wouldn't be the difference.

Big celebration from Perry after being pinned, locking hands and then winning via rear-naked choke. #d1wrestle