I'm not going to lie, it's now two days later and I just can't find any new way to look at this game. So, here's a chart: 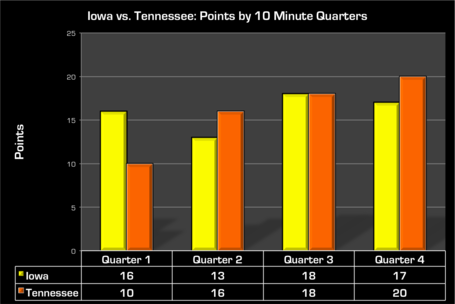 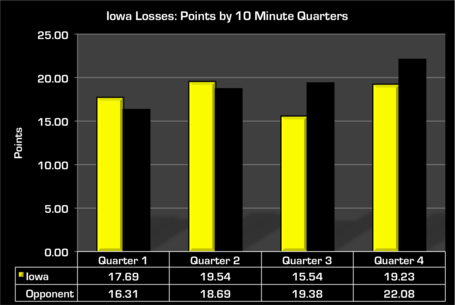 Iowa's defense got worse and worse as games went on this season, and this pattern was even more pronounced in their losses. I already covered this after the Illinois game, so I'm not going to dwell much on this fact again. Whether it was the team becoming fatigued as the game wore on, a lack of adjustments or adjusting to the other team's adjustments, or whatever, Fran will no doubt be looking for answers to this question in the offseason. 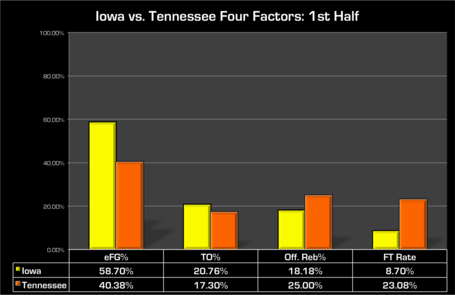 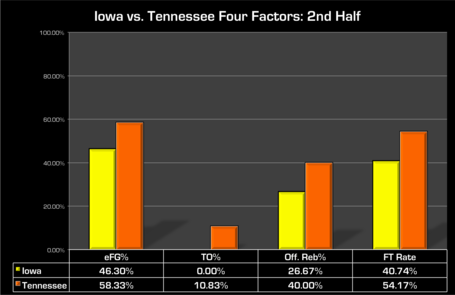 * I didn't include overtime in these because saying Iowa was outscored 14-1 in overtime basically gets the point across the same as putting it on a chart.

That is 66 possessions with an extra 5:00 quarter tacked onto the end of regulation. Tennessee controlled the pace of the game and only allowed for 57 possessions to take place in the first 40:00 of game time. Needless to say, that tempo is less than ideal for Iowa.

The first half was great for Iowa as far as shooting was concerned. When the game began, Tennessee looked as if they hadn't even scouted the Hawkeyes and were just letting them run up and down the court with ease. Iowa's biggest lead was 12 points, but they were even up 11 when the clock ticked to the under five mark in the first half. Then, Tennessee settled in and went on a 12-4 run before halftime. Iowa finished the first half with a 58.70% eFG%, but only averaged 1.00 PPP thanks to losing the other three factors. Tennessee, on the other hand, was feeling pretty good for being outshot by 19 percentage points. Minus the shooting category, they won the other three factors and were only down by 3 points at halftime.

When the second half tipped, both offenses went off. Iowa's offense averaged 1.26 PPP but the defense allowed 1.37 PPP. Tennessee's was fueled by a 58.33% eFG%, while Iowa's was accomplished more by utilizing their other three factors. And then, of course, we got the overtime crapfest where Iowa managed to go 0-8 from the field and Tennessee went 2-4. Bleh.

Neither team really turned the ball over much in this one. Iowa didn't have a turnover in the second half, which helped them average that 1.26 PPP I mentioned above despite shooting only 46% from the floor. Other than that, there's not much to really talk about here. Moving on.

We knew coming into this game that Tennessee had a couple of beasts down low in Jarnell Stokes and Jeronne Maymon, so it's not real surprising that they won this category. Maymon finished with 7 rebounds (1 offensive) and Stokes used his muscle to pull down 13 (4 offensive). However, besides getting pushed around by Stokes, Iowa didn't do too terribly bad at keeping Tennessee away from their misses. They held the Volunteers to 9 percentage points below their season average offensive rebounding rate. That's not bad.

Where Iowa didn't perform all that well, though, was when they missed shots. Iowa's offensive rebounding rate was about 11 percentage points below their season average. And outside of Woodbury (4 offensive boards), the rest of the team was ineffective. When you're missing shots like the Hawkeyes were in the second half, a couple more offensive rebounds would have been nice.

For once, this category isn't inflated all that much. Iowa had to foul at the end, but Tennessee also had a majority of their free throw attempts come before garbage time. This category, after shooting, was probably the second most important one of the game. I don't want to say the referees screwed Iowa against Tennessee, but there were some highly questionable foul calls in the second half that allowed Jarnell Stokes to basically live at the charity stripe. Stokes definitely played a great game and his bull-like strength was on display, as he pushed Iowa around on the block most of the night. But, with that being said, there were a couple of times in a short timespan where Woodbury and Olaseni went straight up on defense (like you are taught to do), Stokes leaned into them, and the foul was called. Now, I know many of the best players are good at leaning into the contact and drawing the foul, but on some of these plays, there didn't even look like there was a whole lot of contact to be called.

Anyway, that's all I'm going to say on that. I'll just finish with a couple of tweets:

Don't like jumping into the defender being synonymous with "you were just fouled."

Overall: Iowa Won One Out of Four Factors 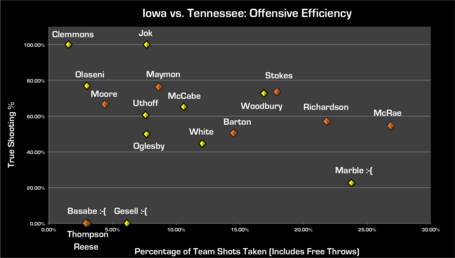 Adam Woodbury was pretty clearly the man of the match. Woody went 8-11 on his field goal attempts (8-10 from near the rim) and came away with 16 points and 8 rebounds. He also played 30 minutes, which were well deserved and the most he's played in a game all season and in his career. I would say we got a little glimpse of what Woodbury can be with some more development. Luckily, we've got two more years of him.

Peter Jok was a pleasant surprise in this game, too. His 16 minutes were the most he's gotten since he had 24 against Fairleigh Dickinson back in December. He used them efficiently too, scoring 10 points on 4-5 field goal attempts (2-3 from downtown). Like Woodbury, he gave us a glimpse of what we could see in the future with a little more experience. And even better than Woodbury, we still have three more years of watching his game get better.

As for the seniors, Zach McCabe actually had the best game of the three. 9 points and 6 rebounds in 22 minutes is a damn fine way to finish a college career. Now, while he most likely would have preferred a poor individual performance and a win, I'm still happy he was able to end his career on a high note. He definitely deserved it.

Then there was Roy Devyn Marble and Melsahn Basabe. Marble took 15 field goal attempts and made only 3. A big part of this was due to his shot selection, as he missed all 6 of his three pointers (40% of his shot attempts), and often settled for mid-range jumpers (47% of his shot attempts). He tried his damnedest to get something going, but it just wasn't happening. It's unfortunate this was his final game in a Hawkeye uniform.

As for Basabe, well, he just hasn't been the same since that illness that suddenly appeared before the Wisconsin game in February. Foul trouble held him to only 9 minutes against the Volunteers, and I'm going to go out on a limb and guess that's not how he wanted to end his college basketball career.

The rest of the team was either non-existent or fairly efficient in small doses. But, while the final offensive performance may not look great, Tennessee is a damn fine defensive team. And before Iowa decided to bottom out in overtime, they were scoring about 1.19 PPP against that defense. That's good. Instead, it was the other side of the ball that doomed Iowa yet again. Of course, it's been the same story all season: The offense does enough to win under normal circumstances, but the defense gets progressively worse as the game goes along and the other team does just enough to pull out a close victory. Tennessee may have won this game by 13, but make no mistake, this was a close game for the first 40 minutes. If Iowa had any semblance of a defense that was consistently good for a 40 minute stretch this season, I'm sure they would have been in much better position to close out more of those nail-biters. Instead, the defense put them at a disadvantage, and they just weren't able to pull it out when the game was on the line this year.

All of this leaves me with one final question for this season: What would this team look like with last year's defense? 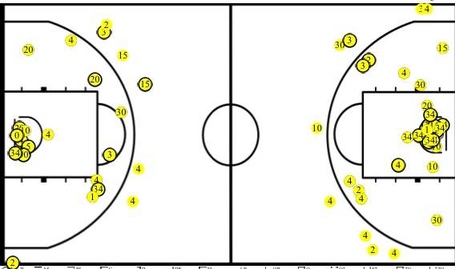 Makes outlined in black, misses have no outline. First half is on the left, while the second half and overtime are on the right.