The tick-tock for this weekend's ACL-free fun!

Your details for this weekend's AIRBHGAPALOOZA 2: The Apology.

SPONSORED BY: BHGP and Backpocket Brewing

THE PREGAME: We'll be tailgating in the backyard at 120 Golfview Avenue, conveniently located around the corner from Kinnick Stadium. 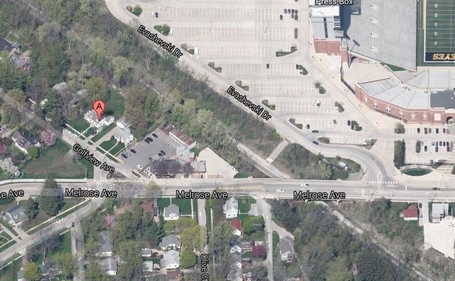 We plan on starting early (UPDATE: We can't get into our tailgate spot until 8:00, so not THAT early), but traffic is always a concern. Look for the AIRBHG pinata head and BHGP banner. Backpocket will have beer samples on the premises. Local ordinances prohibit anything more than shot-glass-sized beer distribution, though, so bring your own beverages and a few for your friends. We'll have burgers and brats on the grill for as long as they last, and the tailgate will continue up to, and maybe a bit past, kickoff.

THE POSTGAME: Much like last year, we'll be partying at Backpocket's Tap Room in Coralville's Iowa River Landing, near the Marriott Hotel off First Avenue & I-80. Festivities will start around 4:00 and go on until whenever. Music and entertainment will be provided by your own Sailor Jerry (a/k/a Twitter's @keepitupguys). Your favorite BHGP personalities will be there, and even RossWB is coming to the party! The piñata will be loaded full of candy. We'll show the AIRBHG video -- we're actually getting it set up in advance this time! -- and we're crossing our fingers that some recent production difficulties beyond our control won't delay the unveiling of this year's PALOOZA beer. We haven't talked about a name for it yet, but we're informally calling it Chocolate & Flowers. Regardless, there's plenty of good beer, and with the weather forecast calling for temperatures around 70 and skies clear, it should be a perfect day to say we're sorry.

THE CAUSE: As always, all AIRBHGAPALOOZA proceeds and donations are for Iowa Touchdowns for Kids, because there's something so right about turning the celebration of a knee-destroying deity into money for a hospital.

So join us Saturday before or after the game for AIRBHGAPALOOZA 2: The Apology! It's so hard to say you're sorry. It's a lot easier when a bunch of your friends are there to help.