It's Not Plagiarism If You Link To It: Heeey Heeey Hey, Don't Stop The Parrr-Tay

Share All sharing options for: It's Not Plagiarism If You Link To It: Heeey Heeey Hey, Don't Stop The Parrr-Tay

WE'RE NUMBER ONE! The University of Iowa did it! It is the new #1 school for....partying. I know some of you got started a little early on this subject in the NFL post comments but hey, don't stop the party.

PHARTY NO PARTY. In other news,

WANNA TALK PRACTICE? PRACTICE? Hawkeye football camp opened with two practice sessions yesterday. The veterans got started in the early morning session and there are pictures of that here. The new faces got their feet wet in the afternoon. There's also practice pics from Hawkeye Sports for that session here.

GREG DAVIS SPEAKS. Along with the pictures is video. Greg Davis talks a little bit about play and package installment. Nate Meier video bombs the segment playing with his package.

NOW THAT CAMP IS OPEN. Here are some talking points from Marc Morehouse, of the Cedar Rapids Gazette. He discusses the hot topics which are: quarterbacks, running backs, a pass rush, coaching changes and the secondary.

I THINK NIU WANTS TO BEAT IOWA, LIKE REALLY WANTS IT. Jordan Lynch talked about preparing for the Hawks following his team's practice yesterday. Meanwhile, the people behind the Jordan Lynch for Heisman campaign are sending swag to media members. Bring your lunch or pack a lunch or something.

IOWA STATE WILL SALUTE JACK TRICE WHEN IOWA COMES TO TOWN. The Cyclones announced yesterday they will sport these nifty throwback uniforms when they host the Hawks. 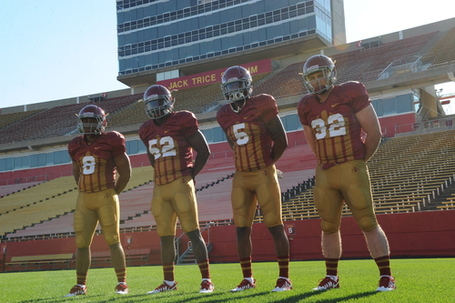 SPEAKING OF RIVALS. I guess Iowa and jNorthwestern are rivals now because this video says so.

HAWKEYE HOOPS IS PREPPING FOR EUROPE. They too are practicing in preparation for an upcoming European Vacation. The coaches and players met with the media yesterday to talk about the trip.