It's Not Plagiarism If You Link To It: Kirk Ferentz Talks Northern Illinois

The first game week press conference of the year happened yesterday. See what Kirk Ferentz had to say about the upcoming game with Northern Illinois.

Share All sharing options for: It's Not Plagiarism If You Link To It: Kirk Ferentz Talks Northern Illinois

FERENTZ SPEAKS. First, there was the Big Ten teleconference. Here's the audio, nothing big. Then, KF talked Northern Illinois before the local media in Iowa City. Here's a link to the transcript and notes. I'll pull some of the major points here bullet style:

And there's certainly a lot more there. Some of it we've heard already. Some of it coach speak. NIU is good. Jordan Lynch is good. Iowa is improving. Moving on.
THERE'S PLAYER INTERVIEWS TOO. Marc Morehouse uploaded 20 videos of Ferentz as well as player interviews. Check his YouTube here to see them all. There's also an On Iowa blog post with the videos if you prefer. Here's Jake Rudock: 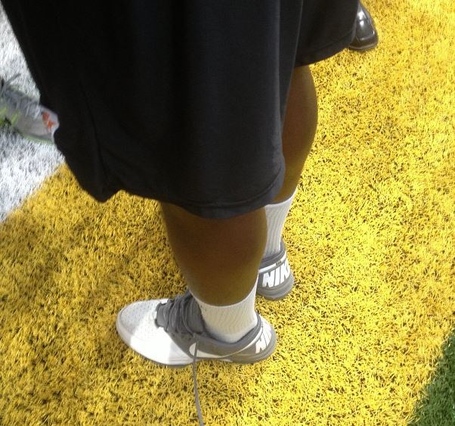 NORTHERN ILLINOIS COACHES AND PLAYERS ALSO SPOKE BEFORE THE MEDIA TODAY. Northern Illinois expects a rowdy atmosphere. NIU has won 21 of their last 23 games dating back to the fall of 2011. Iowa was one of those losses in the 2012 season opener in Chicago.

ALL THE PRESSURE IS ON IOWA. Jordan Lynch accounted for almost 5,000 yards last year and the Huskie coaching staff thinks he'll be better this season. Lynch started his first game at quarterback against Iowa in last season's opener. A win for Lynch and his Huskies - a first for NIU over Iowa - would catapult his Heisman campaign and NIU's chances of repeat BCS Bowl appearances. Iowa is trying to right the ship off a 4-8 2012 season.

SO, THERE'S THIS COOL NEW THING CALLED WINSIPEDIA. You can see where Iowa ranks among the nation's college football teams for various things like total wins or NFL draft picks. You can also compare two teams and see how historically, Iowa ranks against Northern Illinois. Or, say, a team like Iowa State. Let's save that for a couple weeks from now.

THERE'S ALSO THIS NEW THING CALLED HUDDLEPASS. It's a former jNorthwestern QB C.J. Boucher creation. Here, you can read posts by former players of your favorite - and no-so-favorite - teams. Mitch King, Matt Melloy, Ed Hinkel and others have already posted.

STANZI TO THE JAGS.

So Moeaki options are: Wait it out. IR. IR-designated to return. Injury settlement.

IOWA WOMEN'S HOOPS SCHEDULE RELEASED. Seven of Iowa's first Big Ten games will be at Carver-Hawkeye this winter. Lisa Bluder said of the schedule, "the Big Ten is one of the toughest conferences in women's basketball. Every night we step on the court, we will face quality opponents." Iowa will open conference play at Indiana on January 2nd.

WE NOW KNOW ANOTHER IOWA MEN'S HOOPS NON-CON OPPONENT. Iowa will host Nebraska-Omaha on Sunday November 10th. The tip-off time is still TBD. We also know one of the exhibition openers too.

When will we see @TomBrandsHawk first tweet. Person closest to the date will win a complete set of highlight vids, 1990 to present.

LOT'S OF OTHER LINKS BECAUSE GAME WEEK: