It's Not Plagiarism If You Link To It: It's Northern Illinois Game Week

It's here. It's finally here.

Share All sharing options for: It's Not Plagiarism If You Link To It: It's Northern Illinois Game Week

WE'VE ALREADY DISCUSSED THE TWO-DEEPS. What I forgot was the game notes that was also part of the release. Kickoff is set for 2:42 PM (CST). There were still 1,000 or so tickets still available. Fans with tickets are asked to wear Gold as Iowa is calling this the "Be Bold, Wear Gold" game. Get to your seats early for a special ceremony honoring Randy Duncan, Chuck Long and Larry Station as part of the new Kinnick Ring of Honor. The Big Ten Network will have the broadcast. Paul Burmeister, Chuck Long and Danan Hughes will provide the BTN call.

FRIDAY EVENING BEFORE THE GAME. Be in Iowa City for the fifth annual Fry Fest. Casey Wiegmann, Matt Kroul, Hap Peterson and Bill Happel Jr. will be there for a meet and greet with fans. Dan Gable will also be around and the evening will be full of live music and other Hawkeye activities.

IF YOU'RE HEADING TO EITHER EVENT, HYDRATE. It's gonna be hot folks. Like near record hot. I'm not your mama so I won't tell you what to do but start your hydrating Wednesday if you want to make it through Saturday afternoon. 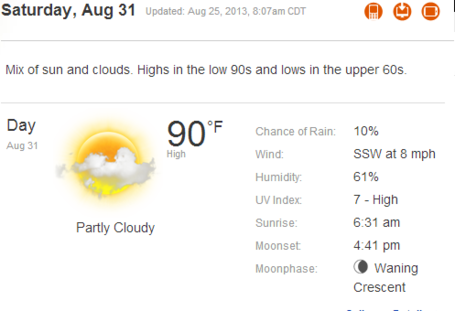 THE BIG TEN NETWORK AIRED THEIR IOWA PRACTICE REPORT LAST NIGHT. If you missed it there are several repeats today. Also, you can watch it on BTN2Go. They talked to Kirk Ferentz, Greg Davis, Mark Weisman and Phil Parker. There wasn't much more than what we'd already read via Twitter or saw on YouTube. Still, it's worth 22 minutes of your time.

HOW BOUT A HOT RUMOR. This is from the Hawkeye message board circuit: Anthony Hitchens may have injured a knee (severity uknown) and could miss some time. Junior Quinton Alston may take over middle linebacker and James Morris move outside. Again, this is all message board stuff so take it for what it's worth.

ALSO FROM THE MESSAGE BOARD SCENE. If you drive back towards Des Moines and make SoundOff a regular part of your post game routine, here's some news from Hawkeye Nation's Jon Miller. There will be a new host this year as Jon is moving on with life.

MOAR PREDICTIONS. Scott Dochterman, of the Cedar Rapids Gazette, thinks Iowa will finish 7-5 this season. I replied on Twitter that I see the exact same (8-5 after a Bowl win). Doc has Iowa in the Heart of Texas Bowl at the end of the season. He also picks Michigan State to win the Legends Divsion.

THE OWH SAYS IOWA IS LIKE A BEAT-UP PICKUP TRUCK. Here's the Omaha World-Herald predictions in which, surprise, Nebraska wins the Legends Division. They did this thing where they match each team with a vehicle.

HAWKS IN THE NFL. The Kansas City Chiefs hate America. Yesterday they waived Ricky Stanzi. AJ Edds got cut last week by the Patriots. The Eagles cut nine from their roster but former Hawkeyes Matt Tobin, Julian Vandervelde and Bradley Fletcher are still on the team. This is the first major cut down of the preseason and teams will continue to trim their rosters through Tuesday.

There's good news too, Allen Reisner caught another TD pass over the weekend and looks like he'll be a solid contributor in Jacksonville. Also, Micah Hyde had a strong game and played the most snaps of any Packer Friday night. Instead of a Hawks in the NFL post this week we'll just use the comments here as today and tomorrow move along.

WHAT ABOUT THIS WEEK'S ENEMY? The Chicago Tribune is a good place to start to get to know the Northern Illinois Huskies. There's also their 2013 media guide. NIU held a mock game to close out their summer camp. Here's a recap of their position battles and some players emerging from camp. Finally, they plan to play some true freshmen this season and here's a report on which to watch.