It's Not Plagiarism If You Link To It: Jim Delany Stops By Iowa Football Practice

Have a seat, Big Jim.

Share All sharing options for: It's Not Plagiarism If You Link To It: Jim Delany Stops By Iowa Football Practice

#B1G Jim Delany reads the back of a chair given to him by #Hawkeyes AD Gary Barta in honor of his 25 years of service pic.twitter.com/uD7PJpPSS1

THE CHAIR WAS A GIFT FROM THE UNIVERSITY OF IOWA. On it reads:

WITH DELANY THERE, YESTERDAY'S PRACTICE PICS INCLUDE A LOT OF TASSELED SHOES. Here's the photo gallery from Hawkeye Sports. Is that Donnal at right guard?

DELANY STOPPED BY IOWA AS PART OF HIS BIG TEN TOUR. We learned some things while he was there. Delany spoke briefly with the Iowa players and then later with the media. Conference expansion talk is "pretty calm," according to Jim. The current focus is the addition of Maryland and Rutgers next year. He also talked about November night games and the conference affiliations with bowl games.

For Iowa specifically, Delany was asked about the Iowa-Nebraska Hero's Game that ends both team's season on the Friday following Thanksgiving. It's part of rivalry week in the Big Ten. He said,

"We like to use that Friday if we can find a good game to put in it; both Iowa and Nebraska have been willing to play it. I hope they continue to stay flexible and open. I really don't know where it goes in the future."

MORE FOOTBALL PREDICTIONS. And they're not good. College Football Talk predicts Iowa will finish fifth in the Legends Division this season. One ahead of Minnesota. ESPN Big Ten bloggers have already picked Iowa to finish at the bottom and yesterday they took a look at the win total over/under. Iowa's is set at 5.5 and both Adam Rittenberg and Brian Bennet think Iowa will finish below that mark.

YESTERDAY, WE GOT TO SEE THE NEW VIDEO BOARD AND RING OF FAME. There's also new wall posters on the outside of Kinnick. Here's a couple pics that were tweeted yesterday: 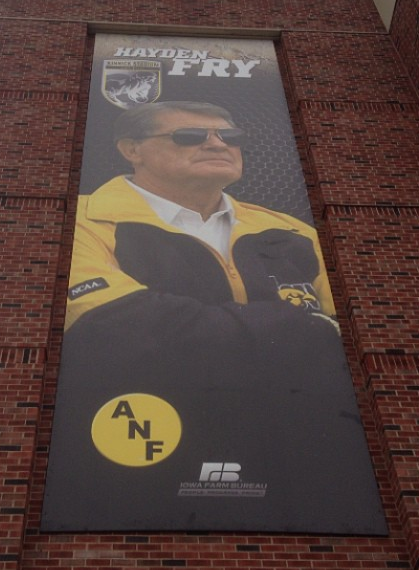 ABOUT THE DLINE. Iowa plans to use a heavy rotation along the defensive front. That's the norm now with college football full of fast-paced spread-you-out style offenses. Iowa's attrition problem with the position has perhaps moved West. The Hawks are building depth but the second unit is young and will need to gain experience.

THE RUNNING BACKS. Iowa appears to be stockpiling running backs. I'll be honest, I'm too afraid to even write anymore about this topic. Here's the link. Read it if you want to take your chances.

MORE ABOUT THE NEW VIDEO BOARDS AND SOUND SYSTEM IN KINNICK. Here's a slideshow from the Gazette. Interestingly, the sound system won't be completed until next year. Gary Barta did say that "it will sound better" this season though. Also interesting, the coaching staff will have some input on how to use the South end zone large screen.

MORE ON THE ESPN GABLE PIECE. Wright Thompson is one of the best sports writers currently in the business. He joins Mike Hlas on his podcast to discuss his piece on Dan Gable published this week. If you read the profile you'll want to listen to this.

HAWKEYE BASKETBALL IS BACK IN THE STATES. Vacation's over kids. Now sit down and enjoy a picture slideshow of the trip that was. Mike Hlas breaks down the final stats and notes Iowa did well distributing the production. 11-man rotation? Yes, please.