A Pessimist's Guide to Iowa's Season

Everyone is assuming that most things will go right for the Hawks this year, but in this simulation we take a look at what happens when absolutely everything goes wrong.

Share All sharing options for: A Pessimist's Guide to Iowa's Season

Most prognosticators have put Iowa at somewhere in the 5-7 to 7-5 range, but no one is talking about just how badly this season could go if a few key things go wrong. If everyone stays healthy and younger players develop, sure, Iowa could be back in a bowl game this winter, but how often does everything go right? By considering various factors – statistical estimates of Iowa's players and their opponents', home-field advantage, weather, and possible injury – we have created a simulation of Iowa's season that we believe accurately predicts what Iowa's season will be like if everything goes wrong.

The season starts off in a promising fashion, with Iowa jumping out to a 14-0 lead on the Huskies courtesy of a Jordan Cotton kick return and a Jake Rudock pass to C.J. Fiedorowicz. Shortly before half, however, three of the team's offensive linemen are forced to exit the game due to heat exhaustion (although it is a relatively mild day for late August). Austin Blythe, Brandon Scherff and Brett Van Sloten all remain in the locker room for the remainder of the game. Without their strongest blockers, the team struggles to move the ball, and Northern Illinois is able to chip away at the lead, finally winning the game on a last-minute field goal. NIU 17, IOWA 14

Blythe, Scherff and Van Sloten have been admitted to the University of Iowa Hospitals and Clinics for further treatment. The doctors now believe that the three may have caught an infection from an unwashed knee brace that they happened to wear on different occasions in practice. The team soldiers on without them and is able to dispatch Missouri State without too much difficulty. IOWA 31, MISSOURI STATE 14

Iowa is back to full strength against the Cyclones, with all the original starters on the offensive line back and in uniform. The game is a hotly contested, physical contest, and both teams top 100 yards in penalties on the day. Blythe, Scherff and Van Sloten seem to have more than regained their old strength, and block with an almost freakish intensity. Multiple personal fouls on the trio help to kill several Iowa drives, though, and a last-second field goal delivers the game to the Cyclones. After the game, media reports emerge that several players confronted the offensive linemen about their play and that a scuffle developed. Cody Sokol, Faith Ekakitie and Anthony Hitchens are all treated for bruises and lacerations around their throats and arms. IOWA STATE 23, IOWA 21

This is the game where things start to fall apart. Iowa builds up a seemingly insurmountable 24-0 lead in the second quarter, but after halftime an incident takes place that completely changes the game. Linebacker James Morris, who had been sent to the locker room after exhibiting some of the same symptoms of fatigue and confusion as Blythe et al., returns to the game looking pallid and sickly. On his first play back in the game, a Western Michigan wide receiver jabs at Morris's face-mask, managing to knock it to the ground. Seemingly in a rage at the illegal use of hands to the face, Morris tracks the receiver down a few seconds later, and retaliates violently: 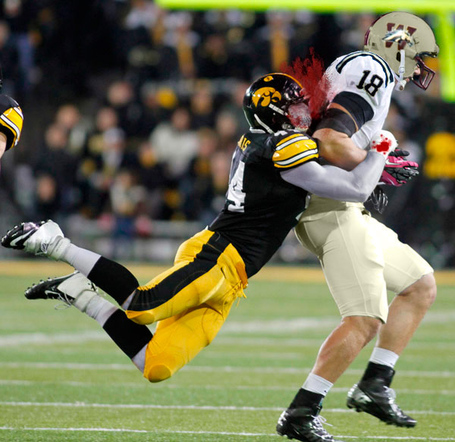 Morris is immediately ejected from the game and is eventually charged with battery. He is initially held at the Johnson County jail before being transferred to the UIHC for medical observation.

Seemingly shaken from the events of the game, Iowa plays poorly the rest of the game. An endless series of miscues and missed assignments allows Western Michigan to roar back and win the game. Their coach, furious at the Morris incident, refuses to shake Kirk Ferentz's hand or even let his team shower in Kinnick Stadium, and instead forces his team to leave immediately and board the bus back to Kalamazoo. IOWA 27, WMU 28

Commentators talk before the game about how Iowa's season is in a complete shambles. The team is 1-4, their starting middle linebacker has been flown to a CDC facility in Atlanta, and their passing game still hasn't gotten off the ground. But the team marches out onto the field in Minneapolis led by a bold new leader: 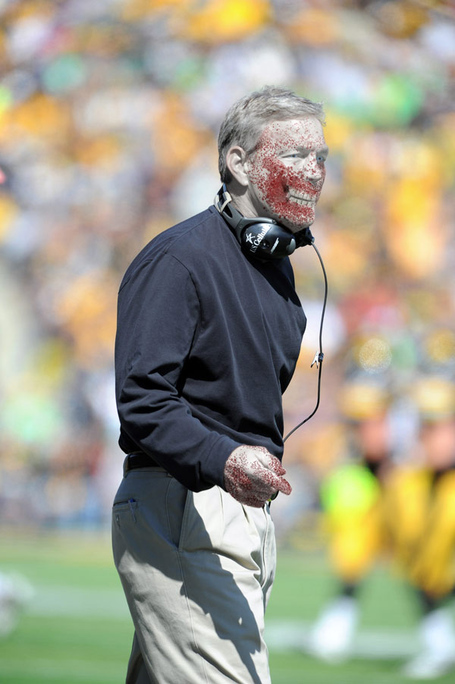 The gore-bedecked fiend refuses to say anything to the sideline reporter other than a cryptic "brains... execution." Bob Griese, the ESPN commentator in the booth, interprets these remarks as follows: "Clearly Ferentz is fed up with all the mistakes and penalties that have plagued this team. He wants his players to use their 'brains' and execute the dang plays." Griese later adds: "You can see how much this losing streak is bothering him – the guy looks like hell."

The game seems to promise more of the same, with Minnesota returning the opening kickoff for a touchdown and immediately recovering an Iowa fumble on the next kickoff and scoring on the subsequent possession. Iowa's defense looks sluggish and the players seem to be reaching and gouging rather than tackling. They draw a couple head-scratching personal fouls when players rip off the helmets of Golden Gopher players and scratch their heads.

Then, on the Gophers' fourth drive, a strange thing happens: the entire Minnesota team collapses on the field in the middle of a play. Iowa recovers the ball and returns it 72 yards for a touchdown. For the rest of the game, Minnesota's players look disjointed and confused, and Iowa feasts on their mistakes, returning seventeen fumbles for touchdowns. When the game is over, the Hawkeyes have beaten the Gophers by 112 points.

No one has heard from Springfield, MO or Kalamazoo, MI for days. IOWA 126, MINNESOTA 14

Spartan coach Mark Dantonio refuses to bring his team to Iowa City, saying "I'm competitive, but I'm not insane." Offensive coordinator Greg Davis calls out Dantonio in a press conference, saying "Mark ... just ... looking out for ... players. Doesn't want our boys ... to hurt 'em ... too bad. Let's ... give him ... a hand." 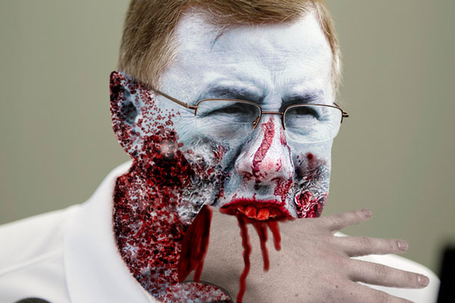 The government has turned Minneapolis into a quarantine zone. Chicago residents have erected hasty barricades to separate themselves from the outer suburbs. IOWA WINS BY FORFEIT

Against the recommendations of the state's governor, Ohio State coach Urban Meyer decides his team will play against Iowa. "I don't believe in ghosts and if these clowns want to put on some face paint and commit personal fouls all game, bring 'em on."

The game is a slaughter. Also, Iowa wins handily. Then this happens: 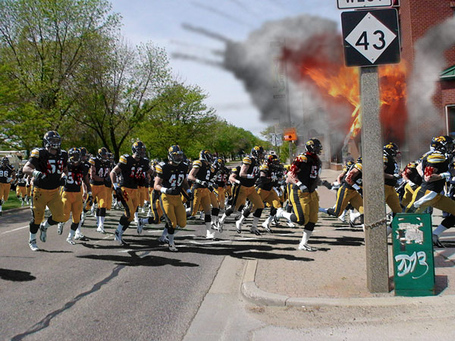 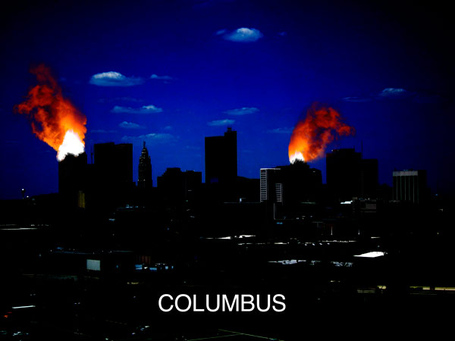 The barricades in Chicago have managed to hold off the rampaging hordes from the suburbs. Steely-eyed hipsters in the Ukranian Village quip "this isn't the first time those assholes from Naperville tried to ruin our city." Northwestern coach Pat Fitzgerald surprises many in the city by inviting Iowa to play his team, but reassures city officials that "I have a plan". When Iowa arrives in the locker room at Ryan field, Fitzgerald contrives to lock them in, then begins pumping in an experimental gas that he believes will "either cure those bastards or send 'em to their maker." The Hawkeyes claw fruitlessly at the doors, but finally the entire team lies unconscious on the floor.

Except Nico Law, who finds a loose ceiling tile, escapes and opens the doors from the outside.

Wisconsin and Michigan refuse to travel to Iowa City, arguing that it is forbidden by law for citizens to enter the "quarantine zone" that now stretches from western Michigan to Arkansas. Meanwhile, Iowa is unable to scale the 100-foot walls separating them from West Lafayette and Lincoln, Nebraska. All teams involved take their cases to the NCAA for immediate judgment.

Iowa argues that Michigan and Wisconsin could traverse the QZ if they so desired, and so they must accept a "forfeit" in the games involved. Purdue and Nebraska, conversely, argue that "it would be a simple matter for any mentally competent human to make their way past the security walls", and that Iowa must, therefore, forfeit.

The NCAA, relocated to a dirigible floating over Maryland, delivers a split verdict. IOWA DEFEATS MICHIGAN AND WISCONSIN BY FORFEIT, LOSES TO PURDUE AND NEBRASKA BY FORFEIT

Iowa does return to playing winning football, but at a terrible human cost. Eventually the contagion is controlled and Iowa's players regain their original human form, although with a slight loss of speed and agility. Scientists at the CDC determine that poor athletic hygiene was indeed responsible for the outbreak and admonish athletes everywhere to "wash your knee pads". The residents of Chicago begin to rebuild.

In all the chaos, however, one team managed to stay one step ahead of the infection and, due to a string of forfeits and victories over disease-ravaged opponents, to win all their games, including a BCS championship game against an overmatched University of Hawaii. 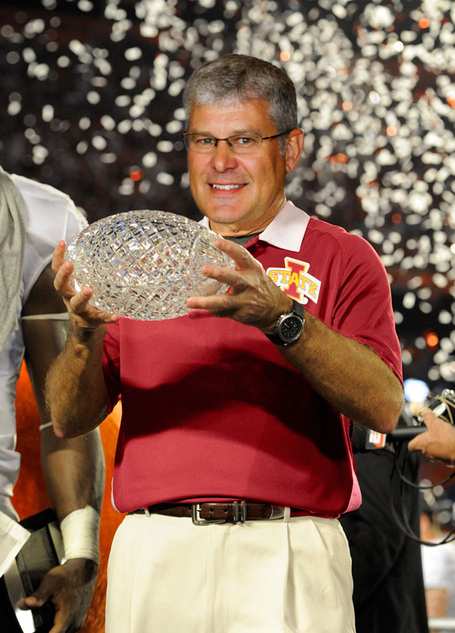 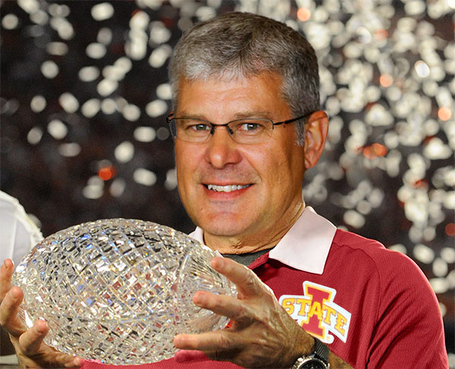 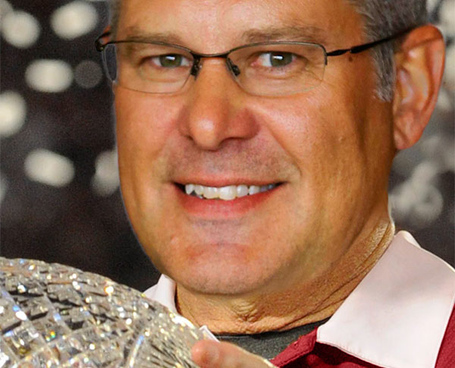 THIS HAS BEEN A CAUTIONARY TALE COURTESY OF BHGP: WASH YOUR ATHLETIC GEAR REGULARLY, FOLKS! 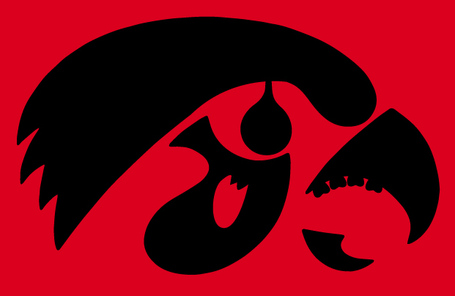