Why our alligator friends and neighbors need to stay the heck off the gridiron.

Hello again, friends. As you'll recall, just three short months ago we brought you the troubling story of Joker Phillips apparently trying to recruit horses to play wide receiver for the University of Florida Gators. This is an awful idea, of course, one that has no basis in reality or common sense. Horses cannot play human football and they should not be encouraged to try.

Well, it's three months later and we have good and bad news. The good news is there are no horses playing football for the Florida Gators or anybody else. The bad news is that Mr. Phillips is evidently recruiting other animals. Observe. 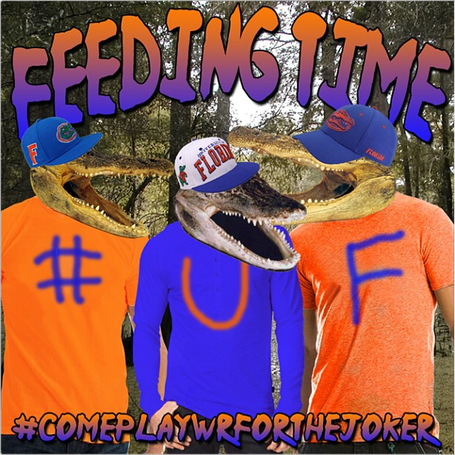 (NOTE: this is an actual thing Joker Phillips put on the internet)

Now hold on just a second here. There are a lot of possibilities as far as what Phillips is getting at here. One thing's for sure: none of them are good.

Maybe Phillips thinks that part of being a Florida Gator football player is that you get your head cut off and replaced with an alligator head. That is not a good idea. Cutting off human heads will kill them, which is murder, and even if you somehow don't murder your players by giving them alligator heads, guess what? Now they have alligator heads with tiny little alligator brains! Alligators don't know words or human society things, they only know biting really hard. There's more that goes into football than biting, I promise you that.

Maybe Phillips thinks that Florida Gators football players get to wear alligator heads instead of helmets. WRONG. Everyone has to wear regulation NCAA helmets regardless of what your team name is. Otherwise Iowa players would have to cover their heads in birds' eyes, and that is disgusting!

Or maybe Phillips thinks that some alligators have human limbs and bodies and thus they might be able to play wide receiver with their human arms and legs. WRONG. Here are some facts and figures about alligators that prove that they can't play human football.

1) Alligators, like all reptiles, are cold-blooded. The Big Ten (and really most of college football) prides itself on its players' ability to thrive in inclement weather, whether it be the monsoons of the south or the frozen tundra of the north. Alligators might like warm, wet weather, but their lack of ability to survive cold temperatures is a major liability. You have to be able to trust your teammates.

2) Alligators are not athletic. Sure, it's neat to watch an alligator swimming along or whatever, but football takes speed and acceleration and alligators are not capable of these things. They are slow, plodding beasts who are so low to the ground they can't gain any leverage on humans or do anything else. If anything they're a liability to get stepped on, and then you've got a human with a twisted ankle and an alligator with cleat marks. Lose-lose.

3) Alligators will bite you wide open. Biting is a foul! If all you want to do is use your giant razor-sharp teeth and powerful jaws to bite down on what you think is prey, then you know what? Football's not for you.

4) Alligators can't be trusted to follow rules. Name an alligator that knows human language or a complex set of instructions. You can't. Pop culture hasn't even tried to do a fake Hollywood aliigator who's smart and can communicate because nobody would ever believe it, not even as a joke. Alligators have tiny alligator brains. They don't know anything.

5) Alligators can't hold onto the ball. Alligators have tiny limbs, like those of corgis, except not cute at all. Their claws or paws or whatever you call alligator hands are meant to grip the ground or swim—which is to say they're never free for carrying a sports ball. And would you trust an alligator to have a football in its mouth without deflating it? No chance; remember, alligators don't know anything except biting really hard.

6) Alligators don't fit in human pads and uniforms. Look, alligators are basically all head and tail. If that's how Hayden Fry The God made them, fine, but let's not pretend we can fit football pants on these beasts or that any of the leg pads would fit onto alligator legs. Same with a helmet. Helmets are for human skulls, and the best you'd be able to do is just rest it on an alligator's giant head over its eyes. What would that even accomplish? It would just tumble off the moment the alligator was tired of it. And human mouthguards? On an alligator mouth? Ridiculous.

7) It is an abomination of nature. Alligators aren't meant to play human sports and everybody knows it. They should just go back in the swamp where they belong. Do alligators even want to play human football? That's never even been documented and yet here we are anyway, with BHGP having to lead this discussion toward sanity yet again. Shame on Joker Phillips for trying to exploit alligators for human football purposes. If alligators are to be exploited, it should be for their skin and/or their meat. The end.