It's Not Plagiarism If You Link To It: Hawkeyes Invade London

Fran McCaffery's squad is overseas taking in the sights and will play some hoops too.

Share All sharing options for: It's Not Plagiarism If You Link To It: Hawkeyes Invade London

YOU SOUND LIKE YOU'RE FROM LONDON. Fran McCaffery's men's basketball team landed safely in London yesterday and have been sightseeing ever since. Here's a photo gallery of day one in London. Iowa will again take in more of the town today before playing their first game against the London Lions. There will not be a stream of the game so all we'll get is a recap and our imaginations. They tip at 1:30 PM (CDT) today and Iowa Hoops will have updates via Twitter. Check the comments below as we'll embed tweets with game updates.

Hawkeye Gameday!!! No stream or live stats tonight, but we will be tweeting throughout the game to keep fans updated. #HawksInEurope

WHILE WE WAIT, LET'S DANCE.

Dancing with the Hawks -- Peter Jok & Mike Gesell (via iowahawkeyehoops)

EXPECT FRAN TO EXPERIMENT. He'll be without Mike Gesell (he talks about his broken hand here) but have Jarrod Uthoff and Peter Jok to work with on this trip. Lineups will be interesting as Fran will certainly play around with combinations. While a lot of the talk has been about how Fran will distribute minutes among the guards, there's still things to sort out with the forwards too. Zach McCabe said, "the coaches have said they are going to be looking for combinations that they believe can work during the regular season and everybody is working to make the most of any minutes we can get now.''

FOOTBALL PRACTICE PICS CONTINUE TO ROLL OUT. Hawkeye Sports has released two sets of practice pictures almost everyday since the start of fall camp (yesterday's set one and two). The team will scrimmage today, according to Brian Ferentz's Twitter account, and again for the public at Kid's Day, Saturday evening. The latest pics show lots of Rudock and lots of option. There's also the Man-Baby - everybody's favorite frosh - Leshun Daniels. 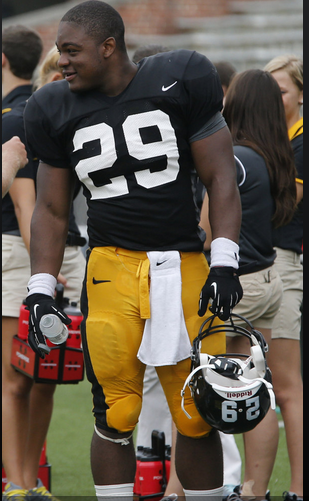 ONE RUNNING BACK THAT'S RARELY GETTING MENTIONING. Barkley Hill has recovered from last season's knee injury that forced him to red-shirt his first season on campus. Hill appeared ready to play as a true freshman and was slightly ahead of Greg Garmon on the depth chart before injuring his knee on the final play of a Hawkeye scrimmage. Hill will not play against Northern Illinois as he's suspended for one game stemming from a DUI last November. With Missouri State as the second game on the schedule it's likely we'll get our first glimpse of him in game action.

WE CAN MARK AT LEAST ONE GAME DOWN AS AN AUTOMATIC LOSS. The fine people at Wide Right Natty Light did their predictions for the upcoming Cyclone Football season. Every contributor predicted the outcome of each game on their schedule. Every contributor predicted a Cyclone win over Iowa. There's some excellent analysis that comes with the predictions. Contributor Norman Underwood believes the game will be "an ass whooping," because "they (Iowa) suck." ClonesJer writes, "Iowa's emotions and our tradional lack of offensive compentency keeps it close, but its never really in question." And finally, CyforPresident predicts a Clone win because Iowa "is terrible," and "just awful."