The Kinnick family has it all, so why is nobody happy?

Dad is a successful lawyer. Mom, an award-winning scientist. One son is beginning law school; two others are star athletes in the classroom and on the field in high school.

And nobody is happy about it.

After playing around with the popular PC game "The Sims" for a few months, Hiawatha resident and Iowa Hawkeye diehard Eric Smith decided to get serious and the results have been more than he expected.

"I'll be honest, I bought the game just to see how many pixelated chicks I could score with and how fast I could get somebody to die," Smith said. "Then that got boring and I decided ‘let's live the life of a true Hawkeye'."

Thus, the creation of the Kinnick family. Hayden, the patriarch, works at a law firm that Smith has dubbed ‘Evashevski, Fry, Ferentz and Kinnick', while his loving wife Vivian works as a scientist.

The family's oldest son, Nile, is in law school, while twins Terry and Tom are straight-A students at the local high school and star athletes.

The Kinnicks have the largest house in their neighborhood, have few needs and have maxed out their love stats.

Needless to say, the family's success has been a surprise for Smith.

But not nearly as much as the backlash.

Smith shared the antics of his previous Sims creations on a number of Iowa Hawkeye message boards, so the prosperity of the Kinnicks was met with some trepidation.

"Most of my Sims were horn-dog Hawk fans like me, so I made a point to post some of my better adventures," Smith said. "When Hayden graduated from college nobody believed me." 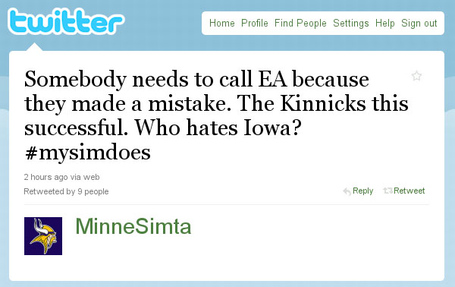 "I don't think a day has gone by where I haven't heard about the Farts," Smith said of the family he made right before the Kinnicks. "Everybody loves to reference the Farts, but guess what, that's over, that's behind me. This is a new family and a new year."

Smith added that the Kinnicks' success did not happen right out of the blue.

"There have been flashes, one of my creations, Hugh Jass, held a job for a year or two, and Daniel Murray Clayborn Greenway Hodge had a wife," he said. "I've shown flashes. This could happen."

That, however, has not slowed the stream of incredulous responses.

"I get about 40 responses a night through Twitter and Facebook," Smith said. "It seems nobody can figure out how this happened."

That's OK with Smith, who is looking forward to taking the family to even larger heights this fall.

"Mark my words, someday a Kinnick will be president and the Sim Universe will be better for it."