Share All sharing options for: The Most Realistic Iowa Football EA Sports 2014 Simulation On the Internet | B1G Championship Game

HOW'D WE GET HERE? The Hawkeyes are a perfect 12-0 on the season and 8-0 in the Big Ten Conference. The Buckeyes finished the regular season 9-4 and 5-3 in conference play. Iowa wins the Legends Division and Ohio State the Leaders. They met in Indianapolis, home of the Big Ten title game.
THE HAWKEYE BANDWAGON IS FULL. Iowa's perfect record and outstanding offense have them considered one of the most exciting teams in college football. Iowa sold out its allotment of tickets for the game in Indianapolis. Tickets for the championship are selling at close to $500 per ticket and above.
Hawkeye fans hit the road to Indy

IT WAS BILLED AS THE BIG TEN'S VERSION OF BASKETBALL OF GRASS TURF. The two best offenses in the league met in a rematch of a game that resulted in 90 total points. Kirk Ferentz was asked how he prepared his team for such a big moment and he told reporters, "I took a really, really, really long measuring tape and measured the field. I wanted to show the boys that the field is the same measurements as our practice field back home. It took a really long time, because of the measuring tape and the distance and all that, but I think they got the point."

The Hawkeyes won the toss and held to tradition as they elected to receive.

For the first time all season, Iowa was held scoreless on their opening drive. The Juggernaut coughed up a rare fumble in Ohio State's territory and the Buckeye offense took their turn on the field.

The Buckeye drive stalled and they were forced to punt the ball over to Iowa. The Hawkeyes were held out of the end zone but did put three points on the board to take a 3-0 first quarter lead. That would be the only points scored between these two high flying offenses in the quarter as it appeared that both defenses had the other figured out.

The Buckeyes would score next on a 20 yard pass from Braxton M. to C. Watkins. The Buckeyes held a 7-3 lead and Iowa faced a deficit for the first time since the fourth quarter of the Michigan State game.

Iowa's offense finally got it going as did Ohio State's the next three quarters were so good that they can only be summarized in this 1980's style montage.

It was the fourth quarter and Iowa found themselves with little time and dwindling hope. The Buckeyes rallied furiously in the fourth to score 20 points and take a 41-38 lead. The Buckeyes had the ball and Iowa was left with only one time out. It was third down and six and then the Hawkeye luck started to change.

B. Boots with the big play

Hawkeye offensive coordinator Greg Davis huddled his team together to discuss the final plan of attack. They were too far away for a field goal and he knew he needed some magical play to win the game. "Boys," said Davis, "we're gonna run our trick play we call the picket fence. Jugger, they're gonna expect the ball to go to you and we're going to use you as a decoy and run the play action." There was a moment of silence and the rest of the team hung their heads. Suddenly, the Juggernaut told his team, 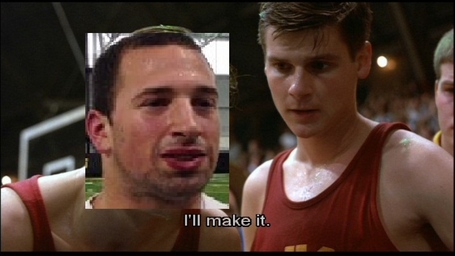 There was a brief pause and then Davis responded with "fine" and drew up his team's next play. What happened next will forever live in Hawkeye legend and lore.

The Iowa Hawkeyes are your 2013 fake Big Ten Champions

Despite friction earlier in the season the handshake was friendly

Fake Kirk Ferentz gets the trophy 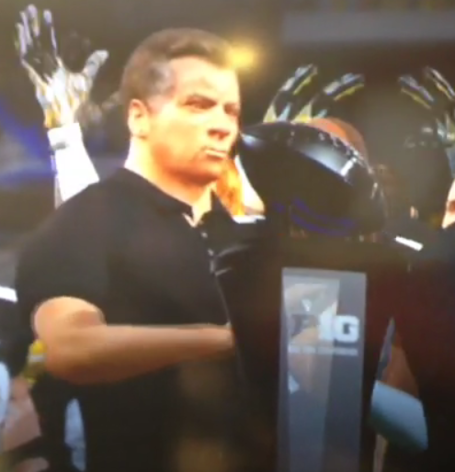 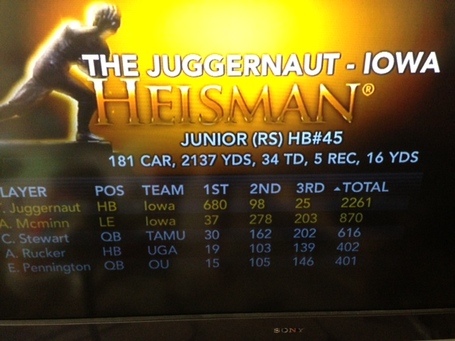 Juggernaut's amazing season also earned him the Maxwell, Walter Camp and Doak Walker Awards. R. McSack wins the Bednarik, Nagurski and Lombardi Awards. C. Fijgfdreqzcgh wins the Mackey Award and J. Cotton is named the nation's top return man.
LOOKING FORWARD
Georgia wins the SEC Championship game over Alabama and the final BCS National Championship game is all set. It's Iowa and Georgia for the crystal ball. Both teams are undefeated and conference champions. The final BCS standings list Georgia at #1, Iowa at #2.