It's Not Plagiarism If You Link To It: Big Ten Media Days Begin Tomorrow

We want to thank you for powering through the slow news months of May, June and July. Rejoice! Football is almost here.

Share All sharing options for: It's Not Plagiarism If You Link To It: Big Ten Media Days Begin Tomorrow

YOU CAN FOLLOW THE MEDIA DAYS ON BOTH ESPNU AND BTN TOMORROW. Each University's head football coach will speak. Some officials and Jim Delany will too. Urban Meyer's time at he podium may be interesting since half of his team was arrested or implicated in a crime of some sort yesterday. Kirk Ferentz will have things to say too. We'll have wall-to-wall coverage here also.

THE B1G WRITERS RELEASED THEIR PRESEASON POLL. Iowa is picked to finish 5th in the Legends Division. One spot behind jNorthwestern and one ahead of Minnesota. The writers were split between Michigan and Nebraska winning the Legends Division title. They were unanimous in voting that Ohio State would win the Leaders Division and Big Ten crown. They also voted on offensive and defensive player of the year awards.

THE CEDAR RAPIDS GAZETTE IS COUNTING DOWN TO KICKOFF WITH PLAYER PROFILES. The list starts with #45 which is Maurice Fleming, a wide receiver who converter to corner last year. Number 44 on the list is a very important part of the team but often overlooked, long-snapper Casey Kreiter. Number 43 is another corner, perhaps Iowa's next-man in, Sean Draper. Number 42 is joins Fleming as the second red-shirt freshman to make the list, backup lineman Ryan Ward. Number 41 is a walk-on linebacker from Urbandale who surprised people last year when his name appeared in the two-deeps, Travis Perry. Number 40 isn't one player but a pair of players. Jake Duzey and Henry Krieger-Coble figure to factor in this year at "Y" back. Number 39 is another group, the backup defensive ends. Number 38 is simply wide receiver depth. And finally, #37 is another backup linebacker, Cole Fisher. We'll keep an eye on this series in the "Other Links" as it counts down as it's nice to get a roster refresher before kickoff gets here.

YOU MAY HAVE HEARD THE RUMORS.

You guys know about James Morris and Jordan Lomax appendectomies, right? I have no idea how long they're out if they're out at all.

IOWA'S OPENING OPPONENT NIU, HELD A TWITTER Q&A WITH THEIR QB JORDAN LYNCH. I asked a question and he answered.

Hi @PlannedSickDays Yes, I do feel more prepared. I have more experience as a 2nd year starter. We have a whole season of game film

AARON WHITE TALKED ABOUT RUSSIA AND TEAM USA. In a press conference held yesterday, Aaron White spoke with reporters about his experience with Team U.S.A. at the University Games. White talked about building confidence throughout his experience and bringing that back to his Hawkeye team. He'll now add another notch on his travel "been there" list when he heads to Europe with the team next month.

THE PTL WRAPPED UP. Anthony Clemmons has now done something Lebron James has not, win a PTL championship. Clemmons' team rode his shoulders as he poured in 32 points in the PTL finale to win in blowout fashion, 96-78. HawkeyeDrive has had the PTL scoop all summer and here's some final thoughts on the league now that's it's finished. We can now move on to reading about some real basketball as the team soon heads to London. 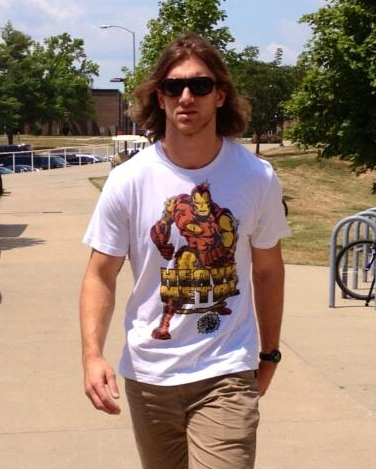 MARVIN MCNUTT IS HAVING SOME UPS AND DOWNS WITH THE DOLPHINS.

Marvin McNutt had a very quiet day after tearing it up on Sunday. That's training camp for you.