Share All sharing options for: The Most Realistic Iowa Football EA Sports 2014 Simulation On the Internet | Nebraska

MONDAY. Last week the Hawkeyes were the hottest topic around college football with the Epic Brad Banks scandal but they would be replaced by the Cornhuskers which rocked the college football world with breaking news of their own. Nebraska was fresh off of a 30-9 win over Penn State and sitting at #5 in the BCS rankings. They were to play Iowa for the Legends Division crown and a chance to play in the Big Ten Championship game in Indianapolis. The BCS prognosticators did the math and even if Nebraska were to win the next two games they would still fall behind a two loss SEC team and not play for the BCS title. This news infuriated Nebraska faithful and Athletic Director Shawn Eichorst responded by firing head football coach Bo Pelini.
"We at Nebraska realize there is still a lot at stake for this season and the Cornhusker Football team," Eichorst said in an afternoon press conference. He continued, "division championships and Big Ten titles are nice but here at Nebraska we expect to play for National Championships. We believe that it is the best interest of both Bo Pelini and the University of Nebraska that at this time we part ways."
Bo Pelini could not be reached for comment but Twitter rumors had him as the leading candidate for the Miami of Ohio job once the season completed.
Eichorst told shocked media members that former Husker coach and Athletic Director Tom Osborne would coach the Huskers' final two or three games and they expect to begin the search for a new coach. Osborne did not comment.
WEDNESDAY. Kirk Ferentz had no comment on the coaching situation at Nebraska and only said that he thought they were a tough team and Iowa would have to execute to win. Ferentz added that his players are on Thanksgiving break from school but still working hard in the weight room and on the practice field preparing for Big Red.
Hawkeye Sports tweeted videos of the players preparing for Big Red
And another

THE HAWKEYES PLAY IN THE HERO'S GAME. The entire nation tuned in for #2 Iowa at #5 Nebraska in Lincoln. Tom Osborne led his Huskers onto the field wearing his traditional Apex windbreaker as the stadium rocked to Coolio's Gangsta's Paradise. The stage was set. Which team will prevail?

The Hawkeyes marched right down the field the opening drive and The Juggernaut punched in a touchdown from four yards away. The Huskers confused Iowa a little bit with a new 5-2 defensive look. Still, Iowa had no trouble drawing first blood and the score was 7-0.

The Huskers returned the next kick forty yards and had excellent field position to start their opening drive. Tom Osborne sent out his offense and after a brief huddle them came to the line in a wishbone formation. Quarterback Taylor Martinearz took the snap and after a fake hand off to the fullback tried to run around the end of the line. It appeared Osborne was going to try and beat the Hawkeyes with an offense that's 25 years past it's prime.

The option attack did little against a tough Hawkeye defense as they plugged the middle, covered the pitch man and smothered Martinearz when he tried to keep it himself.

The Nebraska offense and defense had an old school look
The drive stalled and Iowa again had the football and a 7-0 lead. At mid-field, Hawkeye running back Jordan Cantseeme would dart to his left and quickly spin towards the middle of the line to find no Nebraska defenders there. Cantseeme would carry the ball 52 yards for the score and Iowa was in the lead 14-0.
Osborne would stick to his guns running the option attack but it was going nowhere against the Hawkeye defense. Martinearz, with less than a week to practice, looked confused with the playbook and the passing game was off. Nebraska ran right into the face of the Hawkeye defense and they paid the price.
Martinearz keeps it on the option
This one was billed as a heavy weight fight prior to the opening kickoff. The Hawkeyes landed blow after blow in the early quarters and Nebraska, still running an option attack, was not built to comeback. Iowa's rushing attack recorded long run after long run, touchdown after touchdown, and this one was becoming a blood bath early.
At the half the score was Iowa 69, Nebraska 0. Still, Kirk Ferentz kept his foot on the gas and the Hawkeye running backs continued to gash the Nebraska 5-2 defense. Iowa would clear the benches and place every eligible running back in the game and they all managed to find giant holes and score touchdowns.
The Husker huddle finally revolted against the nostalgic play calls coming in from the sideline and they called their own plays in the huddle. It was mutiny on the field but Osborne declined to interfere since they were finally moving the ball. Nebraska was able to score three touchdowns in the second half but they still couldn't match Iowa's 35.
The game was so out-of-hand that by the fourth quarter the Hawkeyes were putting beat writers in the game. Pat Pharty, of the Iowa City Press Citizen, was roaming the sidelines during the fourth quarter and while attempting to lead the remaining Iowa fans in victory cheers he somehow managed to get in at tailback. Pharty would score from two yards out and that would be the game's final touchdown. 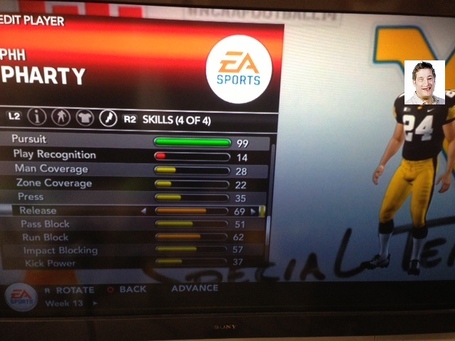 Iowa wins the Hero's game and the Big Ten Legends Division title in Lincoln. The final score, Iowa 105, Nebraska 21.
SCORE
TEAM STATS
INDIVIDUAL STATS (Iowa)
PASSING
E. Banks 5-6 196 yards 2 TD 0 INT
R. Rudock 2-2 87 yards 1 TD 0 INT
RUSHING
C. Vine 11-83 yards 2 TD
T. Juggernaut 10-163 yards 2 TD
E. Banks 9-102 yards 0 TD
J. Cantseeme 10-114 yards 3 TD
C. Barkley 5-37 yards 1 TD
M. Malloy 4-32 yards 1 TD
P. Pharty 2-4 yards 1 TD
RECEIVING
C. Fijgfdreqzcgh 2 rec 98 yards 1 TD
T. Acronym 1 rec 70 yards 1 TD
DEFENSIVE
A. Hitch 8 tackles 3 TFL
R. McSack 8 tackles 4 TFL 4 sacks
J. Morris 7 tackles 3 TFL
NEBRASKA NOTABLES
Taylor Martinearz finished the game early after getting smashed for the 20th time on the veer option. He finished 7 for 21 passing for 78 yards, zero touchdowns and three interceptions. He carried the ball 22 times for 54 yards and fumbled it once.
LOOKING FORWARD
Iowa wins their first Legends Division title and will head to Indianapolis to play for the Big Ten title. Purdue just had to beat their rival Indiana to win the Leaders Division but they fell short. They needed Ohio State to lose against Michigan but Urban Meyer had his team back on the right track and beat Michigan by 14 points. It's a rematch of one of the season's best games and the two best Big Ten teams in Indianapolis when Iowa and Ohio State play for the trophy.
Georgia and Alabama took care of business and they will meet for the second year in a row in the SEC Championship game. The winner has a definite spot in the BCS Championship game as Georgia is #1 and Bama #3. Iowa needs to win for the Big Ten's hopes of getting a National Champion. Ohio State is 9-3 and too far down the BCS rankings to earn a spot in the BCS final. Oklahoma sits at #4 and will be rooting for the Buckeyes next week.