Share All sharing options for: The Most Realistic Iowa Football EA Sports 2014 Simulation On the Internet | Michigan

THURSDAY EVENING. With all the pressure on the Hawks and their two biggest games left on the schedule they would need no distractions. That's in a perfect world and this is not. On Thursday evening, rumors began to circulate on Twitter that there could be an issue with Iowa's starting quarterback's eligibility. Cody Football played JUCO football in Arizona prior to joining the team at Iowa. At least that's what everyone thought.
Sports Illustrated writer Stewart Mandel would publish a report at approximately 9:00 pm (CDT) that alleged Cody Football wasn't in fact a real player at Iowa; the Hawkeye coaching staff had in fact been duped when they sought out the young man in the recruiting process. The Internet term for this action is called "catfishing." Former Hawkeye offensive coordinator Ken O'Keefe was the lead recruiter for Football and Mandel's report included the initial contact between O'Keefe and a person pretending to be Football using the Twitter handle @CodyFootball. 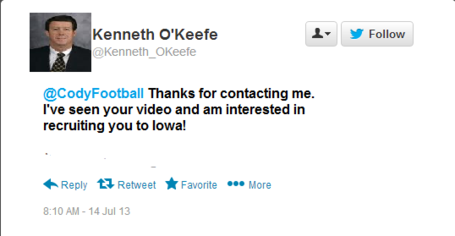 The person pretending to be Football signed a Letter of Intent and faxed it to Iowa on Signing Day 2012. Shortly after Signing Day, the Hawkeye coaching staff realized that Football wasn't a real quarterback, or even close to the person he claimed to be using his online identity. Embarrassed, coach O'Keefe left the Iowa program for the Miami Dolphins where he now coaches wide receivers. O'Keefe would not return messages or offer comment.
Kirk Ferentz admitted in a late night press release that indeed, the person playing quarterback for Iowa was not in fact Cody Football and Cody Football did not exist. Ferentz then dropped a bombshell on reporters when he disclosed that the person playing quarterback for Iowa was none other than Brad Banks, winner of the 2002 Davey O'Brien Award and runner-up in the 2002 Heisman Trophy voting. The NCAA would suspend Banks immediately and the Hawkeye season was in jeopardy of being lost.
FRIDAY MORNING. With media trucks swarming the football offices in Iowa City the Athletic Department remained silent. At 11:00 (AM) Gary Barta held a press conference that was carried live on ESPN. Barta said, "After a lengthy discussion with Mark Emmert and members of the NCAA, it was concluded that as long as Brad Banks legally changes his name to Epic Brad Banks he will be eligible for the 2013 football season per the NCAA's Epic Bo rule." Barta concluded, "Brad, or shall I say Epic Brad, is currently at the court house filling out the proper paperwork and will be ready to play for Iowa tomorrow."
Hawkeye fans rejoiced. College football fans growled.

Pretty excited that for my last homecoming as a U of M student we're playing Iowa! Who hates Iowa?!

BANKS WAS MOBBED DEPARTING THE COURTHOUSE. He offered a brief message for the crowd of media and supports. "I'm happy to finally have this all out in the open," said Banks. "I look forward to getting back on the field and getting to be myself rather than wear a disguise. I realize some people believe I shouldn't be eligible still, or at least eligible for awards but I did this for Iowa and the team. My only concern now is beating Michigan." 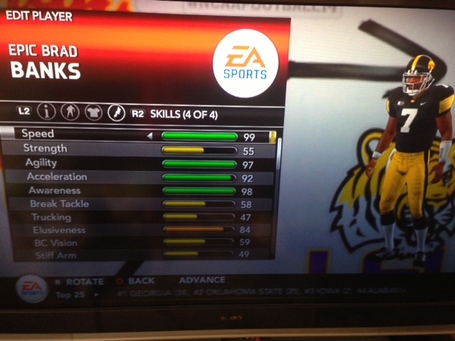 GAMEDAY. Michigan came to Iowa City ranked #13 in the nation. They have a potent offensive attack rated 9th in the nation at 446.3 yards a game. The Hawkeyes average almost 100 yards better with their top ranked offense. It's senior day in Iowa City and fans can again say goodbye to one of their most beloved players, Brad Banks.
Shedding the #19 for his old #7 Banks looked like his old self from the start. Epic Brad Banks would do exactly what was his new name says he'd be. Epic. The Hawkeyes took the ball first and immediately Banks dashed and danced down the field.
Epic Brad Banks was epic from the start
Banks was able to keep the opening drive alive by gaining a first down with his feet. On the very next play The Juggernaut will launch from midfield and make it 7-0 Iowa on 64 yard touchdown run. Michigan quarterback Lawnin Gardner picked up two first downs for his team but Iowa's defense held and the Hawkeyes again would have the ball. The second drive was more Epic Brad.
Really fucking epic
Banks dazzled, danced and picked apart the Michigan defense. At times you could see Iowa fan's jaws open in awe. The Juggernaut is considered the Heisman favorite on this Hawkeye team but on this day his performance would take a back seat to Banks.
To Michigan's credit, they never folded despite running into a buzz-saw with the hype surrounding this Iowa team multiplied by the revelation that Epic Brad Banks was leading them and on Senior Day. This one was quickly becoming a thing of beauty if you're an Iowa fan.
Really, really fucking epic
The Hawkeyes built a 34-0 halftime lead over the Wolverines. Banks finished the half 5 for 7 passing for 125 yards and added a rushing touchdown. The Juggernaut also had two rushing touchdowns and 71 yards on only three carries. Senior wide receiver and punt returner Jay Cotton celebrated his final game in front of home fans with an electrifying 68 yard punt return for a touchdown. Iowa was rolling and Kinnick Stadium was rocking.
Iowa still has plenty left to accomplish this season so Ferentz took it easy on Michigan in the fourth quarter. He did treat fans by allowing each senior to exit the game to a standing ovation when subbed for a reserve player. The Hawkeyes are 10-0 for the first time under Ferentz and one win way from claiming their first Legends Division crown. The final score, Iowa 55, Michigan 17.
Ferentz discussed the surprising blowout following the game. "That was shades of 2002 for sure," said the Hawkeye head coach. "We played a Northwestern team that year that I think had three wins. Michigan is a much better team, certainly, but I think we beat that team 62-10." The game Ferentz referenced was indeed Northwestern and the final score was 62-10. On that day, Banks finished with five total touchdowns and was 10 for 10 passing.
SCORE
TEAM STATS
INDIVIDUAL STATS (Iowa)
PASSING
E. Banks 6-10 188 yards 1 TD 0 INT
RUSHING
E. Banks 8-85 yards 2 TD
T. Juggernaut 6-208 yards 4 TD
RECEIVING
C. Fijgfdreqzcgh 4 rec 152 yards 0 TD
DEFENSIVE
R. McSack 8 sacks
J. Morris 6 tackles
MICHIGAN NOTABLES
Michigan quarterback Lawnin Gardner had a terrific day throwing the ball. He finished 19 of 21 for 159 yards but zero touchdowns. He was sacked 13 times which I think is a record.
LOOKING FORWARD. Nebraska was a winner and Iowa will head to Lincoln to play for the Big Ten Legends Division crown. The Huskers dropped their road game at UCLA in the early season and haven't lost since. The winner will face either Purdue, which takes on Indiana in their final Big Ten game of the season or Ohio State which travels to Ann Arbor to face the Wolverines. Both Purdue and Ohio State are 4-3 in the Big Ten and Purdue holds the tie-breaker due to a 28-24 win over the Bucks in West Lafayette.
The current BCS rankings go as follows: #1 Georgia, #2 Iowa, #3 Alabama, #3 Oklahoma and #5 Nebraska. The winner of Iowa at Nebraska will likely play in the BCS title game if they can also win the Big Ten Championship game in Indianapolis. The loser likely gets the Rose Bowl against the Pac-12's best team Stanford.
If it were any other season, Riley McSack could win a Heisman Trophy. His teammate, The Juggernaut is running away with the award given to the nation's best player. McSack's name is getting a lot of mention lately as his season total off 55 tackles and 39 sacks is amazing. The Juggernaut is closing in on a 2,000 yard rushing season and the single-season touchdown record. He currently has 1,746 yards on 148 carries and 29 touchdowns.