Share All sharing options for: The Most Realistic Iowa Football EA Sports 2014 Simulation On the Internet | Purdue

THE HAWKEYES TAKE TO THE ROAD TO PLAY PURDUE. Iowa is a perfect 9-0 heading to West Lafayette to face the Boilermakers. The Hawkeyes were a 42 point favorite on the road but that line quickly dropped as tragedy nearly struck the Iowa Football team. Senior linebacker and captain of the defense Jimmy Morris was hospitalized late Thursday evening after he attempted to trim his mustache with an electric razor. Morris is expected a full recovery but will miss the game at Purdue.
Prior to leaving for West Lafayette, Hawkeye linebacker Jimmy Morris and Chris Kirks share a touching moment
Hawkeye fans assumed junior linebacker Alton Q would start in place of Morris but Kirk Ferentz revealed that Q also had a slight injury and would miss the game. On the pregame radio show coach Ferentz said, "we're down two guys at linebacker and that's unfortunate. Purdue is a real tough team and we'll surely be at a disadvantage." Ferentz added, "I dunno, we may have to play the waterboy or something. Next man-in, that's how it goes." Ferentz went on to discuss the strong walk-on program at Iowa and concluded with "whoever gets the start today, I'm sure will play hard."

When the Hawkeyes took the field, it was The Waterboy that would start at middle linebacker. 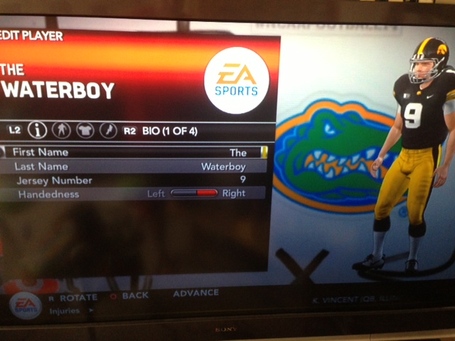 The freshman linebacker came to the Iowa program as a walk-on from West Bend-Mallard where he played eight-man football. He immediately calmed Hawkeye fan nerves when he played like no freshman. In fact, he played like a man possessed. Purdue quarterback, and eighth-year senior, Robert Marve, limped for his life from the onset of the game.
"Just wait until Doyle gets his hands on him," said Hawkeye broadcaster Gary Dolphin.
Purdue was over matched from the onset of the game. The defense dominated Marve and company and the Hawkeye offense carved right through the buttery Purdue defense. The Juggernaut found massive holes to run through and also showed off his agility . Juggernaut's first touchdown of the game came early in the second quarter and the electrifying run stirred Hawkeye fan memories of Shonn Greene's dominating performance versus Purdue in 2008.
The Hawkeyes took a 35-3 lead into the half behind the rushing of Juggernaut and the precision passing of Cody Football. Iowa's quarterback connected on three touchdown passes in the first half, all to different receivers. Purdue mustered only a field goal as Robert Marve struggled to find room in the Hawkeye defense.
"We didn't have a game plan for that waterboy," said Pudue coach Darrell Hazell during his halftime interview. "Maybe playing the eighth year senior Marve was a bad idea since he is a little less mobile," Hazell added. When quizzed on why Marve is even on the team Hazell replied, "we thought his eligibility had expired several years ago but he just keeps showing up." 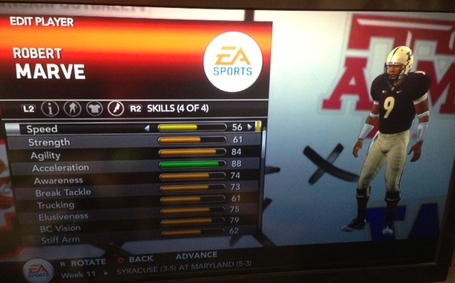 The Hawkeyes again were able to put it on cruise control in the second half against their fake rival. Iowa quickly added 21 more points in the third quarter before putting in the reserves. Marve added a Purdue touchdown pass but there still wasn't much to Boiler Up! about with Iowa out to a 56-10 lead.
The final from West Lafayette is 70-17 with Iowa in the driver's seat to claim the Big Ten's Legends Division title. The Waterboy would play the entire game and record an astounding 22 tackles including nine for a loss. He sacked Marve four times, forced a fumble and recorded an interception. Ferentz was asked immediately after the game if they overlooked the walk-on and he said,"I don't think so. That performance just came out of nowhere, certainly. Jimmy Morris should get out of the hospital next week and we hope to have him back in the lineup."
SCORE
TEAM STATS
INDIVIDUAL STATS (Iowa)
PASSING
C. Football 8-8 211 yards 4 TD 0 INT
R. Rudock 3-5 60 yards 1 TD 0 INT
RUSHING
J. Cantseeme 9-124 yards 2 TD
T. Juggernaut 9-146 yards 2 TD
RECIEVING
C. Fijgfdreqzcgh 4 rec 92 yards 1 TD
T. Acronym 2 rec 37 yards 2 TD
DEFENSIVE
T. Waterboy 22 tackles 9 TFL 4 Sacks 1 TFL 1 INT
PURDUE NOTABLES
Robert Marve finished the game 9 of 25 passing for 164 yards a one touchdown. Interestingly, his number of incomplete passes (16), was the exact same number of times the Big Ten Network showed his dad seated in the stands.
LOOKING FORWARD
The Hawkeyes will have another bye week next. The fun is really about to begin though. Iowa's last two opponents are both in the hunt for the Legends Division title. While Iowa was beating up on Purdue, Nebraska was taking Michigan to the woodshed beating the Wolverines 33-17. Michigan can still win the division title if they beat Iowa in two weeks and Nebraska drops two games. The Cornhuskers have Michigan State and Penn State left before they take on Iowa. Both Iowa and Nebraska are undefeated in conference play.
The Hawkeyes still sit behind Georgia at #2 in the BCS rankings. There's a new team sneaking up on the Hawks. Alabama is the new #3 as Oklahoma State dropped a shocker at Kansas. The Tide lost in week two to Texas A&M but got it rolling rattling off eight wins in a row. They sit at 9-1 on the season and have a cakewalk with an FCS team and then the rivalry game with Auburn left. Texas A&M is #4, behind the same Alabama team they beat. A&M lost to Arkansas in September but hold the SEC West tie-breaker over the Tide. The Aggies still have #20 LSU and #17 left on their schedule. The next highest rated Big Ten team behind Iowa is Nebraska at #6.