Share All sharing options for: The Most Realistic Iowa Football EA Sports 2014 Simulation On the Internet | Wisconsin

THE HAWKEYES RETURN HOME TO FACE THE BADGERS. From the tunnel emerged the Wisconsin Badgers and to the surprise of college football fans, Bret Bielema. Bielema left Wisconsin after winning the Big Ten Championship game last season for Arkansas. A brief pregame interview with Athletic Director Barry Alvarez informed television broadcast viewers that Bielema had a "coach only against Iowa" clause in his new contract with the Razorbacks. Alvarez thought the clause was a joke but after new coach Gary Anderson's 3-4 start he had his lawyers give Bielema a call. 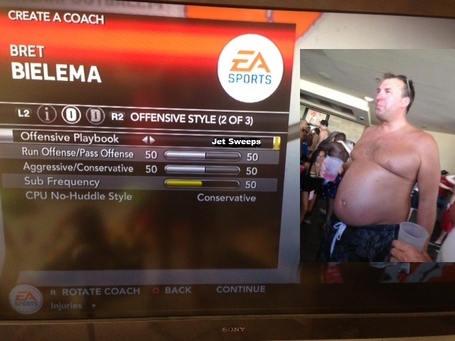 The Badger offense struggled as Bielema had his offense run jet sweep after jet sweep. The Badgers dominated Nebraska in the 2012 Big Ten Championship game with this same play and it was the only thing Bielema could remember of that night in Indianapolis. The Hawkeye defense had no problem stopping the sweep after it was called for the fourth time in a row.
Bielema called the Jet Sweep 30 times in a row
The Hawkeye offense had no problem getting things going against a terrible Wisconsin defense. On the game's first drive Cody Football found Iowa's fourth string wide receiver, Jarrod Uthoff, wide open in the end zone for the score. It was quickly 7-0, Iowa.
The Hawkeye offense got a boost from wide receiver Jarrod Uthoff of Fran McCaffery's basketball team. 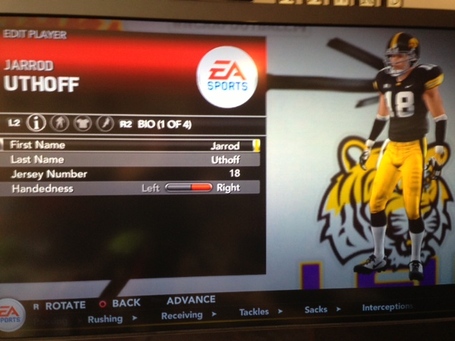 Uthoff transferred from Wisconsin to Iowa after one season and his move was nearly blocked by Wisconsin head basketball coach Bo Ryan. Uthoff found a loophole in the rules by becoming a member of the Hawkeye Football team. He can shoot, rebound and haul in a pass. His size on the perimeter turned out to be too much for the Badger secondary.
Uthoff with the score
Iowa had no trouble with the Badgers in the first half building a 35-0 lead. Finally, Wisconsin got on the board when Bielema remembered another play from his coaching days at Wisconsin. Facing a fourth down and forever he called for a fake punt and the upback rumbled down the field for a score. The Badgers would make it seven with the extra point but still trailed 35-7 at the half.
The BTN sideline reporter, J Lehman, was able to ask Kirk Ferentz about the fake punt while he was running to the locker room. Ferentz said, "yeah, we've seen that one before. I think we were kind of lulled to sleep there."
When the Badgers took the field after the halftime break Brett Bielema was no longer leading the team. "I'm taking over this half," said Barry Alvarez. "Bret is on the first flight back to Arkansas." Alvarez would have the Badger offense back to its more traditional self. Still, it was too little, too late for Wisconsin. Iowa had this one in the bag and put it on cruise control for most of the second half.
With the game well in hand there was a brief interuption as a fan burst onto the field late in the fourth quarter. From the Wisconsin section, near the South endzone, emerged an older gentleman from the stands that hopped the Kinnick wall and ran onto the field. Several Hawkeye cheerleaders report the man was yelling what sounded like "Uthoff! Uthoff!!" Police stopped the man after a brief chase and quickly escorted him off of the field.
Some old drunk bastard stormed the field yelling "Uthoff!! Uthoff!!"
The Sunday morning BHGP police blotter round-up didn't confirm suspicions on who the man was but it didn't debunk the rumors either.

The Hawkeyes claim the victory over the Badgers 56-14 and earn their third rivalry trophy on the season. "I felt we had a good week of practice and really prepared well," said Kirk Ferentz. "It was pretty easy defending the same play over and over, " Hawkeye linebacker Jimmy Morris told reporters after the game. Ferentz was asked if Uthoff could see a bigger role with the team down the stretch and said, "that's up to Jarrod, certainly. He maybe has other things to do right now. I wanted to make him a offensive lineman being 6'10" but Fran McCaffery felt otherwise."

TEAM STATS
INDIVIDUAL STATS (Iowa)
PASSING
C. Football 8-10 133 yards 3 TD 0 INT
R. Rudock 1-1 18 yards 1 TD 0 INT
RUSHING
T. Juggernaut 12-95 yards 2 TD
J. Cantseeme 9-116 yards 1 TD
C. Football 4-40 yards 1 TD
RECEIVING
C. Fijgfdreqzcgh 3 rec 41 yards 2 TD
T. Acronym 2 rec 59 yards
J. Uthoff 1 rec 25 yards 1 TD
DEFENSIVE
C. Kirks 8 tackles 2 TFL 2 sacks
B. Boots 5 tackles 1 TFL 1 INT
WISCONSIN NOTABLES
Wisconsin running back R. Fox was held to negative 27 yards on 12 carries. All 12 carries came on the jet sweep.
LOOKING FORWARD
The Hawkeyes move ahead to a match-up with hated rival Purdue. Iowa sits at a perfect 9-0 and are still the #2 team in the latest BCS rankings. Georgia remains #1 after an exciting 31-28 win over Florida. Iowa remains ahead of Oklahoma State which is the only other undefeated team in the nation. Big Ten and Legends Division foes Michigan and Nebraska are #9 and #10 in the BCS rankings. They will meet in Ann Arbor next week.
The Juggernaut is still considered the leading candidate for the Heisman Trophy despite being held to under 100 yards for the first time all season. Jugger will not break Shonn Greene's 100 yard game streak but he could still do what Greene couldn't, bring home the Heisman.
Award semifinalists have been announced and as you imagined, the lists are lined with Hawkeyes. Juggernaut is considered for the Maxwell Award, the Walter Camp and Doak Walker Award. R. McSack, J. Morris and Tiny Alvis are getting consideration for the Bednarik and Nagurski Awards. C. Fijgfdreqzcgh is the leading candidate to win the Mackey Award.
Riley McSack reacts to learning he's considered for several awards
Again, Purdue is next for Iowa and they are currently 3-5 on the season. They are #115th in total defense and that will only get worse after facing the country's best offense. Purdue is a -6 in turnover differential. Iowa will be favored by a bunch.