Share All sharing options for: The Most Realistic Iowa Football EA Sports 2014 Simulation On the Internet | Northwestern

THE HAWKEYES TAKE ON JUST NORTHWESTERN. Prior to taking the field, Northwestern head coach Pat Fitzgerald gave his team an inspiring speech about his playing days and what it means to really hate Iowa. "WHO HATES IOWA??" screamed an emotional young coach to his team which responded back "WE DO!!!"
Northwestern coach Pat Fitzgerald daydreams about his time as everybody's All-American

The Hawkeye offense was running on all cylinders early as the The Juggernaut slashed and gashed the Northwestern defense for big chunks of yards on the ground. The Hawkeye defense was stuffing the potent jNW option attack that troubled them so much last season and Iowa was off to a commanding early lead.

By the end of the first quarter The Juggernaut already had 11 carries for 99 yards and a touchdown. The Hawkeyes began the second quarter on jNorthwestern's one yard line and Jugger plunged ahead for another score making it 21-0, Iowa.

The Wildcats were uncharacteristically flat for being such a big game. With Iowa running away with an easy win, Fitzgerald was visibly becoming more and more upset on the sidelines. Perhaps, reaching his tipping point, Fitzgerald blew his lid after Cody Football scrambled from 20 yards to score another Hawkeye touchdown making it 28-0. Football had at least half of the field to scramble and Fitzgerald wanted a holding penalty on the Hawkeye offensive line.

The Hawkeyes were cruising at the half with a 42-0 lead. Cody Football was 8 for 9 passing for 200 yards and two touchdowns. The Juggernaut led Iowa with 15 carries for 126 yards rushing. C.J. Fijgfdreqzcgh had two receptions for 94 yards and a touchdown. The Hawkeyes were putting on an offensive clinic.
As Fitzgerald ran to the locker room for halftime he told BTN sideline reporter J Lehman, "THIS IS TERRIBLE! WE ARE PLAYING LIKE DOG CRAP!! IF THESE GUYS DON'T WANT TO PLAY, MAYBE I SHOULD DO IT MYSELF!!"
And attempt to do it himself he did. The Wildcats had a new middle linebacker to start the second half. An older, out-of-shape and smallish (for 2013 college football) man took the field with the last name "Fitz." 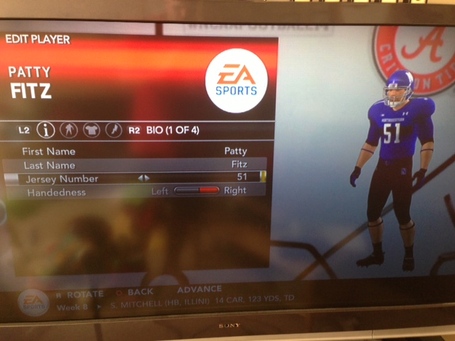 The addition to the Wildcat defense didn't provide the spark that it intended. The Juggernaut ran over, through and around the Cats weak defender.
Patty Fitz severely overestimated his ability to still play the game.
The few Northwestern fans that hung around through this beating lost interest in their team.
In the fourth quarter, with Iowa on cruise control, they worked the ground game and clock looking to get the win and escape without anyone getting injured. The Hawkeye running attack was unstoppable all day and The Juggernaut continued to pound the middle of the field where Fitz was roaming as an inept middle linebacker.
Coach? Pat? Lucas?
For the second time in his life, Fitzgerald would leave Kinnick field on a cart. Fortunately, this time was not due to severe injury but rather damaged pride. Fitz realized he wasn't 22 years old anymore and while in his mind he can still play the game, the results today proved otherwise.
The Hawkeyes win 56-14. Kirk Ferentz was asked about Fitzgerald taking the field for the second half and said, "I don't know really. I once wanted to buy a Corvette in my early forties but the wife put a stop to that. Maybe it was a mid-life crisis? Certainly." A crisis, indeed.
SCORE
TEAM STATS
INDIVIDUAL STATS (Iowa)
PASSING
C. Football 9-10 208 yards 3 TD 0 INT
R. Rudock 2-4 40 yards 0 TD 0 INT
RUSHING
T. Juggernaut 18-175 2 TD
J. Cantseeme 9-39 0 TD
C. Vine 5-25 2 TD
RECEIVING
C. Fijgfdreqzcgh 3 rec 102 yards 2 TD
J. Hills 3 rec 54 yards 0 TD
DEFENSIVE
R. McSack 6 sacks
H. D 2 sacks
jNORTHWESTERN NOTABLES
While embarrassing himself on the field Patty Fitz was able to record one tackle. A gracious official credited Fitz with the tackle even though The Juggernaut continued down field a few steps after lowering a shoulder pad and putting Fitz in the dirt. He's due to return to the jNorthwestern sideline as a coach next week.
LOOKING FORWARD
Iowa is off to an 8-0 start for the first time since the 2009 season. The Hawkeyes are now #2 in the BCS rankings behind Georgia. The Dawgs have a meeting with #11 Florida next week while Iowa stays home to host Wisconsin in the battle for the Heartland Trophy.
Ohio State quarterback Braxton M. has been dropped from the Heisman discussion as the Buckeyes lose for the second week in a row. Joining The Juggernaut is Texas A&M quarterback Johnny Hangover. The Juggernaut has 1,297 yards rushing on 121 carries. That's 10.7 yards per rush. He also has rushed for 21 touchdowns on the season.
Wisconsin is off to a 3-4 start under new coach Gary Anderson. They are 1-3 in the Leaders Division where Penn State has suddenly risen to the division lead at 2-1 in conference play. The Hawkeyes still are atop the Leaders Division but Michigan and Nebraska still are perfect in league play at 3-0.