Because what this party needs is a swarm of dudes in helmets.

For the millions of you who aren't paying attention, stage 16 of the 2013 Tour de France was raced today. The race has moved into the Alps, and today's leg ended with a long climb up the formidable Col de Manse. Portugese rider Rui Costa jumped out ahead of the pack during the final climb, drawing out fans who camp roadside for days to be in prime position during the ascent.

Those crowds don't just watch, either. They show up in costumes and masks to run alongside the competitors. They occasionally wear almost no clothing whatsoever for reasons passing understanding. And, more than anything else, they bring flags. Flags of their native countries, flags of the native countries of their favorite riders, and -- this being Europe -- regional flags (when the Tour started in Corsica this year, dozens of spectators rode horses near the peloton, waving the black-and-white Corsican flag like saddled-up Raiders fans).

Seeing as how it's a cycling contest in France and not College Gameday, you don't usually see many flags for college football teams. Which is why this sight, from today's ride up Col de Manse, was so incredible: 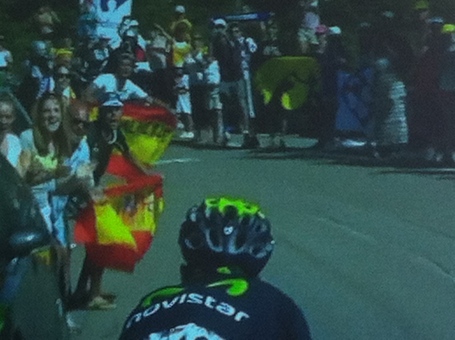 That's the tiger hawk being waved at Rui Costa. Because what else would you do when you've camped roadside for three days in the south of France but break out the black and gold?

(Oh, and BHGP bike jerseys came in this morning and are being UPS'd this afternoon. If you're within a state or two of Iowa, you should have them by the end of the week.)