Share All sharing options for: The Most Realistic Iowa Football EA Sports 2014 Simulation On the Internet | Ohio State

THE HAWKEYES HEAD TO THE COLUMBUS TO TAKE ON THE BUCKEYES. For the Iowa magical run to continue they need to get a win in Columbus, Ohio, for the first time since 1991. Ohio State has owned the Hawkeyes, winning five in a row and 12 of the last 14 meetings. The Shoe is the setting for Iowa vs. Ohio State. A game that may be a preview for the Big Ten Championship game in December.
Prior to the game, the Buckeyes announced the addition of a new member of their football team. Urban Meyer already has a potent offensive attack but cited EA Sports inclusion of Epic Bo Jackson in this year's game and that OSU would have their own epic running back to take on the undefeated Hawkeyes.
Epic Mo Clarett. 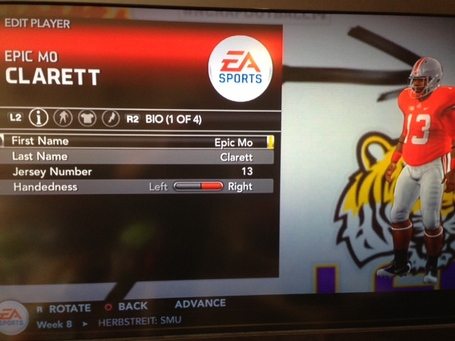 Epic Mo Clarett got the start at running back with Braxton M. running Urban Meyer's offense at quarterback. Clarett showed the Buckeye fans he still has it on the Buckeyes' first drive. His two weeks of training at his local YMCA for his upcoming attempt at Rugby had him in just enough shape to do some damage against the Hawkeyes.
The Buckeye potent offensive attack moved the ball against the Iowa defense but it was the Iowa offense that stole the show. Cody Football looked like he was from another planet. As if, perhaps, he was being touched by an angel.
Football completed a perfect 17 for 17 passes in the first half for 288 yards and 3 touchdowns. C.J. Fijgfdreqzcgh and Halright Hamilton were a big reason for Football's fantastic start. The Iowa tight ends were running routes as if uncovered by OSU defenders. The pair of Iowa tight ends accounted for 14 receptions for 177 yards and 2 touchdowns. Iowa led the Buckeyes 35-10.
The Hawkeyes were fortunate to build a huge first half lead because Ohio State and Heisman hopeful Braxton M. came to play in the second half. Ohio State would score the first two touchdowns of the half and cut Iowa's lead to 11. The Hawkeyes did respond and taking OSU's big right hook and put another six on the board when Football again found a tight end, H. Hamilton, in front of the goal line and he powered his way for the score.
The first play of the fourth quarter, The Juggernaut showed why some consider him the nation's best player. He took the handoff from the Ace formation and rumbled 71 yards for the touchdown. OSU's momentum had all but disappeared and it looked like Iowa could coast to victory.
With the game well at hand, Ohio State head coach Urban Meyer decided to keep his starters in and the foot on the pedal. Braxton M. and Epic Mo were able to eat up yards against Iowa's second unit players. The Hawkeyes were ahead 59-24 but Meyer pressed on. The Buckeyes scored to make the game 59-31 and Meyer called for an onside kick. This seemed to infuriate Hawkeye coach Kirk Ferentz. Who, reserved for most of the game, came alive for a short spell following Iowa's recovery of the kick. Meyer and Ferentz had a brief handshake at midfield following the conclusion of the game.
The Hawkeyes win 59-31.Following the game Kirk Ferentz was asked to comment on OSU playing out the game. Ferentz refused to answer and immediately responded with "ya know, we thought we were prepared for tonight's game but there was something else with us tonight. I can't put my finger on it but I felt it walking from the tunnel." The reporter began to respond with "you mean like a ...?" Ferentz interrupted with "Jim Zabel? Maybe? If Jim had anything to do with this I'm sure he's telling God he loves it, loves it, loves it, right about now."
R.I.P Z. We'll never stop loving it, loving it, loving it.

SCORE
TEAM STATS
INDIVIDUAL STATS (Iowa)
PASSING
C. Football 20-22 316 yards 4 TD 0 INT
RUSHING
T. Juggernaut 16-210 3 TD
J. Cantseeme 8-191 2 TD
C. Vine 3-18
RECEIVING
C. Fijghdreqzcgh 11 rec 136 yards 2 TD
H. Hamilton 6 rec 69 yards 1 TD
T. Acronym 2 rec 92 yards 1 TD
DEFENSIVE
J. Morris 9 tackles 3 TFL 3 Sacks
OHIO STATE NOTABLES
Heisman candidate Braxton M. had his best passing day of the year lighting Iowa up for 408 yards passing and added 94 yards rushing. He was able to rush for three TDs and another through the air. Epic Mo Clarett was held to 32 yards rushing on eight carries and added 51 yards receiving. Epic Mo returned to his Rugby league following the game.
LOOKING FORWARD
The win boosts the Hawkeyes to #3 in the BCS rankings which were just released. Ahead of Iowa is Georgia at #1 and Oklahoma State at #2. The loss to Iowa dropped Ohio State to #7 in the BCS. Michigan, a future Iowa opponent, is the next highest ranked Big Ten team at #14.
The Hawkeyes remain tied with Michigan atop the Legends Division standings. Nebraska had a bye week and are right behind both teams at 2-0 in Big Ten play. Northwestern, Iowa's next opponent, is 5-2 on the season and still very much alive in the Legends Division race at 2-1. The Buckeyes still are tops in the Leaders Division as they are the only team with two conference wins. Illinois and Penn State are in second at 1-1 in conference play.
Three players showcased in the Iowa at Ohio State match-up are being strongly considered for the Heisman Trophy. The Juggernaut and Oklahoma quarterback E. Pennington are considered the favorites. Iowa's Jordan Cantseeme and OSU's Braxton M. join Georgia running back A. Rucker on the Top 5. The Juggernaut is the only current player in the country to eclipse the 1,000 yard rushing mark. He currently has 1,122 yards on the season.
Pat Fitzgerald's WIldcats bring a potent offense but weak defense to Kinnick next week. The Hawkeyes top rated scoring, rushing and total offense will face the nation's 54th rated total defense. The Wildcats are especially weak against the pass and do surrender 133 yards on the ground per game. The Hawkeyes have this one circled as no doubt Pat Fitzgerald does too.