Share All sharing options for: The Most Realistic Iowa Football EA Sports 2014 Simulation On the Internet | Michigan State

THE HAWKEYES RETURN HOME TO FACE SPARTY. The Hawkeyes defeated Michigan State in East Lansing last season in overtime when former Hawkeye Greg Castillo intercepted Andrew Maxwell's pass. It's a match-up of one of the nations best offenses versus one of the best defenses.
Something curious took place just prior to kickoff. Rumors had circulated about some strange sightings when the Michigan State Spartans exited their team bus just outside Kinnick Stadium. There was this tweet from Cedar Rapids Gazette's Iowa beat writer Marc Morehouse:

That looks like Paul Crewe from Longest Yard and Florida State fame out there!

It was Paul Crewe! 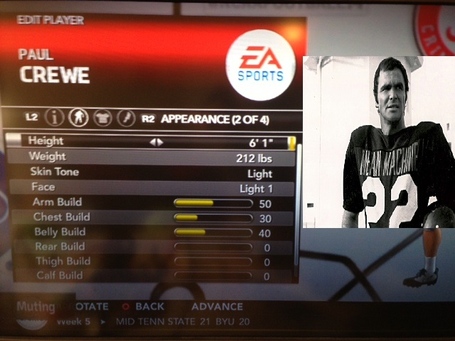 Spartan head football coach Mark Dantonio has a history of this sort of thing. In 2011, just prior to the game against Iowa in Iowa City, Dantonio allowed defensive back Chris L. Rucker to join the team after serving eight days in jail for a probation violation and DUI. Dantonio knew Iowa is tough and needed help on both offense and defense. This time he released the entire cast of the 1974 film The Longest Yard.
Big Ten Network pregame footage confirms the cast of The Longest Yard is suited up

The Hawkeye offense lost the coin toss and Michigan State elected to defer til the second half. Iowa did receive. Iowa has scored on every drive to start the game on the season. This drive would be no different. Facing a noticeably tougher defense than in weeks prior, the Hawkeye offense was stuffed inside the 10-yard line on their first possession but still came away with a field goal. Hawkeye kicker Michael Meyers would connect from 24 yards and it was quickly 3-0, Iowa.

Meyers would get injured on the ensuing kickoff to Michigan State and that left Iowa in an interesting situation. The EA Sports roster doesn't allow for Iowa's standard four place kickers so Iowa was left only with punter Conner Corn to do the kicking. This didn't sit well with Ferentz as Corn hadn't kicked an extra point or field goal since high school.

The Spartan defense was fierce, bottling up Iowa's offense and forcing Cody Football into mistakes. The Juggernaut was able to get a few yards on the ground but MSU's Samson was there for them when it counted playing his best defense in Spartan territory.

The Hawkeyes would try a field goal with :04 seconds left in the first half. Connor Corn, attempting his first college field goal ever, missed badly to the right and Iowa took a 3-2 halftime lead into the locker room. The Spartan offense sputtered despite the new additions on offense but their stout defense scored the team's only two points and was standing firm keeping the them in the game.

The third quarter was more of the same. Iowa found little room on offense and Cody Football was again sacked by the aggressive MSU defense in his own end zone and the Hawkeyes were behind 4-3. The Spartans were running clock hoping to get out of the Iowa City with the win.

The Hawkeye offense found it difficult finding a rhythm against defenders with their player rating sliders set to 0 for injury and 0 for stamina. Spartan defenders were constantly on the ground calling for a trainer. Perhaps strategy, whatever it was, it was working.

Halfway through the fourth quarter a Michigan State's drive stalled at mid-field and Dantonio would elect to punt the ball to Iowa with 1:38 seconds remaining. Iowa still had two timeouts.

The Hawkeyes drove the ball in small chunks at a time. Iowa utilized the draw play with The Juggernaut, screen passes with Cantseeme and quick passes to .C.J. Fijgfdreqzcgh. The Spartan defense was holding but Iowa was driving. The Hawkeyes reached the Spartan 20 yard line with 24 seconds to go.

Cody Football's pass on first down just sailed over the head of The Acronym.

On second down Iowa ran a quick out to the short side of the field and Mr. Wilson hauled in a Football pass for eight yards leaving Iowa at third and two on the 12-yard line.

Hawkeye offensive coordinator Greg Davis rolled the dice on third down and called the draw to C. Vine from the shotgun formation and Vine dragged tired MSU defenders to the five yard line. Football attempted to get the offense on the line to quickly spike the ball but they Hawkeyes looked confused and were forced to burn their last time out. Without a kicker and down two points the Hawkeyes would have one play to score from the five yard line to win.

Just as Ferentz was to send the offense on the field they heard a scream.

It was a child's voice from the tunnel leading to the Kinnick Stadium locker rooms. "HE'S ALIVE," the boy screamed at the top of his lungs. "HE'S COMING BACK!!!"

Michael Meyers had returned and walked to the field to attempt what would be the game's winning field goal.

A stunned Kinnick Stadium crowd watched as Iowa's psychotic murderer/kicker took to the field and Iowa lined up for the win.

The snap was good.

The kick was up.

The Hawkeyes win! Iowa remains undefeated on the season with an incredible win over Michigan State 6-4.
SCORE
TEAM STATS
INDIVIDUAL STATS (Iowa)
PASSING
C. Football 4-6 5 yards 1 INT
RUSHING
T.Juggernaut 19-134 yards 0 TD
J. Cantseeme 5-29 0 TD
RECEIVING
C. Fijgfdreqzcgh 2 rec 10 yards 0 TD
M. Wilson 1-8 yards 0 TD
DEFENSE
J. Morris 1 INT
B. Boots 1 INT
MICHIGAN STATE NOTABLES
Paul Crewe completed 5 of 11 passes for only 25 yards and had two interceptions. He was asked about his performance following the game and said, "It wasn't my day and we didn't get a lot of time to practice. Football has changed a lot since 1974 but I think I did okay for a 77 year old man." All of the MSU players added from The Longest Yard were returned to prison following the loss.
LOOKING FORWARD
The Hawkeyes have a much needed bye week following MSU and we'll sim right through that to the week of Ohio State. The Buckeyes are still undefeated and are ranked #2 in the nation. Iowa's 6-0 start has them up to #9 in the latest poll. This is the biggest game of the year so far, no doubt.
Iowa is tied with Nebraska and Michigan at 2-0 for the Legends Division title. Iowa and Ohio State are the only two undefeated teams left in the Big Ten conference (Michigan and Nebraska each lost a non-con game). Penn State sits in second in the Leaders Division at 1-1 in league play.
The Juggernaut is still considered one of the top candidates for the Hesiman Trophy. He leads the nation with 912 yards rushing and 16 touchdowns. Cody Football, despite the horrible showing against MSU still sits at a 212.9 QB rating. That's tops in the NCAA.
Iowa remains number one in the nation in points per game at 59.3. Ohio State isn't far behind at #5 with 40.3 points per game. Iowa's total offense is ranked #2 at 530.5 yards per game and Ohio State is #3 at 507.5 ypg. The over/under in Vegas is sure to be 75+ as these two explosive teams meet in what could be a preview of the Big Ten Championship game in Indianapolis.