Share All sharing options for: The Most Realistic Iowa Football EA Sports 2014 Simulation On the Internet | Northern Illinois

BY NOW YOU'RE FAMILIAR WITH THESE. EA Sports releases an annual edition of their college football game and bloggers around the world use EA's somewhat accurate rankings of college teams to simulate future outcomes of their team's season. We took a crack at this last season during Iowa's bye week before the game at Michigan State. Our sim managed to correctly predict the winner of that game, so, we thought (while there's still plenty of time), why not see how EA Sports College Football 2014 will predict the upcoming season.

While EA does a good job with their player ratings we feel that only us, true fans of the Hawkeyes, would know how to really rank our players. There's been some roster adjustments and the addition of player names (the default player identification is their position and number, e.g. CB #18). As to not get sued by Ed O'Bannon, there are some slight modifications with most of the player names. Here is a preview of some of the adjustments: 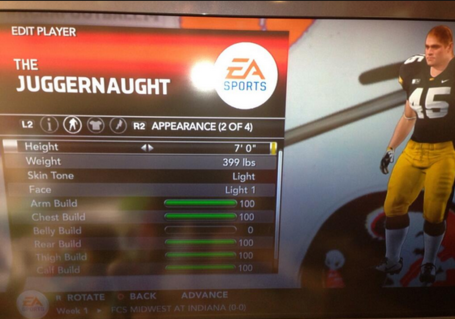 *The spelling error has been fixed 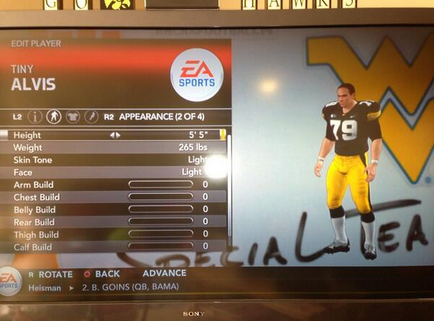 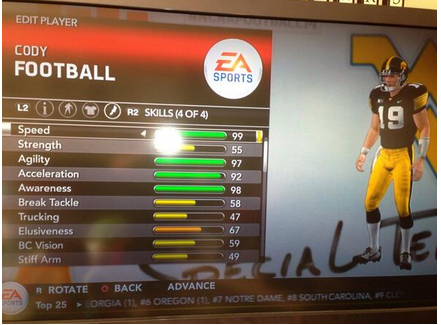 THE RECAP. EA Sports picked Iowa to finish 5th in the Big Ten Legends Division. The Hawkeyes enter the season unranked. Northern Illinois is ranked #24 on the game and prior to kickoff Kirk Herbstreit picked the Huskies to defeat Iowa in Kinnick Stadium.

The Hawks took the kickoff and methodically moved the ball down-field using mostly a heavily dose of The Jugger-Weisman and off-tackle runs. Perhaps feeding off the energy of the home crowd, Iowa took only one minute and thirty-two seconds of simulated game time to get a touchdown on the board thanks to a Weisman 1-yard plunge. Iowa would force NIU QB Jordan Lynch to throw it away on third down resulting in an NIU three-and-out. Iowa would again score on the next possession after moving the ball on the ground with Weisman and Cantseeme (formerly RB #33, aka Jordan Canzeri). Weisman would have his second TD on the season and Iowa took a quick 14-0 first quarter lead.

The second quarter was one to forget for Iowa. NIU would get on the board with a 27-yard touchdown run on a read option. With a 14-7 lead, Iowa would again go to the Juggernaut, getting his third TD of the half making the score: Iowa 21, NIU 7. NIU would answer with a quick TD pass from Lynch but Iowa's J. Cotton returned the ensuing kickoff 92 yards for a touchdown. By halftime the score was Iowa 31, NIU 21.

The Iowa defense would figure out the zone read option attack and shut down NIU in the third quarter. Iowa had trouble finding the endzone too but with :37 seconds remaining Cody Football found superstar tight end C.J. Fijafdreazcah (formerly TE #86, aka C.J. Fijafdreazcah) for a 7-yard touchdown.

By the fourth quarter NIU's Lynch had lost all of his mojo and his Heisman hopes are quickly fading. Iowa pounded the ball with Weisman and Canzeri and even got reps for the second team as Iowa put another 22 points on the board. The Hawkeyes win their season opener and against a scrappy ranked team. Perhaps it was a lot closer than Hawkeye fans had hoped. The offense ran the ball well but there's still a few kinks that need worked out. Still, it's about what you expect from the first game of the season. The final, Iowa 60, NIU 22.

Jugger-Weisman rips off a 52-yard touchdown

LOOKING FORWARD. The loss drops Northern Illinois from the Top 25 and the impressive win nets Iowa 47 votes, good enough for 29th in the poll. Weisman's performance was good enough to earn him Big Ten offensive player of the week honors.

Iowa next hosts some team named FCS Midwest. We won't live blog that as it'll surely be a 100-0 Iowa victory. After FCS Midwest is the first road game and a battle for the Cy-Hawk trophy in Ames. The Cyclones will enter that showdown with a loss as EA Sports again proves they know their football. The Clones lost to FCS Midwest in week one.