Indiana Hoosiers football unveiled an unprecedented five new helmet designs on Monday, including an audacious crimson and chrome design. Despite many voices to the opposite, it is a triumph.

Share All sharing options for: Indiana's New Helmets Are Awesome And Iowa Doesn't Gain Anything By You Hating Them

You might remember this teaser video from a few weeks ago, something that prompted wild (and weird) speculation from EDSBS and made us wonder just what the heck Indiana football was teasing for the 2013 season.

As it turns out, what they were teasing was plenty, with a full five new helmet designs, an on-field branding expansion almost as audacious as anything Oregon has recently attempted.

And while the homages to early football with things like jersey numbers on the side of the helmet (truly a classic-looking move, particularly on a white background, even if the team hasn't gone that route in over 50 years), what's really turning heads and writing headlines is the chrome helmet with crimson bands. 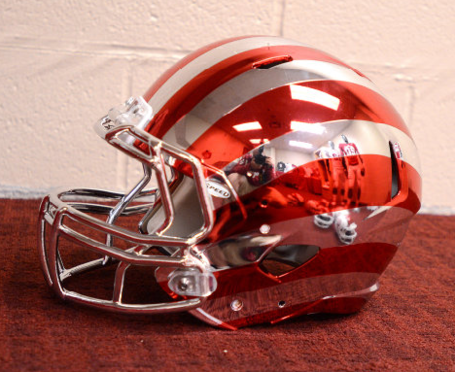 On its face and in a vacuum, it is a brilliantly flashy tribute to Indiana's striped history in basketball; this is a basketball school we're talking about, after all, and a basketball school's football program cannot just idly assume that basketball program does not exist. What it also is, is a design that will never show up on anybody else's helmet, not just because Indiana got there first, but because the design belongs to Indiana alone. The chrome is not new to college football, but the stripe design most certainly is, and what makes it uniquely Indiana's is those stripes. On that front, this is a triumph, the sort of thing that most schools endeavor to recreate.

But since this is the Internet and the Internet is where people can't have nice things, the immediate rush was to call the new helmets stupid and ugly and whatever else people call new helmets that aren't otherwise boring. It's wrong to say there's no middle ground; it's just that the last time we all agreed on a new branding, it was the Houston Texans' new helmets, and that was literally last century. At least when we all agreed we were all right; that's a great logo/scheme. I digress. 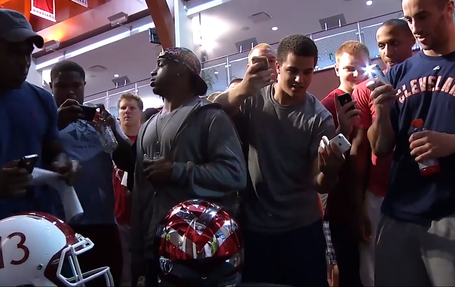 That is several, several Hoosiers all trying to get a picture of the new chrome helmet at once, to say nothing of the new, bold, different helmets that await them for their non-bechromèd games in 2013. And when you are an ascendant football program, the tantalizing promise of something new and different is precisely what you're trying to sell, as opposed to the approval of commentators these players are extremely unlikely to interact with. That's not a veiled blogger attack; name a mainstream outlet and I'll tell you a writer that schools like Indiana aren't interested in impressing. This is about the players, period, and the players reacted so positively to these new helmets that this is an unqualified success. And the "lol a guy fell down guess that's the Big Ten" jokes are so easy and uncreative. Congratulations, you found the default joke. You beat Super Mario Bros. 1-1.

Getting back to the important topic, the weird thing is that Iowa about 80% of the way onto this level. The willingness to embrace alternate helmets is already there. It's just that for whatever reason, it felt like Iowa's new special uniforms were always unveiled without any fanfare, so nobody had any idea about how awesome it was that a stodgy athletic department like Iowa's was willing to entertain silver domes of its own or other unorthodox uniforms. On that front, Iowa has thus far dropped the ball. It has shown the willingness to be as daring as just about anybody else in the conference when it comes to switching up uniforms. That is something that should be embraced and celebrated! Make it Iowa's mark!

Now, if you're a different team's blogger and you think this is a bad move by Indiana—just remember that on the unveiling of these new helmets, the players were gleefully snapping pictures of their new domes and not anxiously checking Twitter to see if anyone who likes a different team would approve of the new domes. The players do like them. That's all that matters—especially in recruiting. And as someone who writes Iowa football, it's pretty cool that Iowa got there just about as early and will (with any luck) keep staying on that front edge of cool-helmet-ology.

So when people say "hey this is really ugly and Iowa (or whatever school) shouldn't do it," um, yes, that school totally should. People are talking about frickin' Indiana football in June and it's not because a guy got arrested or a coach did weird things with the AD's wife. Indiana is thrilling its athletes and controlling its narrative here in the horse latitudes of the offseason. Again—that is a triumph.

And if you think you're doing Iowa a favor by saying what Indiana will be wearing next year is ugly, what you really ought to think about doing is asking the Iowa athletic department to grant the same latitude to the equipment department and Nike; a chrome Iowa helmet with a black Tigerhawk would be awesome as hell. And if you disagree, you should probably ask an Iowa athlete about the prospect of playing in one of those; our guess is the reception to that idea would be far better with the kids in Iowa City than it would be with some dour 40-year-old in Internetville.