We saw that Iowa somehow got an 88 from EA Sports. Now we're seeing who the video game likes the best. It... sure is something.

Share All sharing options for: The EA NCAA '14 Player Ratings For The Iowa Hawkeyes Could Use Some Revision

Remember yesterday's leak of the EA Sports NCAA '14 team ratings, the ones that inexplicably put Iowa on the level of Nebraska and above Northwestern and Wisconsin? Well, we're getting a little more data on that front.

Noted Internet Superstar PSD made a fine find today with the top 10-rated players on each roster of NCAA '14. You can check out the whole thing here, courtesy of Operation Sports, but look, you're at BHGP; you didn't come here to see who Marshall and Middle Tennessee State's top 10 dudes were, you care about Iowa's. So here's the relevant screenshot: 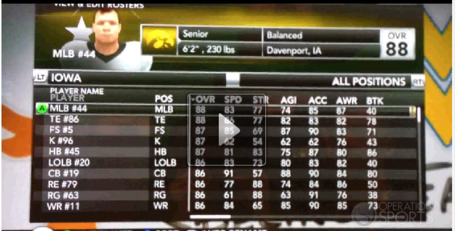 (grabs gasoline can next to lawnmower)

--what we can see from EA's choices for Iowa's top players--

(pours gas everywhere, then tosses empty can into comment thread)

--is that the top five players on the Iowa football roster--

--are all white dudes.

Yep, that's James Morris up top. We wouldn't necessarily agree, but we get it. Same goes for CJ Fiedorowicz also at 88, and seeing Mark Weisman at 87 is nice too.

Now, we haven't seen the full roster, and it's entirely possible that these ratings change between now and July 9, the game's official release date. It's probably getting a little late to be tweaking those ratings before it's time to be sending these games out, but I don't know video game production logistics so maybe there's still time. Anyway, what we're saying is that we're still working from a position of limited information when it comes to what the final complete roster and ratings are going to look like on the game.

That being said, what we see here is enough to make a couple assessments.

Tanner Miller - Put it like this: we're not entirely sure Miller is one of the top three safeties at Iowa, much less one of the top three players. While he improved from 2011 to 2012 and while he's the all-important senior calling the shots in the secondary, the fact is he made too many misreads and he doesn't bring much (speed, hits, ball-playing skills) to the table to make up for the gaffes. We're not ready to bench him by any stretch, but we're absolutely not buying his stock either.

James Morris - As mentioned before, his inclusion is understandable; we just don't agree. We have spent many words about the limitations Morris faces, all while acknowledging that he's the most important LB on the team, and we're not sure those limitations go away in any meaningful fashion in this, Morris' swan song in the black and gold. Shame, really; we do absolutely want to like him, but he's a step down from the MLBs we're used to seeing.

Dominic Alvis - C'mon. Bless his heart, he tries, but his rush off the edge is underwhelming and his best asset is an ability to keep his blocker engaged and away from the the next level. That's a good thing, but it's the type of thing you hope to see from most of your defensive linemen. Basically, you are never going to see Alvis take over a game. And he's an 86. Okay.

Carl Davis - We've seen Davis' ascent—or at least we have against friendly competition. He was impossible to block at times during the 2013 spring game and you might as well ink him into the starting lineup this year. He's big, nimble and strong, the kind of guy opposing lines have to dedicate two blockers to if they want to work up the middle. It's probably not a stretch to say he's Iowa's top defensive lineman this year.

Brandon Scherff - And as for Iowa's top offensive lineman, it has to be Scherff, right? He's in a program that churns out first round picks at left tackle, and what we saw before that awful injury against Penn State indicated that Scherff was filling that role quite nicely. The stretch run with Weisman worked best behind Scherff, who is an elite masher, and he's healthy enough that you can't dock him on ability because of that injury. Where the heck is he on this list?

C.J. Fiedorowicz - OK, it's hard to say that a guy whose overall rating is tied for the best on the team is somehow underrated, but Fiedorowicz is, at this point, far and away the best player on Iowa's roster—at least physically. He's got a monster frame, he blocks well, his speed is legit, and his hands are not a concern. Yes, he disappeared at times in Iowa's offense last year—some of that's on him, some of that's on an offense that was 60 minutes of lukewarm death—but if there's anyone on the Iowa roster who's a realistic candidate for First Team All-Big Ten this year, it's Fiedorowicz. A rating upwards of 90 seems appropriate for him, because if he doesn't have a monster year in real life, it's not because he's not good enough, it's because someone is screwing up horribly.